What happens if the US terminates NAFTA 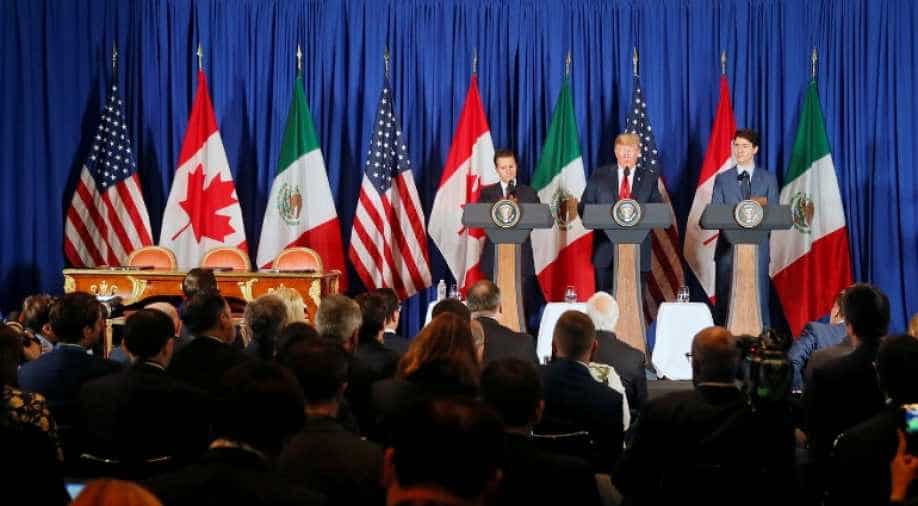 Trump said that if US lawmakers don't approve the new agreement, then the three countries would revert to the rules of trade that existed before NAFTA came into effect in 1994.

US President Donald Trump said on Saturday he would soon give formal notice to the US Congress to terminate the North American Free Trade Agreement (NAFTA), giving lawmakers six months to approve a new trade deal between the United States, Mexico and Canada to replace it.

Trump said that if US lawmakers don't approve the new agreement, then the three countries would revert to the rules of trade that existed before NAFTA came into effect in 1994.

It is unclear if Trump has the legal power to terminate NAFTA in the way he has threatened. The opposition Democratic party will soon have a majority in the lower house of Congress and has said it wants changes to the new trade deal, known as the USMCA.

Trump's threat raised fears that trade flows across North America could be disrupted if Congress fails to agree on the new deal before NAFTA expires.

Under the 1987 Canada-United States Free Trade Agreement, the two countries agreed to phase out most tariffs, a process that accelerated under NAFTA. The deal excluded dairy, poultry, eggs and sugar, but virtually all other tariffs were phased out by 2008. That means terminating NAFTA could have a limited impact on the movement of goods between the two countries.

But some trade experts have argued that because the agreement was formally suspended when NAFTA went into effect, both governments would have to take steps to put it back into force. If the old deal is not reinstated, a vast array of goods made in the United States and Canada would be subject to tariffs and cost more.

If NAFTA is terminated, goods traded between Mexico and the United States would attract "most-favoured-nation" or MFN tariffs, levied under World Trade Organization rules. That would raise prices of goods traded across the two countries.

While average MFN tariffs are relatively low, there is great variation between sectors. In the United States, duties are highest for clothing, according to the Pew Research Center, averaging 18.7 per cent or 15.8 per cent depending on whether the garment is knitted or crocheted. Vegetables face an 8.4 per cent duty.

Mexico's highest average MFN tariffs are on agricultural products - 21.4 per cent on dairy products, and 16.7 per cent on animal products, WTO data show. That could hurt US farmers who export to Mexico. The US poultry sector, which exports products worth more than $1 billion a year to Mexico, has warned that it could be hit hard.

NAFTA created special visas that give skilled workers such as software developers the ability to move between Canada, the United States and Mexico with relative ease. Ending the deal would be a blow to those workers and could create new costs and red tape for the businesses that want to hire them.

The United States and other countries often protect local industries from cheap imports with anti-dumping duties, special tariffs that are allowed under international law when foreign companies are selling goods below their true market value. But market value is often a subject of debate.

That's why Canada insisted that NAFTA include a dispute settlement mechanism that makes it possible to challenge anti-dumping duties in front of a bi-national panel, not just in local courts. Terminating NAFTA would end this system, potentially exposing companies in all three countries to more anti-dumping duties.

NAFTA reduced investment restrictions in a number of sectors, creating opportunities for businesses to move outside their home countries.

Canada's Bank of Nova Scotia, for example, now has substantial operations in Mexico and lobbied hard to for a NAFTA deal, meeting with governments and businesses in both countries.