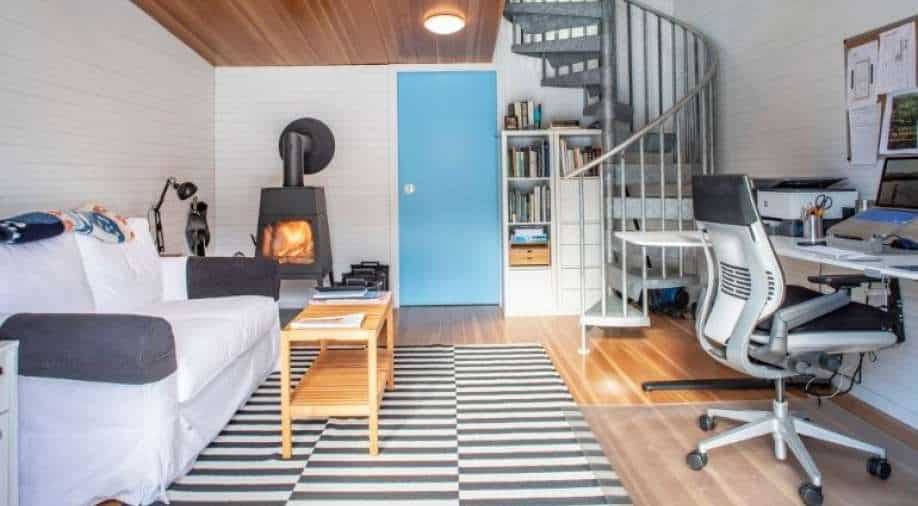 The pandemic has seen a number of design professionals taking on DIY projects, sometimes with spectacular results

If the average person were to hollow out a tree branch, turn it into a light fixture and hang it over a dining room table, it would look like the work of a Cub Scout. But in Constantin Boym’s weekend home in New York state’s Hudson Valley, the branch is perfection. Not too crusty, not too knobby, so artless as to be almost invisible.

Boym, chair of the industrial design department at Pratt Institute in New York and co-principal with his wife, Laurene Leon Boym, of design company Boym Partners, is very good at making things and has recently had lots of opportunities.

Sequestered with his family for 18 months in their 1955 cabin in Esopus, New York, he embarked on a long busman’s holiday. Inside, he designed a second bedroom for the couple’s 24-year-old son, Rob, and a mudroom where the refrigerator and laundry appliances could live.

Outside, he introduced to the property’s 8 acres a fire pit, a “village” of acquired birdhouses in various architectural styles, a tomato garden, a pavilion with a faux deer trophy that he assembled from found wood (part of a series Boym calls “Upstate Safari”) and a metal sculpture on the site of a recently cleared glass-and-metal scrap pile, made from detritus found there (“I think something from a baby carriage,” he said).

Laurene Boym, who has recently taken to making ironic drawings of controversial consumer products like Land O’Lakes butter and Sun-Maid raisins, received a new studio extending from a woodshed.

For people fortunate enough to own a country home during a pandemic, the relief of having a refuge is often tempered by the stresses of making it work. Stuffing a weekend house with a full complement of family members puts a strain on more than the septic system. And with the shortage of available contractors and the scarcity and expense of building supplies, it hasn’t been easy to renovate one’s problems away.

Which gives designers like the Boyms an advantage: Subjected to the same pandemic conditions as the rest of us, they are equipped to make scrappy home improvements that help maintain their sanity. They can act as their own general contractors, nudging the results they want from builders, electricians and plumbers, or they can do the jobs themselves, without making them look DIY.

It pays to be hands-on and off-the-shelf (or out-of-the-forest). Constantin Boym estimated the cost of the art studio, built with hired help, at $20,000. Yet choosing humble materials like $27 worth of pressure-treated lumber for an outdoor bench that will last a half-century is not just a matter of thrift, he said, but a commentary on consumption. He quoted Russian constructivist artist Vladimir Tatlin’s support of “not the old, not the new, but the necessary.”

Boym found it necessary that the bench hang around long enough to merge with a tree trunk, fitting into a notch carved into the seat. It was also necessary that another bench be built from logs embedded with oyster mushroom spores that will erupt over much of the piece. A third bench, up the slope, includes a cocktail or beer bar.

If he had his way, Boym, who was born in Russia, would also have included Soviet-style statues — a worker or “a girl with an oar” — but they are not so easy to find, he said.

Twenty-five miles northeast of Esopus, in the Columbia County hamlet of Elizaville, New York, Peter Matthiessen Wheelwright was finding it necessary to finish his second novel. An emeritus architecture professor at Parsons School of Design in New York, he had been working on the book for six years and had hit a dry patch when the pandemic struck. Wheelwright bolted with his wife, Eliza, for their little gambrel-roofed house on 200 acres. They had bought the property, a former marijuana farm, in 1986, after it was seized by authorities.

“I wanted a place to really get out and howl at the moon,” he said. But with children and grandchildren swarming in less than 2,000 square feet, there was no quiet place to write.

“As an architect, I’ve never really had a chance to do a little free-standing thing for myself,” he said, making it doubly rewarding to design a tiny studio with a sleeping loft. Construction began with the first COVID-19 stirrings, so he was able to secure most of the materials and labor before they were swamped by demand. The building is heated with a Danish wood-burning stove and has hot and cold water supplied by an office water cooler mounted over a sink that drains into a downspout. There is also a composting toilet and an elevated deck pierced by a fire cherry tree.

The job wrapped up in six months, a labor of love but not economy. “It’s the famous triad that good architects will explain to their clients,” he said. “You want it fast, you want it cheap, you want it well done. Pick two.”

Wheelwright wanted it fast and with high-quality windows and doors, an angled ceiling and bead-board paneling instead of Sheetrock. He estimated the cost at $150,000 to $160,000.

Eight months later, his book was done. “The Door-Man,” a multigenerational saga that centers on the fossil discoveries of real-life 20th-century paleontologist Winifred Goldring, is due out Feb. 1 from Fomite Press.

A bit south, in the Dutchess County town of Rhinebeck, New York, Calvin Tsao and Zack McKown were also galloping to complete a small outbuilding on a large, rural parcel. The New York-based architects, along with their domestic partner and financial manager, David Poma, had been occupying a renovated gatehouse on 82 acres of protected land as their weekend home, but its 800 square feet left no room for hobbies, much less work. Limited by covenant to 600 square feet for the new structure, they laid out three small studios side by side, connected by a pair of bathrooms, one with a toilet, the other with a shower.

“We wanted to use every bit of space,” Tsao said. “I always thought that corridors were pointless.” The trio of rooms can also be reached from a common screened porch at the end.

The building looks out to an apple orchard and is painted a color based on tree bark samples collected by the architects and mixed by Benjamin Moore. “Six hundred square feet for a studio is not meant to be a razzmatazz design statement,” Tsao said. It is meant to blend in with the flora.

The building nevertheless had a razzmatazz price — $350,000 — despite the use of engineered flooring, supplies from the local lumberyard and hardware store, and only a slight indulgence in Heath tiles for the bathrooms. “The cost of construction is just skyrocketing,” Tsao said.

A bit of the budget was shaved when they needed a column for the breezeway. “We just bought a tree trunk for, like, $12,” he said.

Started before the pandemic, the house was finished in May 2020, becoming a remote office, where the partners work on projects like rebuilding the National Palace Museum in Taipei, Taiwan.

The rural setting has rubbed off on them in profound ways; they are reclaiming oversight of the apple orchard, which had been outsourced to a local farmer, and turning it organic. “We want to spend more time here to truly understand what agrarian life and culture is about,” Tsao said.

Architecture is among the most restless of professions, with its far-flung client meetings and site visits. For an architect, to be locked down in a well-appointed studio is likely to feel unnatural. To be locked down in one’s home could easily shade into torture.

“I was working in about 15 square feet in my bedroom, and trying to coordinate showers and changing clothes and making the bed,” Ryan Mullenix, a partner at Seattle architecture firm NBBJ, recalled about the period in which he was under one roof with his wife and three remote-schooled children. What emerged out of desperation (plus an architect-build-it-thyself urge) was a 70-square-foot free-standing office in his backyard in suburban Bellevue, Washington.

The co-lead of NBBJ’s corporate design practice, Mullenix was like a scientist dosing himself with his own serum. His advice for clients trying to adapt workplaces for the future, he said, is to “test it — don’t try to make it perfect the first time out.” His little office is a model of minimalism just waiting to be tweaked.

Begun in June 2020, the project took a year to complete, with materials costing about $10,000. Mullenix did the work himself in his leisure hours, aided sometimes by friends and a professional electrician. He made dozens of trips to Home Depot and sanctioned only two custom moments in the form of a pair of sliding-glass doors for views and cross-ventilation. And, OK, the floor has radiant heat.

Two hours west of Seattle, at the tip of the Toandos Peninsula, Kristen Becker has spent her pandemic weekends learning to use a chain saw, drive a tractor and demolish a carport. This knowledge has all been in the service of renovating an old house that she and her husband, Saul Becker, bought three years ago after learning that it had once belonged to Saul Becker’s grandfather, who gambled it away in a drunken poker game. The couple, partners in Seattle-based architecture and design company Mutuus Studio, paid $139,000 for the dilapidated three-story building, which had been abandoned for a decade. Gradually, they fixed it up as a weekend retreat and design laboratory.

Aiming for a cabin vibe, the couple created a sleeping loft for their two children that was “open to the kitchen, to voices and evening conversations, to the sound of the fire crackling,” Kristen Becker said. On the lower level, they furnished a game room with a free pool table they were offered unexpectedly one night, and dismantled and carted home. (Kristen Becker was in heels.)

As for the experimental part, “I’ve been suspending metal lampshades in the canal and growing barnacles on them as part of making fixtures for the house,” said Saul Becker, who trained as an artist and designs lighting for the company. His laminated linen and canvas panels, reminiscent of fine-art paintings and proletarian drop cloths (he has experience with both), were used on lamps and kitchen cabinet fronts. The crushed shells of oysters pulled out of the bay nearby became countertop material.

Kristen Becker calls the vintage finds she likes to collect and restore “puppies.” She described the house as “a very large puppy.”

“It’s going to be endless, a lifetime project,” she said. “Check back next year.”