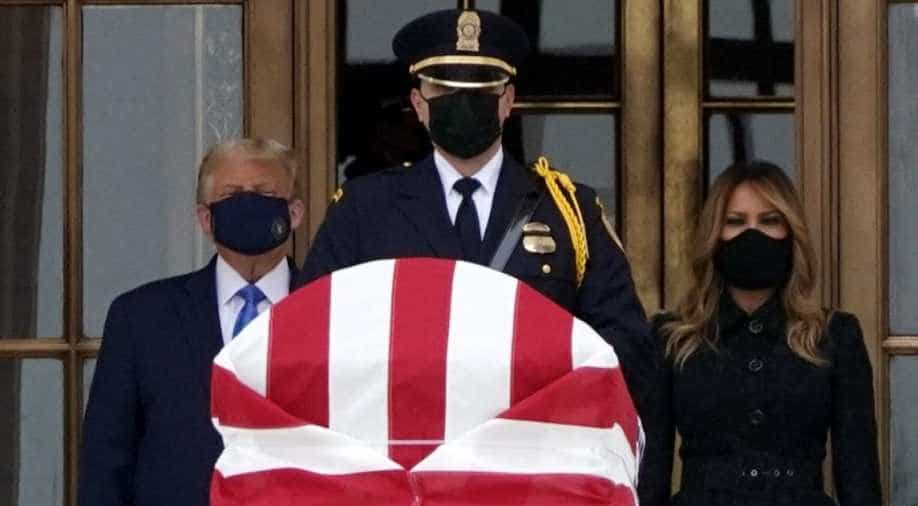 US President Donald Trump (L) and First Lady Melania Trump (R) pay their respects to US Supreme Court Justice Ruth Bader Ginsburg as she lies in repose in front of the Supreme Court in Washington, DC Photograph:( AFP )

Trump drew criticism in recent days for not honoring Ginsburg's wish at the end of her life, reportedly dictated in a statement to her granddaughter, that she be replaced by the next president.

US President Donald Trump was greeted with jeers and boos on Thursday as he visited the late Supreme Court Justice Ruth Bader Ginsburg's flag-draped coffin outside the U.S. Supreme Court, by a crowd who had gathered to honor the liberal justice.

Trump, wearing a black face mask and accompanied by first lady Melania Trump, stood near the casket at the marble court building amid boos and chants of "vote him out." The moment highlighted the public flashpoint Ginsburg's death has become ahead of the November 3 presidential election.

Trump at the court as crowd chants “vote him out” — it’s rare for this President to see his opposition this up-close and in-person pic.twitter.com/VEVkRHOkjM

The Republican president, who has already installed two top court picks since taking office in 2017, said earlier he would unveil his latest choice on Saturday, a week after the 87-year-old justice died on September 18.

Also read: Is there a link between Trump's Supreme Court candidate and 'The Handmaid's Tale'?

His decision to move quickly on a replacement less than two months before the election has drawn sharp battle lines between Republicans and Democrats, and reshaped the race as Trump seeks re-election during a coronavirus pandemic that has killed over 200,000 people in the United States and devastated the economy.

Ginsburg, appointed by Democratic President Bill Clinton in 1993, was an icon for liberals, especially as the court grew increasingly conservative. Her death has sparked a renewed push by Democrats to get people to the polls in November and an outpouring of campaign donations.

Before the 2016 election that made Trump president, Ginsburg criticised him publicly, calling him "a faker" in one interview. Trump responded by writing Ginsburg's "mind is shot" on Twitter. She later apologised saying she regretted the "ill-advised" comments.

Trump drew criticism in recent days for not honoring Ginsburg's wish at the end of her life, reportedly dictated in a statement to her granddaughter, that she be replaced by the next president.