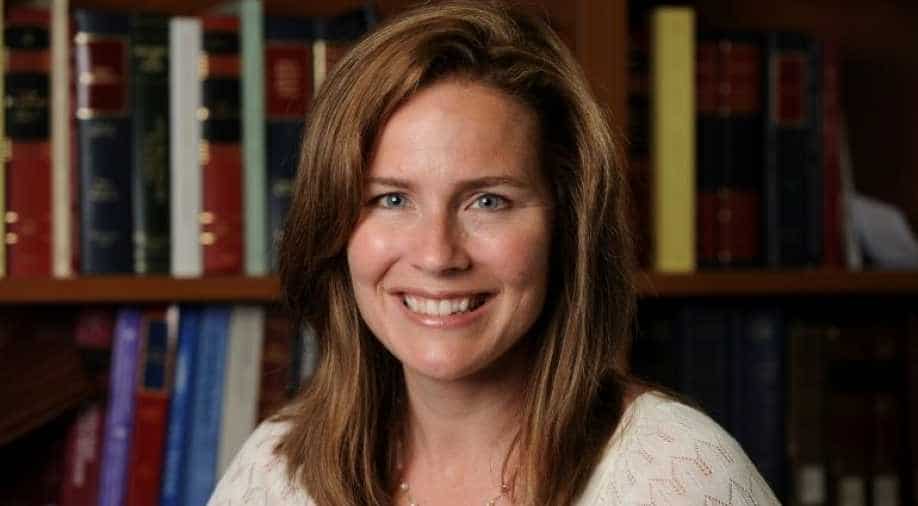 Barrett has been a part of a ultraconservative Christian community called People Of Praise which has freakish similarities to the male-dominated socity of Margaret Atwood's novel 'The Handmaid's Tale'.

Judge Amy Coney Barrett, who has been shortlisted by US President Donald Trump as one of the candidate for the nine member Supreme Court bench, has been generating a lot of curiosity for reasons not related to her work.

According to reports, Barrett has been a part of a ultraconservative Christian community called People Of Praise which has freakish similarities to the male-dominated socity of Margaret Atwood's novel 'The Handmaid's Tale'.

Set in a dystopian world, 'The Handmaid's Tale' explores themes of subjugated women in a patriarchal society and the various means by which these women resist and attempt to gain individuality and independence.

Many term the group as an unusual mix of Roman Catholic and and Pentecostal traditions. In factm until 2018, it used the term ‘handmaid’ for its female leaders.

There has been a renewed interest in the group ever since Trump named Barrett as one of his shortlisted candidates for the elevation to the Supreme Court.

So far, the conservative group has not confirmed or deniyed whether Barrett was a member.

The group’s spokesman, Sean Connolly, told Reuters that women were not considered subservient in People of Praise and that many hold leadership roles, such as directing schools and ministries.

Barrett did not respond on Tuesday to requests for comment about her membership in People of Praise made through a clerk at the Chicago-based 7th Circuit.

Sharon Loftus, a judicial assistant to Barrett, said in an email the judge`s policy was not to give interviews or comments to the media.

Trump has said he plans to nominate a Supreme Court justice this week to replace Ruth Bader Ginsburg, who died last Friday. He said he is considering Barrett as well as Barbara Lagoa of the 11th US Circuit Court of Appeals in Atlanta.

People of Praise has about 1,700 members in 22 cities in the United States, Canada and the Caribbean, according to its website, and was founded in 1971 in South Bend, Indiana, also the home of the Catholic-led University of Notre Dame.

"We admire the first Christians who were led by the Holy Spirit to form a community," the website says, tracing its origins to the late 1960s when students and faculty at Notre Dame experienced "a renewal of Christian enthusiasm and fervor, together with charismatic gifts such as speaking in tongues and physical healing."

Its most devoted members make a lifelong commitment to the group, known as a covenant.

From 1970, women with leadership roles in the organization were called handmaids, but that changed following the popular 2017-to-present Hulu television series "The Handmaid`s Tale," based on a 1985 book by Margaret Atwood. The dystopian story is set in a future United States where the rules of the male-dominated society are based on the leaders` twisted interpretation of Old Testament scriptures.

"Recognizing that the meaning of this term has shifted dramatically in our culture in recent years, we no longer use the term handmaid," the group said in 2018, without specifically attributing the change to the show.

Coral Anika Theill, a former People of Praise member, has been strongly critical of the group, calling it a "cult" and saying in an interview women are expected to be completely obedient to men and independent thinkers are "humiliated, interrogated, shamed and shunned."

Theill, who last year wrote a blog post entitled "I lived the Handmaid`s Tale," said she planned to call every US senator to oppose Barrett should she become Trump`s nominee.

Reuters could not independently verify her account. When asked about Theill`s allegations, People of Praise spokesman Connolly said the group followed Christian teachings that "men and women share a fundamental equality as bearers of God`s image."

Thomas Csordas, a scholar of comparative religion at the University of California, San Diego, said People of Praise was "very conservative" but that he would not consider it a cult, adding that some of the charismatic Christian communities he has researched were more authoritarian than People of Praise.

In popular culture, the word cult can connote brainwashing and authoritarianism, he said.

"My position to the press was that People of Praise is best described not as a cult but as a religiously-based `intentional community,`" Csordas said in an email.

"When I first encountered Atwood`s book, I was frankly jolted by the similarity of terminology to that prevalent in some of the Catholic charismatic `covenant communities` I had been studying," Csordas wrote in a 1996 paper called `A Handmaid`s Tale,` without specifically referencing People of Praise.