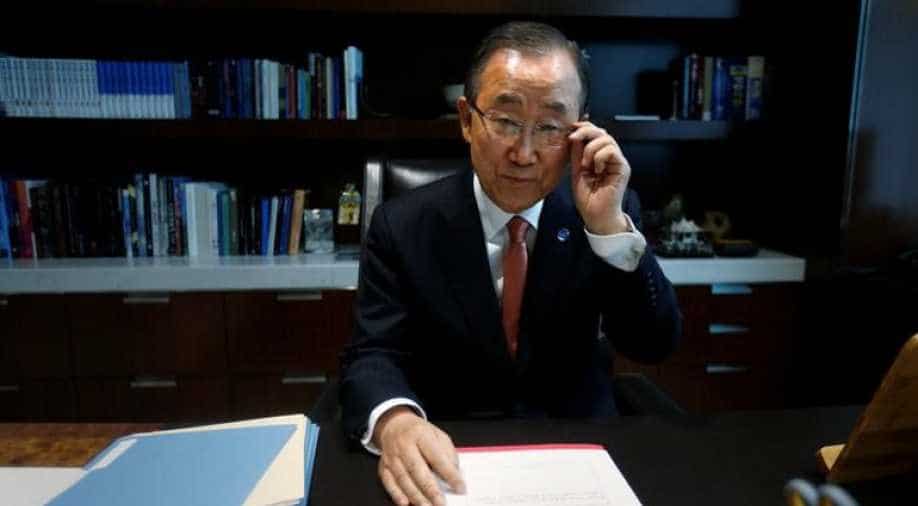 Ban has been expected to join the Saenuri Party of President Park Geun-hye if he runs for president. Photograph:( Reuters )

UN Secretary-General Ban Ki-moon, once seen as the front-runner to become the next president of South Korea if he decides to run, has slipped to second place in public support amid a political crisis engulfing the current leader, a poll suggests.

Ban has been expected to join the conservative Saenuri Party of President Park Geun-hye if he runs for the top post in the election scheduled in December 2017, although the UN chief has yet to declare he is considering a run.

Support for Ban slipped to 17.1 per cent in an opinion poll conducted last week according to Realmeter on Monday, the first time he has dropped from first place since June when South Korean pollsters began including him among potential candidates.

He was overtaken by the likely candidate for the opposition Democratic Party of Korea, Moon Jae-in, who received 20.9 per cent, the poll, conducted with 2,528 people, showed.

Park's presidency has been rocked by a scandal involving an old friend, Choi Soon-sil, who is alleged to have used her closeness to the president to meddle in state affairs.

Park, 64, has publicly apologised twice for the scandal but her approval rating has plunged to just 5 percent according to a Gallup poll released on Friday, the lowest since such polling began in 1988.

Ban's support base was expected primarily to be older voters and those in the conservative southeastern region, the same voter bloc that was core to Park's election win in 2012.

The decline in Ban's support came amid a rapid flight of Park and Saenuri supporters, Realmeter said in an analysis.

Park last week named a new prime minister and finance minister but the moves were denounced by opposition parties as a bid to divert attention from the scandal.

Tens of thousands of people, possibly as many as 100,000 according to rally organisers, filled the streets of downtown Seoul on Saturday calling for Park to step down.