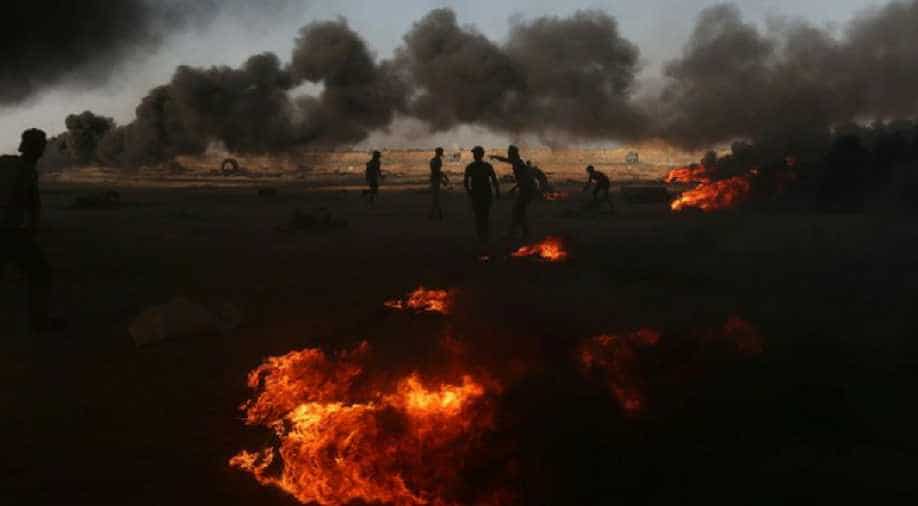 The clashes took place nearly a week before the first anniversary of the protests, when organisers have pledged larger than usual demonstrations.

Two Palestinians were killed by Israeli fire in renewed clashes along the Gaza border Friday, the health ministry in the enclave said.

The clashes took place nearly a week before the first anniversary of the protests, when organisers have pledged larger than usual demonstrations.

Jihad Harara, 24, was shot in the head east of Gaza City, while Nidal Shatat, 29, was hit in the chest near the Al-Bureij refugee camp in central Gaza, Qudra said in a statement. He had previously said Harara was 18.

At least 62 other people were shot, Qudra said.

The Israeli army did not comment on the deaths but said "approximately 9,500 rioters and demonstrators" gathered in various locations,  "hurling explosive devices, hard objects and rocks" at troops.

Troops were "firing in accordance with standard operating procedures," a spokeswoman said.

The often violent protests are demanding Palestinian refugees and their descendants be allowed to return to former homes now inside Israel.

Israeli officials say that amounts to calling for the Jewish state's destruction, and accuse Hamas, the Islamist movement that runs the Gaza Strip, of orchestrating the protests.

Speaking to the demonstrators, Haniya said they were there to "send a message to the occupation that we will not stop until we uproot the occupation from our land."

He called for thousands to gather for the anniversary on March 30.

At least 257 Palestinians have been killed by Israeli fire in Gaza since weekly protests began nearly a year ago.

Most have been killed during protests, though others have died in airstrikes and by tank fire.

Two Israeli soldiers have been killed.