'They should be focused on much bigger things!' Trump criticises NASA moon mission 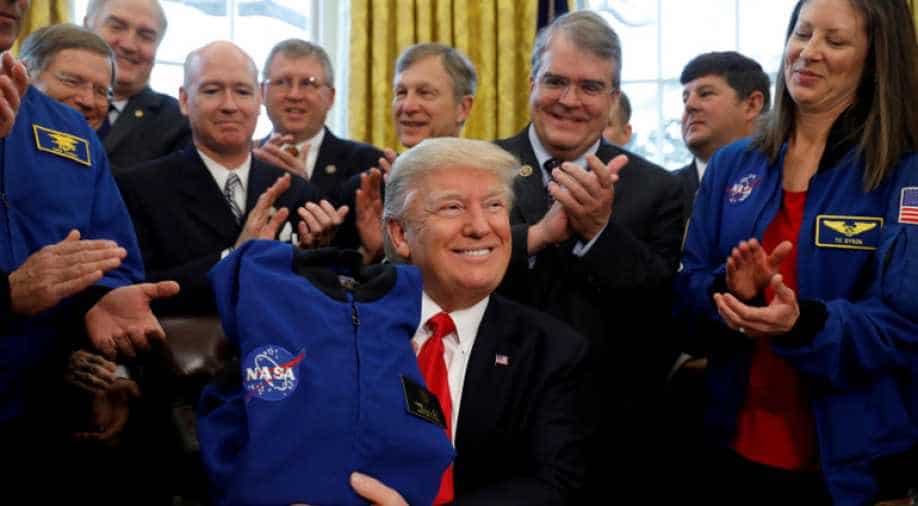 US President Donald Trump receives a NASA jacket during a signing ceremony for S442, the NASA transition authorization act, in the Oval Office of the White House in Washington. Photograph:( Reuters )

US President Donald Trump on Friday criticised NASA for aiming to put astronauts back on the moon by 2024 and urged the space agency to focus instead on 'much bigger' initiatives like going to Mars, undercutting his previous support for the lunar initiative.

US President Donald Trump on Friday criticised NASA for aiming to put astronauts back on the moon by 2024 and urged the space agency to focus instead on "much bigger" initiatives like going to Mars, undercutting his previous support for the lunar initiative.

"For all of the money we are spending, NASA should NOT be talking about going to the Moon - We did that 50 years ago," the president wrote on Twitter. "They should be focused on the much bigger things we are doing, including Mars (of which the Moon is a part), Defence and Science!"

Trump's statement, tweeted from Air Force One as he returned from Europe, appeared at odds with his administration's recent push to return humans to the lunar surface by 2024 "by any means necessary," five years sooner than the previous goal of 2028.

NASA plans to build a space outpost in lunar orbit that can relay astronauts to the lunar surface by 2024, part of a broader initiative to use the moon as a staging ground for eventual missions to Mars. NASA administrator Jim Bridenstine said Trump was only reaffirmingNASA's space plan.

"As @POTUS said, @NASA is using the Moon to send humans to Mars!,” he said on Friday in a tweet referring to the President of the United States. The accelerated timetable to land humans on the moon by 2024 ran into early trouble when the Trump administration asked a sceptical Congress in May to increase NASA's 2020 budget proposal by $1.6 billion as a “down payment” to accommodate the accelerated goal.

The accelerated timetable for going to the moon was a key recommendation in March of the new National Space Council led by Vice President Mike Pence.

Watch: The Moon is shrinking due to earthquakes, claims study

NASA's website on Friday said the Artemis program would send "the first woman and the next man to the Moon by 2024 and develop a sustainable human presence on the Moon by 2028." The program takes its name from the twin sister of Apollo and the goddess of the moon in Greek mythology.

NASA's Apollo program landed the first men on the moon 50 years ago on July 20.

The NASA website also provided details on the space agency's plans for making the moon a jumping off point for future missions to Mars and a place to test equipment and technology for other forays out into the solar system.

Trump's comments about the US manned space program reflect his desire to champion a bold new national objective as he mounts a re-election bid, while also seeking to counter the potential space weaponry capabilities of Russia and China.

Private companies are also joining the race to the moon.

Billionaire entrepreneur Jeff Bezos last month unveiled a mock-up of a lunar lander being built by his Blue Origin rocket company and touted his moon goals as part of a strategy aimed at capitalizing on the Trump administration’s push to establish a lunar outpost in just five years.