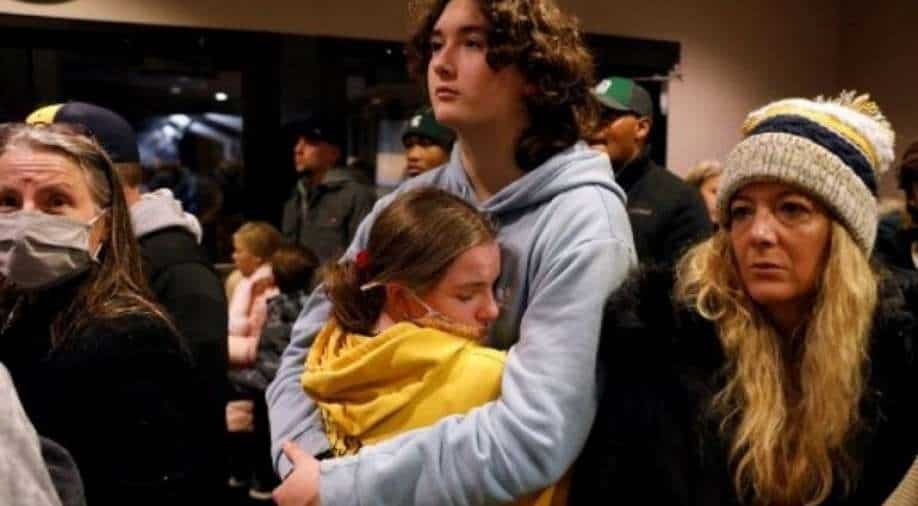 People hug during a vigil after a shooting at Oxford High School at Lake Pointe Community Church in Lake Orion, Michigan on November 30, 2021. A 15-year-old student opened fire at his Michigan high school on November 30, killing three teenagers and wounding eight other people before surrendering to police, authorities said, in what was the deadliest US school shooting so far this year. Photograph:( AFP )

The suspect was taken into custody and a semi-automatic handgun was seized, but there was no immediate explanation for what might have prompted the attack

A 15-year-old student opened fire at his Michigan high school on Tuesday, killing three teenagers and wounding eight other people before surrendering to police, authorities said, in what was the deadliest US school shooting so far this year.

Eight others, including one teacher, were wounded in the attack, which took place shortly after noon while classes were in session at Oxford High School, the Oakland County Sheriff's Office said.

Of the wounded, six were in stable condition and two were undergoing surgery.

The suspect was taken into custody and a semi-automatic handgun was seized, but there was no immediate explanation for what might have prompted the attack in Oxford, a small town about 40 miles (65 kilometres) north of Detroit.

"There was no resistance during the arrest and the suspect has asked for a lawyer and has not made any statements as to a motive," the sheriff's office said.

"We have three deceased victims right now, who are all believed to be students," he said.

"We have lots of upset parents," he said.

McCabe said police received more than 100 911 emergency calls shortly after noon, and that the shooter unleashed 15-20 shots over about five minutes.

The suspect was taken into custody within five minutes of the first 911 call, he said.

President Joe Biden was informed of the shooting during a visit to Minnesota.

"My heart goes out to the families enduring the unimaginable grief of losing a loved one," he said.

"That whole community has to be just in a state of shock right now."

McCabe said police had been in contact with the suspect's parents and had searched their home.

The suspect had been in class today and appeared to carry out the attack alone.

It was unclear if victims had been specifically targeted or were randomly shot, McCabe said.

"He's not talking to us at this time," he told reporters.

McCabe said police were combing the scene at the school, which has about 1,800 students and will want to interview anyone who might have information on the suspect.

"I think this is every parent's worst nightmare," Michigan Governor Gretchen Whitmer said at the same press briefing.

It was the deadliest school shooting so far this year, according to Everytown For Gun Safety, a group that keeps statistics of mass shootings and lobbies for gun control.

Before Tuesday's incident, there had been 138 shootings in schools across the United States in 2021, according to figures provided by Everytown.

In those incidents, 26 resulted in fatalities, though no more than two each time.

Asked about the plague of mass shootings in the country, Whitmer replied: "This is a uniquely American problem that we need to address."

The deadliest school shootings in US history were the April 2007 attack at Virginia Tech in Blacksburg, Virginia, which saw 33 killed, including the shooter, followed by the December 2012 attack on the Sandy Hook elementary school in Newtown, Connecticut, which left 28 dead, including 20 children and the shooter.

In February 2018, a man with an AR-15 assault rifle opened fire in his former high school in Parkland, Florida, killing 17, in the deadliest-ever high school shooting.

Shannon Watts, the founder of the group Moms Demand Action, called for more action to control firearms, saying there are 400 million guns owned by civilians across the country.

"If more guns made us safer, we'd be the safest nation in the world," Watts wrote on Twitter.