The 2016 US election: Labour unions and working class wages 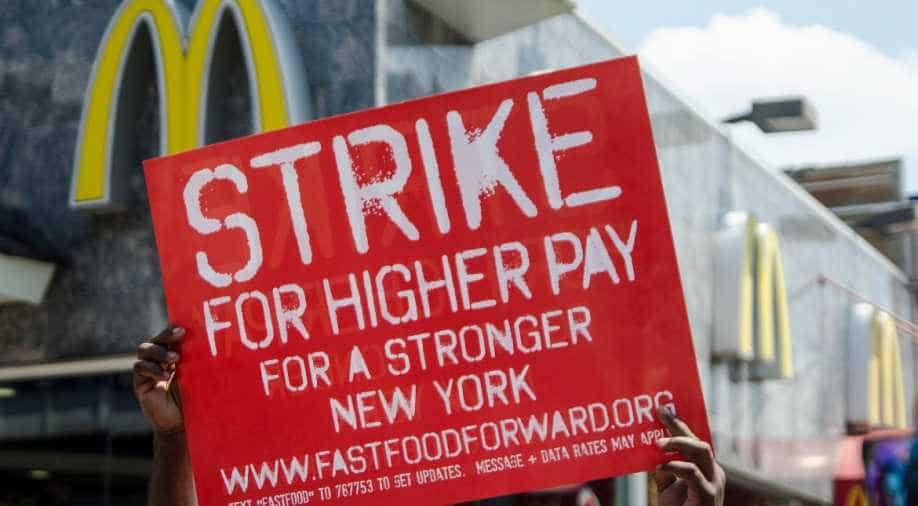 Both Republican and Democratic governments in the US have undermined labour unions and real wages for the last forty-years Photograph:(WION)
Follow Us

Donald Trump, the former television celebrity and current Republican Party candidate for the president, as well as Hillary Clinton, former secretary of state and current Democratic Party presidential nominee, have made the claim that, if elected, they will implement policies that will improve the lives of working Americans.  To see whether either candidate is on the right track to make lives better for average Americans, let’s take a look at the last half-century or so of unionisation and wages for average Americans, the two standard benchmarks of working class health.

Without unions, an individual worker is virtually powerless to negotiate with an employer. It is through a union, that a worker can gain both leverage and power. Workers, of course, go to work for a wage, the money is necessary to keep them and their families alive. The historical experience of the United States is that on average, strong unions increase wages and benefits whereas weak or no unions decrease them.

The decline of unions is roughly paralleled by the decline and stagnation of wages, bringing down the working class standard of living (Others)

As in many countries, employers and governments fought early efforts by workers to unionise but the Great Depression of 1929 radically changed the situation. As unemployment reached a third of the workforce and with a dramatic increase in poverty, labour struggles multiplied. Such labour activism was often supported by the presidency of Franklin Roosevelt and his brilliant and politically active wife, Eleanor. Unionisation grew through the Depression.

When the Great Depression ended up in World War II, the new extremely tight labor market favoured workers, as millions of men and women went off to war and millions of others got good work in war industries. Therefore, by the 1940s, the rate of unionisation peaked at 35 per cent of the labour force.  Beginning in the 1950s, continued attacks by employers, right-wing groups and sometimes less-friendly governments, led to a slow decline in unionisation. Attacks accelerated after the 1973-75 oil crisis and the unionisation rate fell to 20 per cent in 1983, 12 per cent in 2009, and 11 per cent in 2015. This union decline took place under both Republican and Democratic presidents. Today, unions are essentially a negligible economic and political force.

With strong unions and the buoyant post-war economy, wages and incomes grew steadily through the 1950s, 60s and 70s. (Others)

The decline of unions is roughly paralleled by the decline and stagnation of wages and the working class standard of living.  The labor market is stratified with many different wage levels, so while it’s true that incomes have increased for many working people, for the average worker and for those on the bottom, real wages have either declined or stagnated.

With strong unions and the buoyant post-war economy, wages and incomes grew steadily through the 1950s and 1960s. In terms of the value of  dollars in 2015, the real minimum wage peaked in 1968 at $ 10.85.  It has fallen or stagnated since and today is $7.25. According to the Pew Research Center, the 2014 average hourly wage of $22.41 was the same in real terms as the $4.03-an-hour rate of 1973.  No growth at all. The average household today has a net worth 14 per cent below that of 1984, according to the Russell Sage Foundation.  Meanwhile, from 1973 to 2013 labour productivity has increased by 73 per cent. Thus, the country got richer but average working families did not.

While labour productivity has increased over the decades and the country got richer, but average working families did not (Others)

So, the real question of the labour perspective under Trump or Clinton is whether they can change these long-run and deep-rooted tendencies.

Republicans are traditionally a pro-business anti-labour party, and Trump’s presidential platform is typically anti-labour. It endorses an expansion of “right-to-work” laws, which effectively prevent unions from organising.  Many Republicans would like to eliminate the legal minimum wage, and they oppose most regulatory statutes that protect working people. They argue that eliminating them and dropping wages will increase job opportunities, though the evidence from austerity programmes worldwide over the last 20 years provides no support for that.

The Democratic Platform calls for an elimination of “right to work” laws and therefore an extension of unionisation. It also calls for raising the minimum wage to $15 per hour, doubling the current figure.  They also support broader protections for working families and unions.

The problem is that both unions and real wages have been undermined for the last forty years under both Republican and Democratic governments.  There is no question that a Trump victory would be unfavourable for workers, but there is a question of whether a Clinton victory would help working families or not.  Only time will tell.

There is no question that a Trump victory would be unfavourable for workers, but there is a question of whether a Clinton victory would help working families or not.

Clinton and Trump differ on other issues that affect working families, but none more central than tax policy.  Municipalities, counties, state, and the federal government all require money to operate and, by and large, that money comes from taxes. Governments can tax businesses as well as individuals.  Individual taxes can take two forms: progressive and regressive. While the former can make those with higher incomes provide proportionately more taxes, the latter make those with lower incomes provide proportionately more.

The principal progressive tax in the United States is the Federal Income Tax. When implemented in 1913, the tax rate on the highest incomes was only 7 per cent. Governments soon discovered a basic principle of taxation, which is you can’t get money from people who does not have money. So, if you want to finance government, you have to tax the wealthy.  For that reason, with the Great Depression, Roosevelt brought the top tax rate up to 79 per cent in 1936, and then with World War II, to 94 per cent (it's expensive to fight wars). The top rate has been declining ever since: 77 per cent in 1964, 38.5 per cent in 1987, and 35 per cent from 2003 to 2012, though currently, under President Obama, it is 39.6 per cent.

Trump and the Republicans have all promised to cut taxes, claiming that it will help to restore growth and jobs. Though, as with wages, austerity programmes around the world over the last 40 years provide no evidence for this.  Cutting taxes on the rich make the rich richer and government poorer.  Trump has said he would cut the top individual rate to 25 per cent and the top corporate rate to 15 per cent while also eliminating the estate tax, a tax that disproportionately affects the wealthy.  The Democratic Party, on the other hand, has expressed support for the progressive income tax and the principle that the wealthy should pay a greater per cent of their income in taxes.

The Government has many expenses. So, when taxes on the wealthy are cut, a government must either cut spending which, incidentally, is the favoured position of the Republican programme, or raise regressive taxes, which incommensurably affect the poor.  Historically speaking, most spending cuts do disproportionately hurt the poor. This has for long been evident, for instance, when welfare was slashed in the 1980s, or in reduced spending in education, particularly, in Republicans controlled states. The wealthy have the option of sending children to private schools, an option closed to the poor.

Historically speaking, most spending cuts do disproportionately hurt the poor.

Here are many other policy issues – health care, education, retirement benefits, social security, climate change – that affect working people, but unions, wages, and taxes are the most immediate and direct.  That said, nobody can predict the future.  Future growth rates, technological change, climate change, and the political activities of the working class itself are at least as important, if not more, as government policy.  Furthermore, once in office, candidates change as the real world impinges. A candidate may say one thing, but once in power, may do another.  Furthermore, and as of this writing, Trump has only a miniscule chance of winning the election after insulting African-Americans, Latinos, immigrants, Muslims, the disabled, women, and many leaders in his own party.