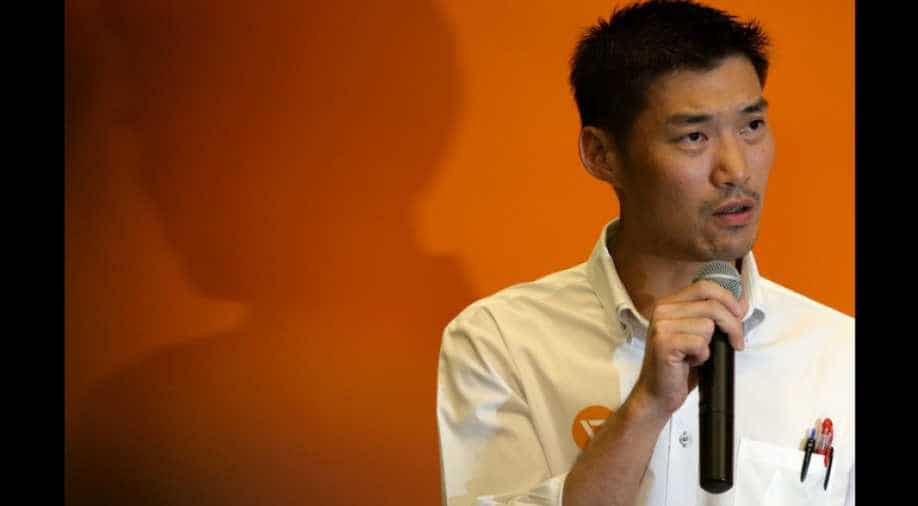 Thanathorn Juangroongruangkit, the founder of Thailand's Future Forward Party, looks on during the launch of the party. Photograph:( Reuters )

A scion of Thailand's biggest auto parts group launched a new political party in Bangkok on Thursday as an alternative to established parties, promising to bridge a festering political divide in the country.

Thanathorn Juangroongruangkit, 39, who serves as the executive vice president and director of the Thai Summit Group, an autoparts maker, launched the 'Future Forward Party' in Bangkok's up-and-coming Chinatown neighborhood.

Thanathorn said he hoped to appeal to younger voters and disenfranchised citizens.

"Give democracy a chance," he said in English at the launch.

"We don't need governance through guns," he added in Thai, referring to the ruling military, which took power in 2014.

The launch comes two weeks after Thailand's Election Commission opened registration for new political parties, one of the first signs of a halting return to democracy.

Thailand has been under military rule since a 2014 coup toppled an elected government.

Since the coup, the generals running Thailand have banned political activity. They have also repeatedly delayed a general election with the latest date pinned on February 2019.

The country has been largely divided since a 2006 coup against then Prime Minister Thaksin Shinawatra, a businessman turned politician who gained a loyal following among rural voters but made many enemies among the military-royalist elite.

Following a period of democracy, the military again intervened in 2014 to topple a civilian government led by Thaksin's sister, Yingluck Shinawatra.

Critics of the junta say it has failed to deliver on its promises and that political divisions remain steadfast.

Growing impatience with the junta has been manifest in protests calling for a quick return to democracy.

The demonstrations come as Prime Minister Prayuth Chan-ocha, 63, who as army chief led the 2014 coup, appears to be undertaking his own campaign to stay on as prime minister.

Thanathorn, whose family also has a major stake in the Matichon Pcl, which publishes newspapers, resigned from Matichon's' board on Wednesday but remains on the board of Thai Summit, a privately held company.

Thanatorn has been described by some as the "next Thaksin", but on Thursday said he did not side with any existing group.

"We have our own stance," he said.

He did not list his party's policies because formal political campaigning is still banned by the junta, but said he hopes to attract "ordinary people" to support the party.

"People who are not famous ... but who want to shape our country's future together," he said.

Thanathorn introduced other party co-founders on Thursday, including a filmmaker and a number of activists involved in LGBT and environmental causes, among other issues.

But some say the party might find it difficult to appeal to grassroots voters.

"Will they, academics and NGOs ... be able to connect with grassroots people, which is a large part of the electoral base?," asked one Twitter user.