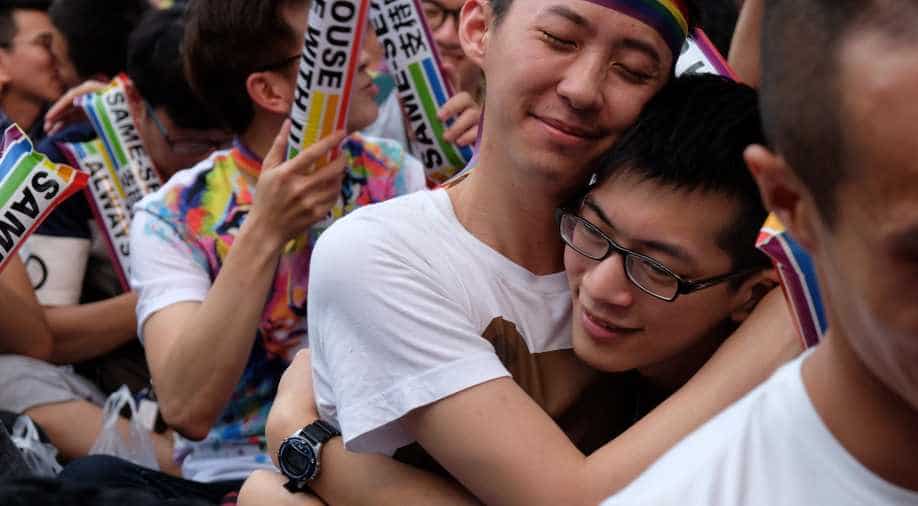 Hundreds of gay rights supporters gathered despite heavy rain near Taipei's parliament as a mammoth legislative debate got underway over an issue that has bitterly divided the island.

Hundreds of gay rights supporters gathered despite heavy rain near Taipei's parliament as a mammoth legislative debate got underway over an issue that has bitterly divided the island.

Parliament is up against a ticking clock.

Taiwan's top court has ruled that not allowing same-sex couples to marry violates the constitution. Judges gave the government until May 24 this year to make the changes or see marriage equality enacted automatically.

But they gave no guidance on how to do that.

With that deadline fast approaching, three bills have been tabled for Friday's vote -- which also happens to be the International Day Against Homophobia, Transphobia and Biphobia.

The most progressive is the government's bill, the only one to use the word "marriage" and to offer limited adoption rights.

It is backed -- begrudgingly -- by gay rights groups who see it as the closest thing to full equality with heterosexual couples, despite its limitations.

Opponents have tabled two other versions which avoid the word marriage, offering something closer to same-sex unions with no adoption rights.

Conservative and religious groups have been buoyed by a series of  referendum wins in November, in which voters comprehensively rejected defining marriage as anything other than a union between a man and a woman.

In a Facebook post President Tsai Ing-wen said she recognised the issue had divided "families, generations and even inside religious groups".

But she said the government's bill was the only one that respects both the court judgement and the referendum.

"Today, we have a chance to make history and show the world that progressive values can take root in an East Asian society," she added in a tweet.

But there is no guarantee her own lawmakers will vote for the more progressive bill, especially as many fear being punished by conservative voters at the ballot box in January.

One of the rival bills was proposed by a DPP lawmaker. And a last-minute amended version of the government's bill has been tabled by fellow lawmakers in the party, dropping the phrase "same-sex marriage".

However, it still lets same-sex couples join an "exclusive permanent union" and apply for a "marriage registration" with government agencies.

Taiwan's LGBT community has been left in limbo the last two years, with many couples planning weddings ahead of the May 24th deadline but unsure of what marriage equality will look like.

"The world is watching to see if Taiwan's parliament will write a new page in gender equality or deal another blow to Taiwan's hard-fought democracy, human rights and the rule of law," said Jennifer Lu, a spokeswoman for Marriage Equality Coalition Taiwan.

"For the gay communities what matters the most is whether we can legally get married on May 24 and be listed as the spouse in ID cards, to be treated and respected as the 'spouse' in the whole legal system ... and whether same-sex families can obtain legal parental rights for their children."

Cindy Su was one of thousands of gay marriage supporters gathered outside parliament on Friday ahead of the debate.

"We are just a group of people who want to live well on this land and who love each other," she told the crowd.

But opponents warn that "forcefully" passing a gay marriage law will intensify tensions.

"The cabinet's bill ignores the referendum results and that is unacceptable," said Lai Shyh-bao of the opposition Kuomintang party, who proposed one of the bills backed by conservatives.