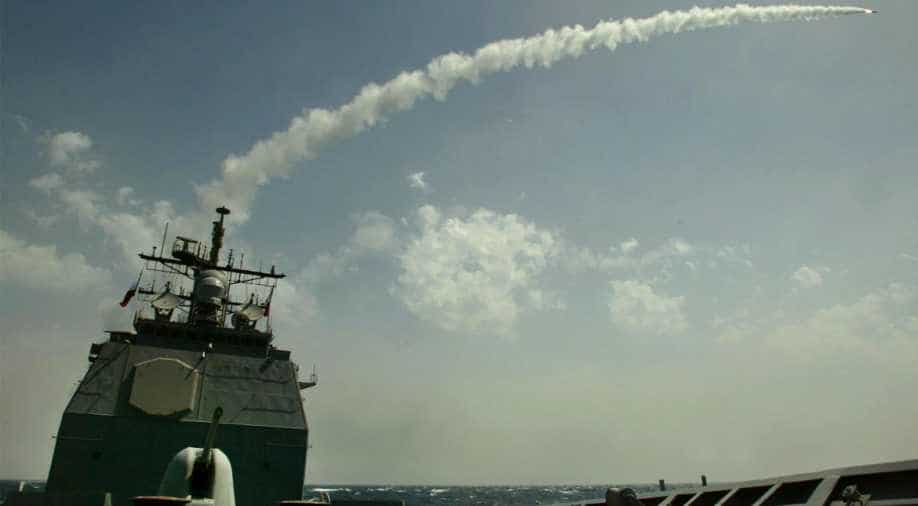 The missile was fired during a drill from a 500-tonne missile ship docked at a naval base in the southern city of Tsoying. (Representative image) Photograph:( Getty )

Follow Us
A Taiwanese warship mistakenly launched a supersonic "aircraft carrier killer" missile towards China today, hitting a fishing boat and killing one person, the navy said, as ties between the island and its once-bitter rival deteriorate.

The Hsiung-feng III (Brave Wind) missile flew about 75 kilometres (45 miles) before hitting the trawler in waters off Penghu, a Taiwanese-administered island group in the Taiwan Strait.

The skipper on the Taiwanese 60-tonne trawler was killed and three other crew on board, including a Vietnamese and a Filipino, were injured.

"An initial investigation showed that the incident has caused the death of the skipper," Taiwan's defence ministry spokesman Chen Chung-chi told reporters, adding, "We apologise to the family of the skipper and would like to convey our condolences to them".

The missile was fired during a drill at around 8:10am (0010 GMT) from a 500-tonne missile ship, docked at a naval base in the southern city of Tsoying, in the direction of China.

The navy said the missile went through the trawler, but did not explode, nor did it sink the fishing vessel.

Television images showed the upper part of the cabin, where the skipper was when it was hit, scorched and destroyed.

The navy said it was not immediately clear how the missile, which has a range of 300 kilometres, had come to be launched, but suggested it could have been due to human error.

"Our initial investigation found that the operation was not done in accordance with normal procedure," Vice Admiral Mei Chia-shu told reporters, adding that an investigation was under way.

Helicopters and navy ships were sent to search for the missile, Mei said, adding that the military had reported the gaffe to the island's top security body, the National Security Conference.

Taiwan's Mainland Affairs Council, which handles China policy, said it had notified Beijing of the incident through a quasi-official body.

Official communications between the council and its Chinese counterpart have effectively been frozen by Beijing over Taiwan's new government refusing to recognise the "one China" concept.

The tenet, agreed by Beijing and Taiwan's then-ruling Nationalists in 1992, established that there is only one China, but with each side reserving the right to interpret the concept as they see fit.

Analysts said Friday's incident drew attention to how damaging the freeze in communications could prove.

"This event highlights the importance of communications between the two sides... In order to reduce the possibility of any misjudgement," professor Alexander Huang from Tamkang University told AFP, adding, "Otherwise, should we wait until a big event happens?"

Ties between Taipei and Beijing have deteriorated noticeably since President Tsai Ing-wen of the China-sceptic Democratic Progressive Party (DPP) was elected in January.

Beijing is deeply mistrustful of Tsai, whose DPP replaced the China-friendly Kuomintang (KMT) party in government, and has warned her against any attempt at a breakaway.

China still insists that self-ruling Taiwan is part of its territory, even though the two sides split in 1949 after a civil war, and has not ruled out using force to bring about reunification.

According to Taiwan's defence ministry, there are 1,500 Chinese missiles aimed at the island.

China launched some of the missiles into waters off Taiwan in 1995 and 1996 in an attempt to deter voters in the island's first democratic presidential elections.