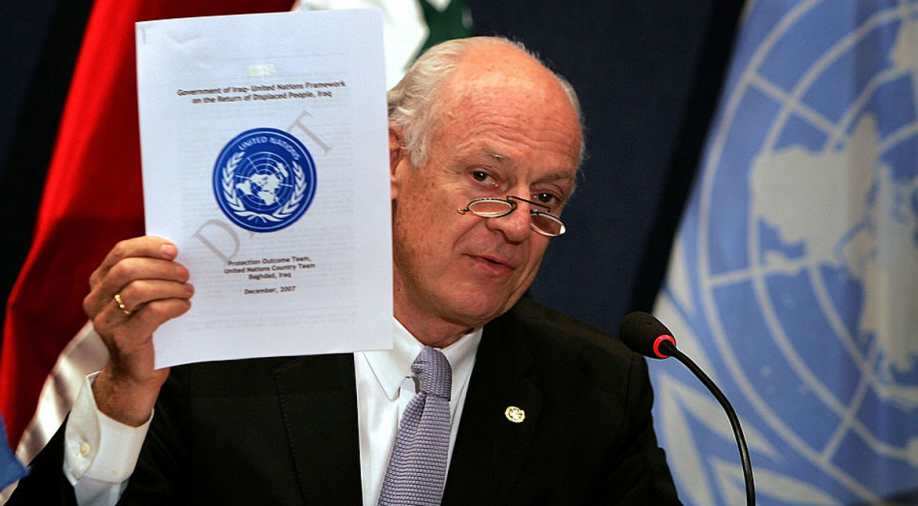 De Mistura warned that if the opposition failed to agree on the composition of the delegation by February 8, he will select the representatives from the various groups who will come to the peace table. Photograph:( Getty )

UN-led peace talks on Syria have been postponed until February 20 to allow a ceasefire to take hold and to give the opposition time to present a united front, the UN envoy said Tuesday.

The talks in Geneva had been scheduled to begin on February 8 but Russian Foreign Minister Sergei Lavrov last week announced they would be delayed, without providing reasons.

UN envoy Staffan de Mistura told a closed meeting of the Security Council that the postponement would help bolster preparations for the talks aimed at ending the nearly six-year war.

"We want to give a chance both to the government to become seriously engaged in discussions and the opposition (...) to actually be able to be given a chance to come with one unified opposition," De Mistura told reporters after the meeting.

Russia, Iran and Turkey last week led talks in the Kazakh capital of Astana on shoring up a ceasefire in Syria, where more than 310,000 people have died.

"If the ceasefire becomes as solid as we hope that will only help the Syria talks," said the envoy.

The Syrian opposition has been divided over representation to the talks.

De Mistura warned that if the opposition failed to agree on the composition of the delegation by February 8, he will select the representatives from the various groups who will come to the peace table.

"If by the 8th of February, the opposition will not be ready to come up with a unified group, I will have to ....actually select the delegation in order to make sure that it can be as inclusive as possible," he said.The council heard a report from De Mistura amid concerns that the Astana discussions could open up a new track of negotiations.

During the Astana talks, Russia, Syria`s main ally, presented opposition rebels with a draft constitution that was immediately rejected by the groups.

The unilateral move by Russia raised concern in Western capitals.

"We have been concerned that the Geneva talks have been delayed and we would be concerned if there were any watering down of the basis of those talks," British Ambassador Matthew Rycroft told reporters.

"It`s very important that there is confirmation that the UN will lead the next round of talks," said Swedish Ambassador Olof Skoog, this month`s council president.

"The UN has to be front and center in the political process," said French Ambassador Francois Delattre.

He cited the need to respect the Geneva communique agreed with Russia that calls for a transition in Syria.

"We start with a transition, then the constitution, and then the elections," said Delattre. "I think if we can all stay on this line, then we can move."

Previous UN-led talks have broken down over disagreements on ensuring a transition in Damascus that would lead to President Bashar al-Assad`s exit from power.

Western powers have for weeks questioned the purpose of the Astana talks and raised concern that they could sideline the Geneva talks.

Turkey, which backs rebel forces, has for the first time conceded that a peace deal that excludes Assad from power might not be possible.

The new date was announced after US Ambassador Nikki Haley meet with De Mistura on Monday to discuss the way forward in Syria.