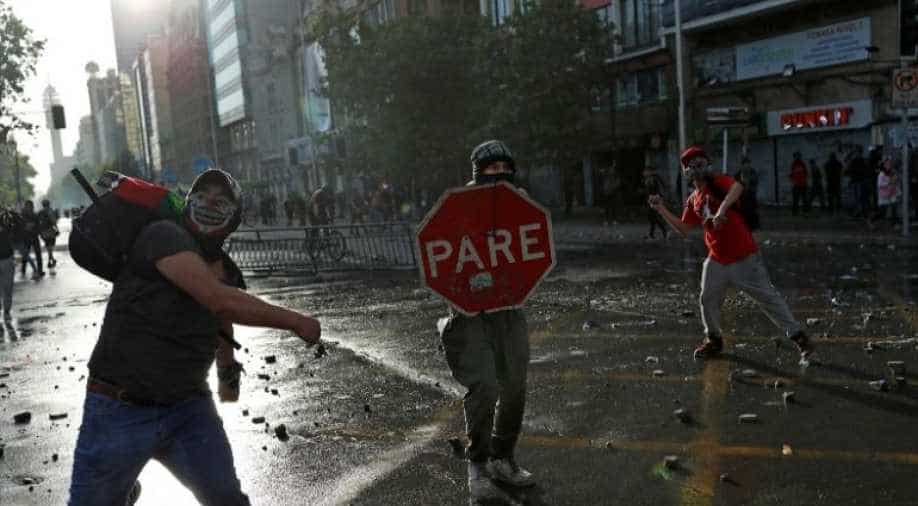 From the streets of Santiago and Quito to the ballot boxes of Buenos Aires, many South Americans have strongly rejected in recent weeks their leaders' free-market agendas, amid outcry that they are fueling inequality across the region.

With economic growth slowing sharply, job security fraying and holes in social safety nets widening, a wave of protest has arisen, spanning millions of people across the continent.

The end of the 'pink tide' of leftist leaders that swept Latin America in the 2000s gave way in recent years to a series of more broadly conservative governments.

But while each country has its own issues, there has been a common backlash against the "market-friendly" policies pursued by some of those governments, such as the privatising of state assets, reduction of public subsidies, and exposure of more aspects of society to market forces.

In Chile, which introduced market reforms long before the rest of the region and is seen by many as a poster child of neoliberalism, some 1 million people marched on Friday to protest the conservative economic agenda of billionaire President Sebastian Pinera, the largest protest since the country's return to democracy in 1990.

That followed a week of riots in which at least 18 people were killed. The unrest began after the government raised the price of metro fares, but reflected long-simmering anger at its failure to alter Chile's economic course despite growing inequality.

"There are two Chiles here. The Chile of people with money, and the Chile of the poor," said Nathaly Melendez, 28, a manicurist in Santiago. "If you don't have money, you have to wait in long lines for healthcare, education is terrible, students are all in debt."

The protests in Chile came hot on the heels of violent demonstrations in Ecuador sparked by a proposed cut to decades-old fuel subsidies, which forced the government to temporarily relocate the capital to Guayaquil.

And in perhaps the most emphatic rejection of austerity and business-friendly reforms, Argentine voters on Sunday removed conservative President Mauricio Macri in favour of Peronist Alberto Fernandez - a landslide backing for a decidedly more protectionist agenda.

Branko Milanovic, visiting professor at The City University of New York and an expert on inequality, said the uneven effects of globalisation had sown discontent in Latin America.

Globalisation in recent decades brought a surge in low-cost products from emerging countries like China and expanded the export markets for Latin America's commodities, helping to fuel economic growth, but many across the region feel the rewards have accrued mostly to the wealthy.

By some measures, Chile is one of the most unequal countries in Latin America, though it also has the highest average income. According to Milanovic, the combined wealth of Chilean billionaires in 2015 was equal to a quarter of gross domestic product - the highest in the world, excluding tax havens like Cyprus, and around double the level of Mexico and Peru.

"If there is no social justice and minimum of social cohesion, the effects of growth will dissolve in grief, demonstrations, and yes, in the shooting of people," Milanovic wrote.

Leftist leaders have been galvanized by the backlash. Evo Morales, Bolivia's socialist leader now facing widespread protests after a disputed election win this month, has looked to rally his supporters with warnings about the return of neoliberalism should he lose power.

Creomar De Souza, the founder of Brasilia-based consultancy Dharma Political Risk And Strategy, said the longer-term policy impact of the upheavals was not yet clear.

"But in some of these countries, Argentina and maybe Bolivia, the economy will take a more heterodox turn, with a greater role for the state," De Souza said. "Pinera will try to endorse some social reforms in Chile, but the legitimacy of that generation of politicians is under threat."

The unrest coincides with a slide in Latin American economic growth in the wake of a long commodities-driven boom. The International Monetary Fund this month slashed its growth forecasts for the region this year to a dismal 0.2 per cent, the second-lowest rate in the world, behind the Middle East and North Africa's 0.1 per cent.

While many people globally feel poorer as the world economy slows, in Latin America it is actually true, according to World Bank figures.

The Bank uses a variety of measures to track GDP per capita, depending on exchange rate fluctuations, and most of them suggest it is lower in the region today than it was five years ago.

The process is not helped by the government's efforts in countries like Argentina, Chile and Brazil to reduce budget deficits.

"It's totally different from Macri's supposed model, which is obviously not a model at all but rather a big-business trick typical of people belonging to his class," she said.

Opposition to Chile's direction may be of particular interest for Brazil watchers, given that Economy Minister Paulo Guedes is a devotee of its economic model.

An orthodox University of Chicago-trained economist, Guedes failed in his attempt to introduce a pension system in Brazil based on the Chilean model of private savings accounts, though his reform, passed this month, will save the public purse $200 billion over the next decade by raising the minimum retirement age and increasing workers' contributions.

The remainder of his reform agenda, which includes labour market deregulation and ramping up privatisation, may face increased political resistance.

Memories linger of Brazil's brutal recession in 2015-16 as well as last year's truckers' strike over diesel price hikes that brought the country to a standstill. So far, there is no sign of people taking to the streets again in Brazil, but the political mood appears to be turning against Guedes' agenda.

The inequality "keeps millions of Brazilians from being consumers and demands heavy social spending on unemployed, discouraged and underutilised workers," he said.