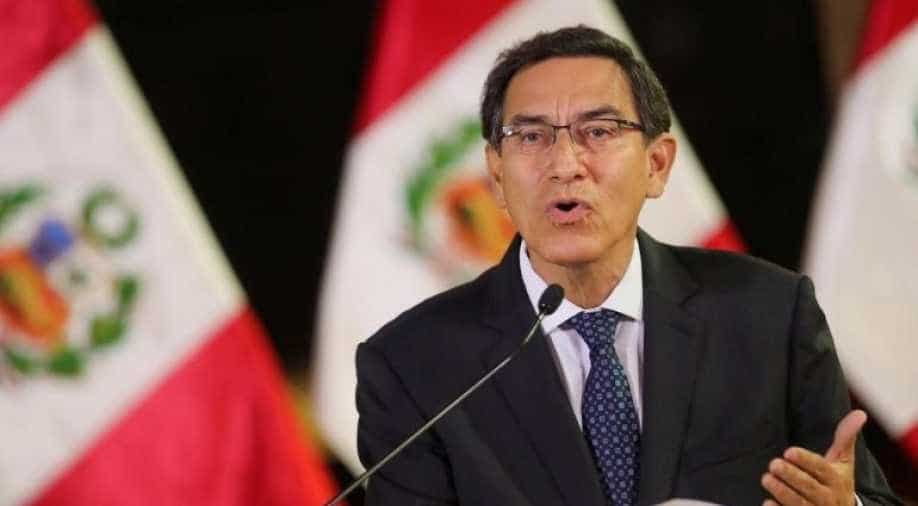 After Vizcarra appears in Congress next Friday to defend himself, the plenary will debate and vote

Peru's Congress on Friday voted to open impeachment proceedings against President Martin Vizcarra for "moral incapacity" over accusations he tried to obstruct a corruption probe against government officials.

The motion was approved by 65 votes, with 36 against and 24 abstentions. Fifty-two votes were required to open the proceedings early next week.

To remove the president, who lacks a party, 87 votes are required. After Vizcarra appears in Congress next Friday to defend himself, the plenary will debate and vote.

Six out of nine parties — representing 95 of the 130 seats in Congress — have backed the motion.

"I'm not going to quit. I do not run," Vizcarra said in a televised address ahead of the vote in which he denied any wrongdoing.

Also read: At least 13 killed in stampede as club goers flee at sight of Peru police

"We are facing a plot against democracy," he said, adding that he had nothing to hide but that lawmakers should act "with caution, with responsibility, and to take the decision they deem necessary."

Vizcarra, in power since 2018, came under fire after leaked audio recordings in which he is heard telling aides to hide details of his office's controversial hiring of a popular singer as a paid cultural advisor.

In the event of impeachment, legislative speaker Manuel Merino will act as interim leader until the current presidential term ends in July 2021.

Vizcarra has won popular support for an anti-corruption crusade that has put him at loggerheads with opponents in Congress, including over a reform banning convicted criminals from standing for election.

The impeachment motion is reminiscent of the one that forced the resignation of his predecessor Pedro Pablo Kuczynski in 2018, after he became embroiled in the Odebrecht bribes scandal.

It comes as the country is in the throes of an economic crisis triggered by the coronavirus pandemic, which has seen Peru's second-quarter GDP slashed by 30 per cent.

"The dismissal is very dangerous in these circumstances," political analyst Fernando Rospigliosi told AFP, warning against a change of government in the middle of a crisis and with only seven months to go until a general election.

Prime Minister Walter Martos on Friday denounced the move against the president.

"What Congress is doing right now is to stage a coup d'etat, because it is making an arbitrary interpretation of the Constitution," Martos, a retired army general and number two in the government, told radio RPP.

The case exploded in May when the press discovered that, at the height of the pandemic, the Ministry of Culture had hired singer Richard Cisneros, a little-known local artist who boasted in the media that he had been an advisor to the government, as a speaker and entertainer.

Parliament opened an investigation into the alleged irregular contracts for which Cisneros received $10,000.