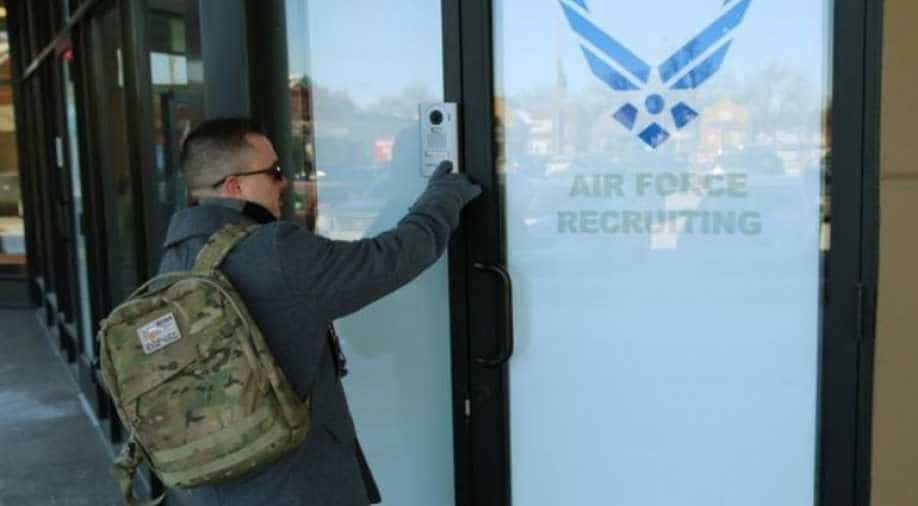 Nicholas Bade, 37, who is among the transgender Americans who this month can enlist openly in the US military for the first time after courts blocked President Donald Trump's effort to re-establish a ban on transgender service members. Photograph:( Reuters )

The policy will take effect on April 12 and will bar most transgender individuals from serving if they require hormone treatments or transition surgery.

The US Defense Department signed a memo on Tuesday that would enforce limitations on transgender people serving in the military, a policy that has been the subject of court challenges.

The policy will take effect on April 12 and will bar most transgender individuals from serving if they require hormone treatments or transition surgery.

The memo, signed by David Norquist, currently the No. 2 official at the Pentagon, will allow service secretaries to issue waivers on a case-by-case basis.

President Donald Trump announced in July 2017 a ban on transgender people serving in the military. He later accepted Pentagon recommendations to limit the ban to individuals with a history of gender dysphoria, defined as "those who may require substantial medical treatment," and allowing some exceptions.

A series of court challenges had put the policy on hold. But the US Supreme Court in January lifted lower-court rulings that had blocked the policy, allowing it to go into effect.

Trump`s decision to bar many transgender troops reversed a landmark 2016 policy of his Democratic predecessor, Barack Obama, to let transgender people for the first time serve openly in the armed forces and receive medical care to transition genders.

Trump cited military focus and medical costs for rolling back the policy.

Advocates for transgender people criticised the Trump policy. "The Trump administration is determined to bring back `don’t ask, don`t tell,` a policy that forced service members to choose between serving their country and telling the truth about who they were," Aaron Belkin, director of the Palm Center LGBT-rights think tank, said in a statement.