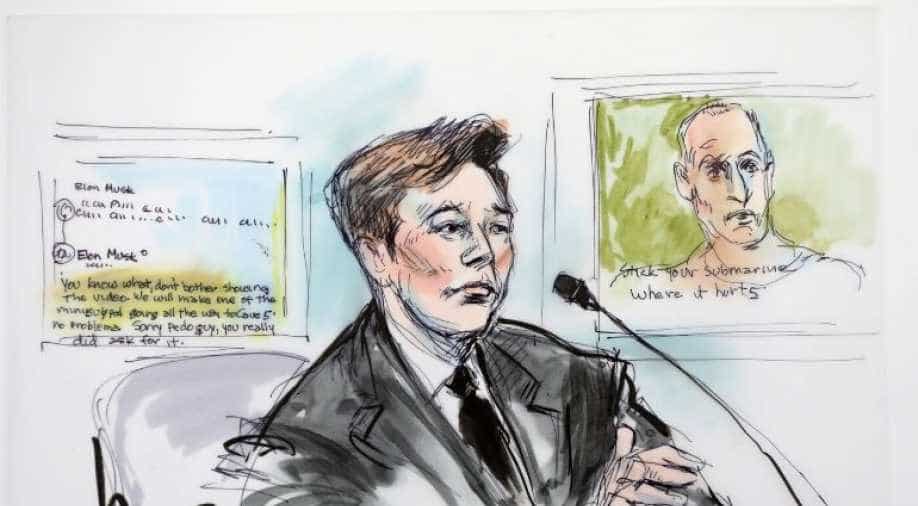 High-tech entrepreneur Elon Musk testified at his defamation trial on Tuesday that his "pedo guy" Twitter message at the centre of the case was not meant to be taken literally and was sent in response to an "unprovoked" insult he received from the man now suing him.

Musk, 48, the billionaire chief executive of electric carmaker Tesla Inc and founder of the rocket company SpaceX, also apologized to the plaintiff from the witness stand in the packed Los Angeles courtroom.

Musk was the first witness called to testify in the lawsuit brought against him by British cave diver who gained fame for his lead role in the rescue of 12 boys and their soccer coach from a flooded cave in Thailand last year.

The diver, Vernon Unsworth, has accused Musk of falsely labelling him a paedophile on Twitter and is seeking unspecified punitive and other money damages.

The case stems from an offer Musk made to furnish a mini-submarine to assist in the Tham Luang Nang Non cave rescue in July 2018.

Unsworth told CNN on July 13, 2018, three days after the rescue was successfully completed, that Musk's offer was a "PR stunt" and that Musk should "stick his submarine where it hurts."

Two days later, Musk lashed out at Unsworth in a series of tweets, including one which called the cave diver a "pedo guy." Musk later apologized for the comment, saying the term was a common insult in South Africa where he grew up.

Unsworth has called the slur a lie that harmed his reputation.

Under questioning from Unsworth's lawyer, after five women and three men were seated as jurors in the case, Musk insisted the tweet in question was his reaction to "an unprovoked attack on what was a good-natured attempt to help the kids.”

"It was wrong and insulting, and so I insulted him back," Musk said of his exchange with Unsworth, adding, "I thought he was just some random creepy guy” and was "unrelated to the rescue."

Pressed further by the plaintiff's attorney Lin Wood, Musk testified he did not mean for his tweet about Unsworth to be taken literally.

"I assume he did not mean to sodomise me with a submarine ... Just as I didn't literally mean he was a paedophile," he said.

"I apologised in a tweet and again in the (pretrial) deposition, and I'll say it again, I apologise to Mr Unsworth," Musk said looking directly at the plaintiff, who sat stone-faced through Musk's testimony.

Musk was expected to return to the witness stand on Wednesday for more questioning by his own lawyers.

US District Judge Stephen Wilson has explained the case hinges on whether a reasonable person would take Musk's Twitter statement to mean that he was calling Unsworth a paedophile.

To win the defamation case, Unsworth needs to show that Musk was negligent in publishing a falsehood that clearly identified the plaintiff and caused him harm. "Actual malice" on Musk's part does not need to be proven because the judge has deemed Unsworth a private individual rather than a public figure.

Although the case does not involve Tesla, Musk's Twitter habits have long been under close scrutiny, with investors and regulators expressing concerns about his tweets.

With 29.8 million followers, Musk's Twitter account is a major source of publicity for his Palo Alto, California-based electric car company, which does not advertise.

Wood, representing Unsworth, tried to establish that Musk knew he had a high degree of influence with his Twitter followers and the public, and that the veracity of what he said thus carried significant weight.

“People say a lot of things on Twitter that aren’t true,” Musk said.

Musk also acknowledged under oath that he was duped out of $52,000 by a man posing as a private detective to dig up information about Unsworth after it became clear a defamation suit was in the works. The investigator proved to be a con artist, Musk testified.

In an opening statement, lawyer Taylor Wilson, another member of Unsworth's legal team, said the tweet in question was more than a slip-up, and Musk had no business branding Unsworth a predator "in what should have been one of the proudest moments of his life."

Musk lawyer Alex Spiro countered that Unsworth did not act after the tweet like a man who suffered because of it.

"The plaintiff is saying he has been horribly damaged, and deserves money," Spiro said. "He doesn't."