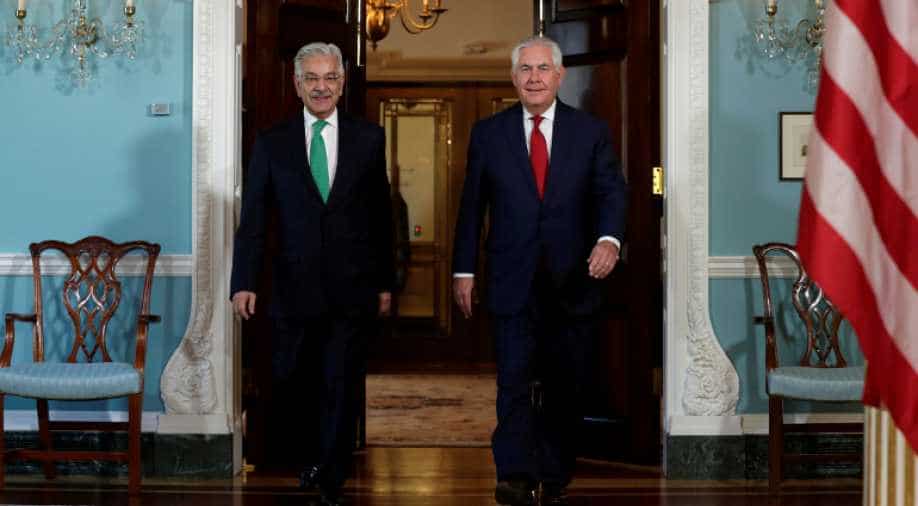 There is no mention of India in playing any part in bringing peace in the region. ||President Trump had recently announced a new South Asia policy which severely condemned Pakistan.

As the Trump administration tightens its grip over events in Afganistan, Pakistan has indicated it is ready to restart the quadrilateral peace process for ending the Afghan war, a report said.

Pakistan's Dawn newspaper said today foreign minister Khawaja Asif has told VOA Urdu in Washington that he intends to bring the Taliban and the Afghan government to the negotiating table through the quadrilateral peace process.

Afghanistan, the United States, China and Pakistan are members of the group.

The Quadrilateral Cooperation Group hopes to meet in Muscat, Oman next Monday.

There is no mention of India in playing any part in bringing peace in the region.

President Trump had recently announced a new South Asia policy which severely condemned Pakistan. Trump called for more troop deployment in Afghanistan and spoke about India's role in the country.

In his speech, Trump attacked Pakistan and accused the country of offering a safe haven to "agents of chaos".

Pakistan foreign minister Asif was in the US last week to assure Trump government officials about his country's intent in Afganistan.

In fact, US defense secretary James Mattis had warned Pakistan to address the problem of terrorism but if it failed then the "US president would be prepared to take whatever steps necessary".

The quadrilateral group has met four times in the past but has achieved little, it last met in May last year in Rawalpindi.

Pakistan has tried to use its influence with China in order to coax the Afganistan government and the Taliban to come to the table and use it as a leverage against influence of India in the region.

However, Taliban's internal differences and its relationship with the Pakistan government has been on the boil lately which has ensured no real results have been achieved.

As the US sends more troops in the region and pressures Pakistan to do more, the members within the Quadrilateral Cooperation Group are now hard-pressed to show concrete results.