Pakistan suspends talks with US in protest against Trump's fiery comment 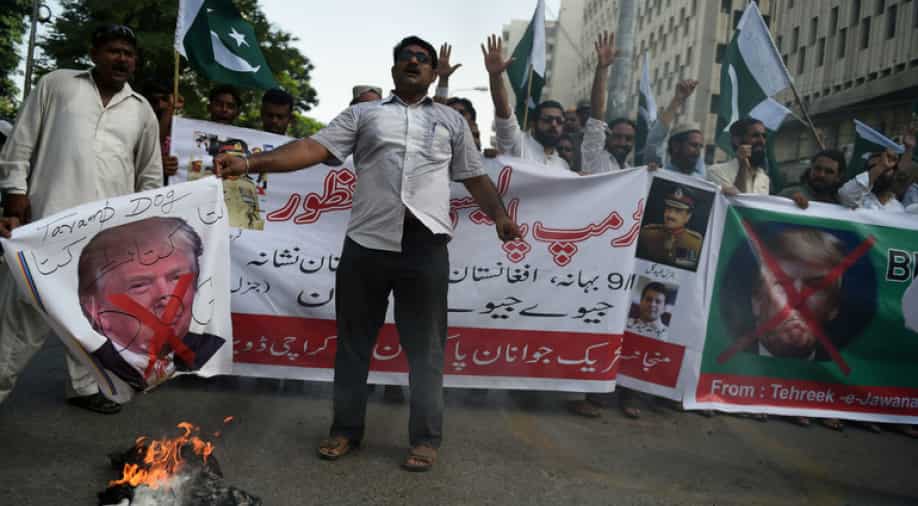 Pakistani demonstrators burn a poster of US President Donald Trump during a protest in Karachi Photograph:( AFP )

The talks were suspended to express disapproval of US President Trump's comments criticising the nation, media reports said.

Asif informed the Senate on Monday that the South Asian nation has taken President Trump's remarks in serious light.

Trump has announced a new South Asia policy which has condemned Pakistan.

Last week, during his very first speech as the commander-in-chief, Trump called for more troop deployment in Afghanistan and spoke about India's role in the country.

On the other hand, he attacked Pakistan and accused the country of offering a safe haven to "agents of chaos".

This led to a series of protests and as a consequence, Pakistan postponed the visit by a US acting assistant secretary of State.

According to the previous schedule, US Secretary of State for South and Central Asia Alice Wells was supposed to arrive in Pakistan on Tuesday, while Asif was to travel to the US last week.

In context to Trump's South Asia policy, Asif does not foresee a military role for India in Afghanistan. The minister said that it was rather a role of economic development.

The minister said that India would not be allowed to use Afghan soil to destabilise Pakistan. This particular remark took most committee members by surprise as they were under the impression that India was already using Afghanistan to plan subversive activities in Pakistan. The members sought information on the terror events in Pakistan that were sponsored in India, with emphasis on Indian intelligence agent Kulbhushan Jadhav case.

Members wanted to understand that what mechanism would be put in place to check if Indian presence was not being abused to instigate terrorism in Pakistan.

They were also keen on understanding why there were an unusually high number of Indian consulates in Afghanistan--more than those it had in the US.

Additionally, the members demanded the government to share a fact-sheet on US assistance received after 9/11, the reimbursed amount of coalition support fund (CSF) and the financial loss incurred by the country as a frontline state against the war on terror.

According to media reports, Foreign Secretary Teh­mina Janjua told the Senate that a meeting of Pakistan`s representatives had been convened from September 5 to September 7 to draw a strategy over the new US policy on South Asia.

It was decided that the Senate will have another meeting on Tuesday to standardise the policy guidelines, keeping in mind the emerging realities and the role of the US, curated by a six-member committee of the house.

The policy guidelines are likely to be passed on Wednesday.

Meanwhile, Pakistan's newly-appointed Prime Minister Shahid Khaqan Abbasi is to make a trip to the US in the second half of September.

The visit will be his first visit to the US as Prime Minister and he is expected to meet American officials on the sidelines of the UN General Assembly session in New York.