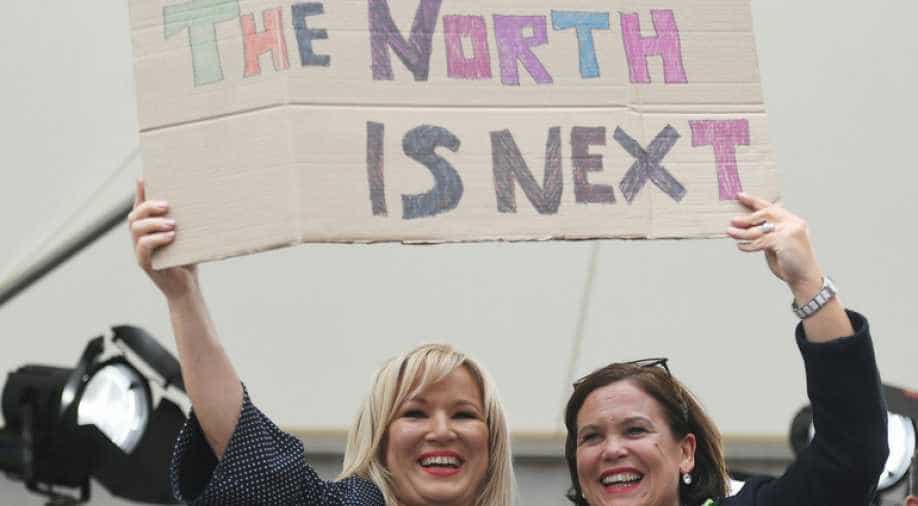 Activists in Ireland holds up a placard as they celebrate the result of yesterday's referendum on liberalizing abortion law, in Dublin, Ireland Photograph:( Reuters )

Voters in Ireland on Friday backed the removal of a constitutional abortion ban by two-to-one.

That leaves British-ruled Northern Ireland as the only part of the British Isles with a restrictive abortion regime, and May on Sunday faced calls from within her cabinet and the opposition to scrap Northern Ireland's strict rules.

A spokeswoman for May said on Sunday changing the rules should only be undertaken by a government in Northern Ireland.

The province, divided between unionists who favour continued British rule and nationalists who want to unify with Ireland, has had no devolved regional government since January last year after a power-sharing agreement collapsed between the two communities' main parties.

Activists gathered outside Belfast City Hall carrying placards emblazoned with messages such as "I am not a vessel" and "Mind Your Own Uterus". They said it was May's responsibility to act.

Abortion is permitted in Northern Ireland only if a woman’s life is at risk or there is a risk to her mental or physical health that is long-term or permanent. It is not permitted in cases of rape, incest or fatal foetal abnormality.

Both Northern Ireland's mainly unionist Protestants and its mainly nationalist Catholics tend to be more socially conservative than elsewhere in Ireland or Britain.

It is estimated that around three women travel from Northern Ireland to England for an abortion every day, while others risk prosecution by self-medicating with abortion pills.

"It is awfully unfair that people here should not be able to get an abortion," said schoolgirl George Poots, at the rally with her mother and brother. "At present they have to worry about travelling to England and I also think of the women who cannot travel."

Anti-abortion group Precious Life said Ireland's vote would spur it to "up the battle to protect Northern Ireland's unborn children". "Northern Ireland is now the beacon of hope to the pro-life movement around the world," leader Bernie Smyth said.