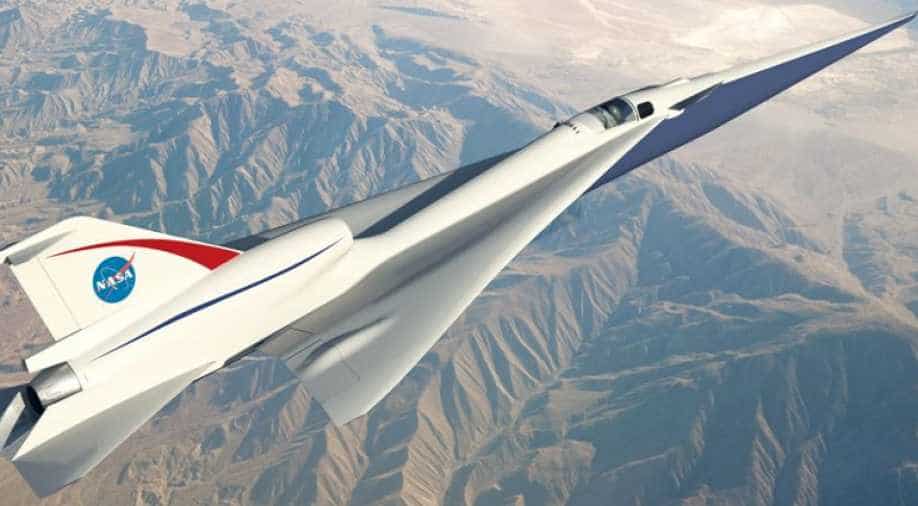 Nasa is all set to build the new Quiet Supersonic Technology X-Plane which could halve flight times. (Image source: Lockheed Martin) Photograph:( Others )

NASA is all set to launch Quiet Supersonic Technology X-Plane which will mark a comeback of supersonic flights after Concorde retired in 2003. || ||Supersonic plane history: Concorde and Tupolev Tu-144.

Taking a step forward in supersonic transport, NASA has decided to build a supersonic aircraft for commercial use.

NASA is all set to launch Quiet Supersonic Technology(QueSST) X-Plane which will mark a comeback of supersonic flights after Concorde retired in 2003.

NASA in a report has also confirmed that it has conducted few experimental flights in Florida's space coast. The agency is also planning to get a better understanding of the impact of low-altitude atmospheric turbulence on sonic booms by continuing with its assessment in Florida. NASA has worked out its design for the supersonic plane in collaboration with Lockheed Martin.

According to a report, the new supersonic aircraft is 94 feet long with room for one pilot. The overall budget for the project is nearly $390 million.

“To that end, it’s worth noting that it's been almost 70 years since Chuck Yeager broke the sound barrier in the Bell X-1 as part of our predecessor agency's high-speed research. Now we’re continuing that supersonic X-plane legacy with this preliminary design award for a quieter supersonic jet with an aim toward passenger flight," Bolden added.

Nasa is all set to build the new Quiet Supersonic Technology X-Plane which could have flight times. (Image source: Lockheed Martin) (Others)

The new supersonic passenger plane is designed to fly at 55,000 feet above the ground. The design also proposes to solve the noise problem that is associated with such aircrafts. NASA with its new project is aiming at establishing an advance low-sound supersonic flight that will be a revolutionary step in the supersonic aerospace industry.

Commercial supersonic transports became a reality in the 20th century with the two supersonic planes: Concorde and Tupolev Tu-144.

Concorde was an elite supersonic passenger jet airliner that was introduced as part of a joint venture by the UK and French government on March 2, 1969. The aircraft was a huge success as it travelled with a speed of over twice the speed of sound.

It was generally preferred by rich passengers who could afford the tickets of the supersonic flight. It soon became a hotspot for high profile Hollywood bigwigs and rock stars.

The Concorde's budget in 1962 was projected at £160m which would be around £2 billion in today's money.

However, Concorde flights were discontinued following a plane crash on July 25, 2000 in Gonesse near Paris in which a hundred passengers were killed. The fall in air travel after 9/11 attacks was also a major reason for its retirement.

The supersonic aircraft was Russian-built Tu-144. The plane was a product of the former USSR and flew for twenty years - 1963 to 1983.

Now with the second generation NASA supersonic airliners in the horizon, the age of supersonic flights could be making a comeback with the QueSST.