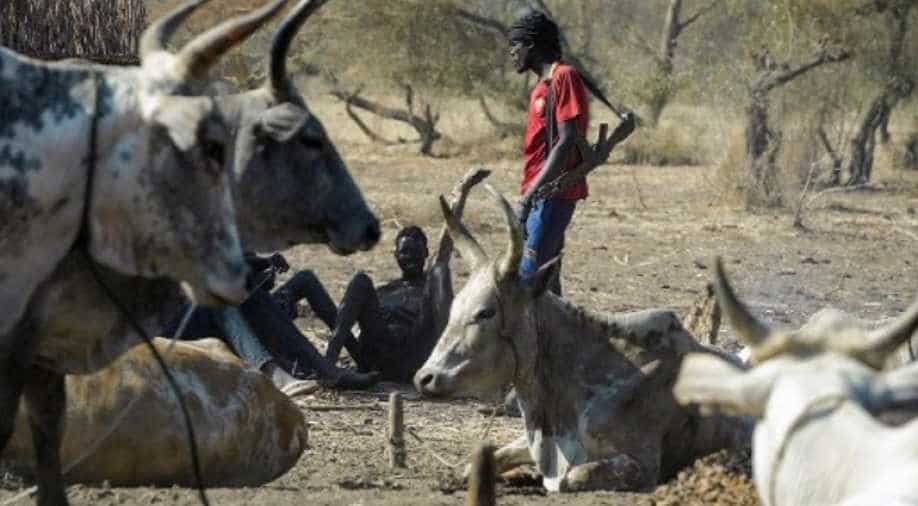 The passing of centuries seems to have changed little in the ebb and flow of life for herders in remote South Sudan, whose cattle serve as a bank account and play a core role in every aspect of life.

Weak rays of early morning sun seep through the smoke rising from smouldering piles of dried dung, keeping flies away from the precious cattle.

Children instinctively reach down for the white ash, a natural mosquito repellent, and rub it on their skin as women set to milking and men prepare for a long day seeking pasture at the peak of the dry season.

The passing of centuries seems to have changed little in the ebb and flow of life for herders in remote South Sudan, whose cattle serve as a bank account and play a core role in every aspect of life.

There has, however, been one devastating shift.

Instead of their traditional spears, cowherds now carry automatic rifles that have transformed cattle raids, a generations-old phenomenon, into massacres that have unleashed brutal cycles of vengeance.

"It is good to have a weapon because it helps you to protect the cattle," said Puk Duoth, 25, a header from a camp outside the northeastern village of Udier.

While South Sudan's elites signed a power-sharing truce in September 2018, cattle raids have worsened, highlighting the herculean task required to resolve local conflicts in a society shattered by war.

According to the UN peacekeeping mission UNMISS, 218 members of herder communities were killed in January in tit-for-tat attacks -- almost three times the toll of 73 in the four months from October 2017 to January 2018.

Observers blame a deadly cocktail of factors for the rising body count: a breakdown of law and order in the war-torn nation, an influx of guns and inflation in the bride price -- paid in cattle.

In these parts, cows are everything.

In the culture of the Nuer and Dinka peoples -- South Sudan's largest herder communities -- boys are named after a favoured bull, and songs are written to glorify the long-horned beasts.

"If you are sick, then the cow can be sold and the money used for treatment," says Beny Chuer, a Dinka chief from Amazing camp outside the central city of Rumbek -- one of the areas worst affected by raids and revenge killings.

"If a mother dies leaving a small baby, that child will live because a cow will be milked to feed it."

Cattle is currency -- each head worth about $500 (440 euros). The more a man owns, the more admiration he garners.

"If you are sitting in a community meeting and you are talking rubbish, but people know you have many cows, you will be honoured," said Peter Machar, of the NGO Saferworld working on local conflicts.

In his 1940 study of the Nuer people, British anthropologist Edward Evan Evans-Pritchard found this single-minded preoccupation frustrating in his research efforts.

"I used sometimes to despair that I never discussed anything with the young men but livestock and girls and even the subject of girls led inevitably to that of cattle," he wrote.

"For us, a cow is the source of money," said chief Chuer, well over two metres (6 feet, 7 inches) tall -- a genetic legacy perhaps of tall women being viewed as more valuable in herder communities.

He boasts that his tallest daughter earned him a whopping 250 cows.

This is part of the cause of conflict, said Peter Machar's colleague Majok Mon, his own first name a Dinka word for the markings on a bull.

Bride prices soared as donor money poured into the country after independence from Sudan, allowing politicians, military men and the well-connected to enrich themselves and "get a lot of money" to pay for a wife, he said.

The average price went up from about 20 head of cattle to 100, in a country where the majority of people follow the tradition.

Suddenly, many young men could not afford to get married unless they raided cattle from other communities.

Guns flooded the country between the war for independence, achieved in 2011, and the internal conflict that erupted two years later as President Salva Kiir and rival Riek Machar fell out.

Both sides armed young herders and mobilised them to fight, said Peter Machar.

As any semblance of law and order collapsed, the warring also destroyed traditional systems, managed by tribal chiefs, for settling feuds.

"What brought the issue of cattle raids is the gun... if you don't have a gun, then you will be monitored slowly, slowly until you are shot and your cows were taken, but if you have your gun, then you can shoot" in defence, said Chuer.

While fighting has stopped in most of the country as a result of the peace deal, this has changed nothing for herder groups nursing long-standing grievances unrelated to the national tug of war for power.

And with the attention elsewhere, armed herders are launching increasingly deadly military-style attacks on rival camps, with women and children among the victims.

The reality in these remote communities "is very far from what is happening with the elites in Juba," United Nations special envoy David Shearer told AFP.

A report on the "militarisation" of cattle raiding in South Sudan, published last year in the Journal of International Humanitarian Action, warned that leaders like Kiir and Riek Machar, "has undermined the traditional mechanisms that once governed violence in order to further their individual political interests, no longer have control over these raiders either."

All these factors bode ill for prospects of peace in a country whose youth has known nothing but conflict.