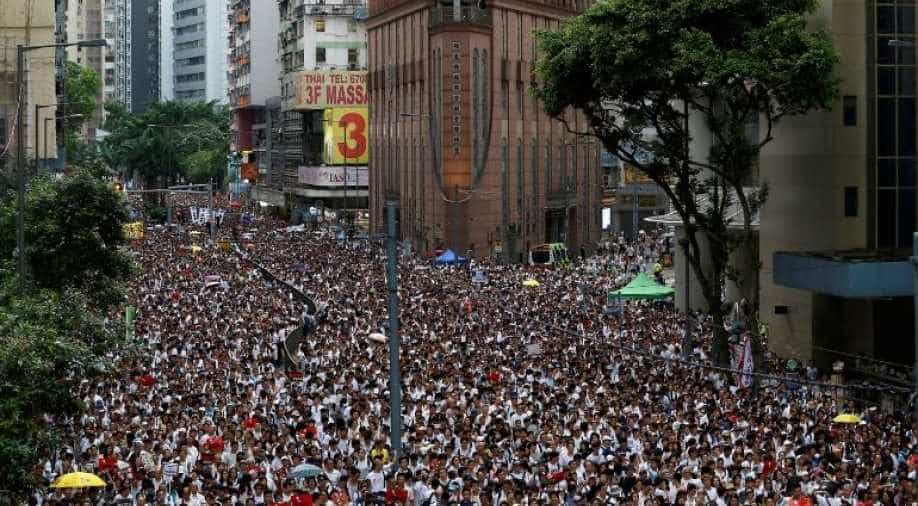 Hong Kong's pro-Beijing leaders are pushing a bill through the legislature that would allow extraditions to any jurisdiction with which it does not already have a treaty -- including mainland China.

Hong Kong witnessed the largest protest since its 1997 handover to China on Sunday as huge crowds massed against plans to allow extraditions to the mainland, a proposal that has plunged the city's pro-Beijing leaders into a crisis.

Organisers said more than a million people marched in blazing summer heat through the cramped streets of the financial hub's main island in a noisy, colourful demonstration calling on the government to scrap its planned extradition law.

The demonstration was by far the biggest the international finance hub has experienced since it was returned to China by Britain -- beaten only by a 1.5 million-strong demonstration during colonial rule in 1989 supporting the Tiananmen protesters.

Hong Kong's pro-Beijing leaders are pushing a bill through the legislature that would allow extraditions to any jurisdiction with which it does not already have a treaty -- including mainland China.

But the proposals have sparked an outcry and birthed an opposition that unites a wide cross-section of the city.

"If mainland China can arbitrarily extradite some people to the mainland, it would destroy not only our way of living here in Hong Kong, it would also destroy our economy, because many people would leave this place," protester Tommy Lo told AFP.

For more than six hours on Sunday dense crowds snaked their way through the city chanting "Scrap the evil law!" and "Oppose China extradition!", the lines of white-dressed demonstrators stretching for miles.

"There are 1,030,000 people at today's march," an organiser told crowds outside the city's legislature at the march's end, prompting a cacophony of cheers and applause as new people arrivals continued to join.

Police, who historically give much lower figures than organisers, put the peak crowd size at 240,000 -- still their second highest estimate since handover.

Sunday's protest was easily on par with one in 2003 when an estimated half a million demonstrators forced the government to shelve a deeply unpopular national security law.

But it is unclear if the city's current leadership will be moved.

The city's appointed leader Carrie Lam has staked her political reputation on the bill passing.

Ignoring the protests could fuel anger or even a return to the unrest of 2014 when pro-democracy protesters took over key intersections of the city for two months. Organisers said Sunday they would "upgrade their actions" if the government did not drop the bill.

But backtracking by Lam might embolden opponents and anger Beijing. Several senior Communist Party leaders in China have voiced support for the bill.

Opposition to extradition has come from a wide political and social spectrum.

Lawyers have held sombre marches dressed in black, anonymous senior judges have given critical media interviews and the city's two main legal groups -- the Law Society and the Bar Association -- have urged a rethink.

Chambers of commerce are also rattled, adding to criticism from the United States, Canada, former colonial power Britain and many European governments.

Hong Kong's leaders say the law is needed to plug loopholes and stop the city being a bolthole for mainland fugitives.

They say dissidents and critics will not be extradited and have urged the bill's quick passage to extradite a Hong Kong man who is wanted in Taiwan for murdering his girlfriend.

But critics fear the law would entangle people in China's opaque and politicised court system and say the government is using the Taiwan case as a Trojan Horse.

The proposed law has been fast-tracked through the city's government-dominated legislature and on Wednesday it will receive its second reading, with plans to have the law on the statute books by late July.

In recent weeks Lam's administration has made some key concessions.

They have removed nine economic crimes from a list of extraditable offences and said only offences that carry seven years or more in jail will be considered, up from three. Requests will only be considered from China's top prosecuting authority.

Those steps have received a cautious welcome from some business groups, but others have seized on the concessions as a tacit admission that China's courts are not impartial.

Many protesters on Sunday said they no longer trust the Hong Kong government to stick to promises that critics would never be sent to the mainland.

Suspicion of China was worsened by a series of high profile disappearances of people who later appeared in mainland detention, including a group of dissident publishers and a billionaire who disappeared from a top hotel.

Protester Leo Yuen, who said he worked in the arts sector, described the disappearances as "horrifying".

"You can foresee how easily this would happen again if the bill is passed," he told AFP.