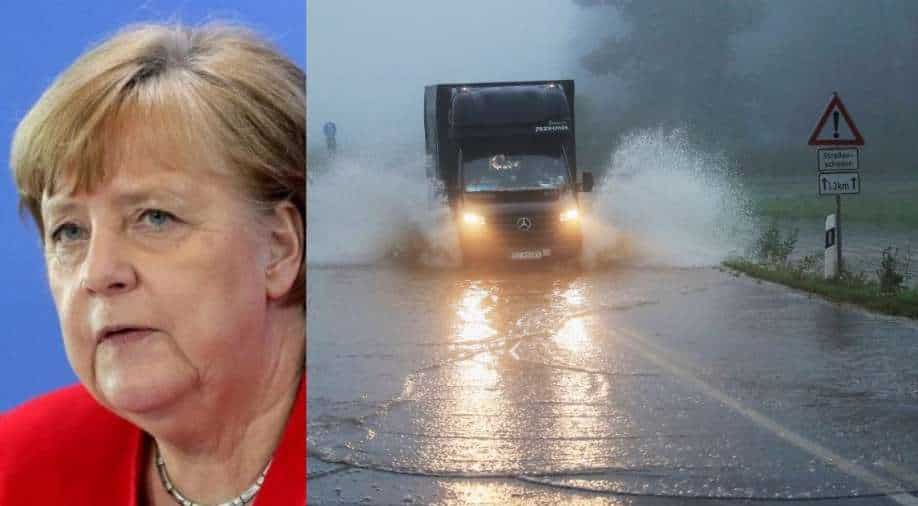 With the September 26 vote fast approaching, the outgoing Merkel will check in on the flood-stricken community of Altenahr in Rhineland-Palatinate state on Friday, followed by two inundated towns in Laschet's own neighbouring North Rhine-Westphalia on Sunday

German Chancellor Angela Merkel will return on Friday to the scene of deadly flooding in July in a bid to restore support for her embattled party before this month's national election.

After the disaster put crisis management and climate change back at the top of the agenda, Merkel's Christian Democrats (CDU) and their unpopular candidate, Armin Laschet, have been haemorrhaging support.

With the September 26 vote fast approaching, the outgoing Merkel will check in on the flood-stricken community of Altenahr in Rhineland-Palatinate state on Friday, followed by two inundated towns in Laschet's own neighbouring North Rhine-Westphalia on Sunday.

Merkel, who will retire from politics when a new government is in place, made a well-received visit in the immediate aftermath of the deluge, offering empathy and billions in federal aid to rebuild ravaged infrastructure.

The appearance stood in marked contrast with a politically calamitous stop by Laschet in what is now widely seen as a fateful moment in the erstwhile frontrunner's campaign.

As President Frank-Walter Steinmeier gave a sombre speech mourning the floods' 181 victims, the CDU leader was caught on camera behind him joking and laughing with local officials.

"Merkel went there and listened and had the right expression and the right gestures and Laschet managed to put his foot in it," said Muench, director of the Academy for Political Education near Munich.

She noted that after Merkel's 16 years in office, her shadow looms large over the race -- particularly as Laschet's chief rival, Social Democratic Finance Minister Olaf Scholz, also tries to present himself as her rightful heir.

His party is now polling at around 25 percent, four points up on Laschet's conservatives.

The Christian Democrats are now encouraging as many joint appearances as possible between Merkel and Laschet, who will accompany her on Sunday.

However the visit carries some political risk as emotions are still running high in the stricken region.

In the village of Dernau, where entire streets are still uninhabitable, clean-up volunteer Christine Jahn complained this week about red tape holding up tranches of a pledged 30 billion euros ($36 billion) in federal and state aid.

"I want less babbling and more getting on with it, so that the money arrives without bureaucracy," the 66-year-old told AFP.

Public anger has also focused on a failure to sufficiently warn vulnerable residents or rush them to safety before the waters surged through their community.

Prosecutors in August launched a criminal investigation against the district chief of hard-hit Ahrweiler for negligence as warnings were made belatedly, resulting in the deaths of dozens of residents.

The catastrophe also renewed the focus on climate change, which 80 percent of Germans say they want more political action to mitigate, according to a poll for broadcaster RTL published on Wednesday.

A major international study last month found that manmade global warming made the deadly floods in Germany as well as Belgium up to nine times more likely.

In the Ahr and Erft regions of Germany, 93 millimetres (3.6 inches) of rain fell in a single day at the height of the crisis.

In the immediate aftermath, Laschet drew criticism for seemingly contradictory statements in a TV interview on the urgency of addressing the climate crisis.

Asked whether he thought the government had made mistakes on the issue, Laschet said it would be wrong to "change policies just because of one day" in what sounded to many critics like a flippant response to the disaster.

All eyes will now be on Laschet, whose CDU has shed around 13 points in support since he became party leader in January and is still on a downward slide, to see whether he can find his footing again before election day.