Lukashenko gets birthday call from Putin, as tanks are seen in Minsk amid protests 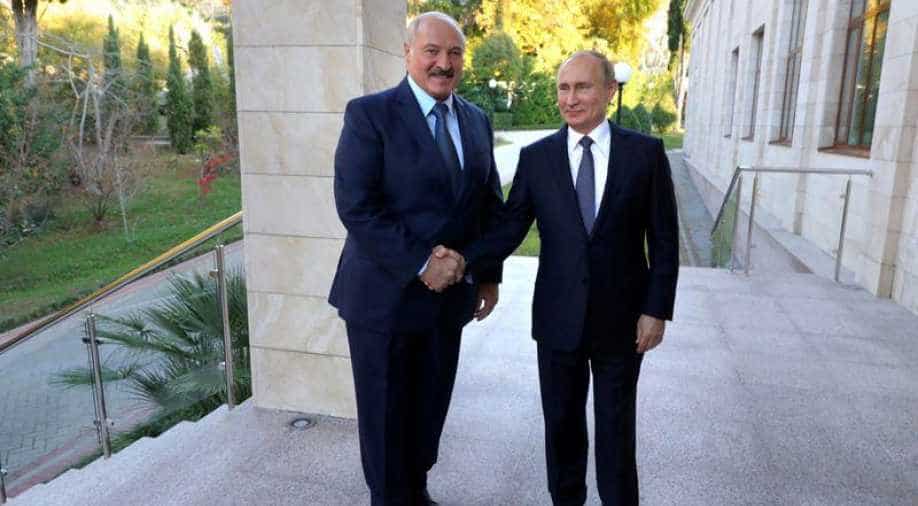 The president, in office for 26 years, has shown no inclination to step down despite protesters keeping up pressure on him to resign.

The president, in office for 26 years, has shown no inclination to step down despite protesters keeping up pressure on him to resign.

For the second weekend in a row he appeared in a black cap and carrying an automatic rifle while walking around his residence, according to a photo published by Russia 's RIA news agency.

Lukashenko, who turned 66 on Sunday, is struggling to contain weeks of protests and strikes since winning an August 9 election his opponents say was rigged. He denies electoral fraud and has said the protesters, whom he previously called "rats", are backed from abroad.

Russian President Vladimir Putin used a birthday phone call to invite Lukashenko to visit Moscow, a sign of the Kremlin 's willingness to back Lukashenko as he grapples with the unrest and the threat of new Western sanctions.

Tens of thousands of protesters streamed into central Minsk, carrying balloons, flowers and flags, in the afternoon. Belarus had a white-red-white flag for a brief period in the early 1990s and it has become a symbol of its anti-government protests.

Passing cars honked their horns in solidarity. Some women lay down in protest in front of a cordon of helmeted security forces.

Protesters then converged on Lukashenko 's residence, which was guarded by a wall of security forces carrying shields. A column of armoured military vehicles was seen driving towards the city centre.

Police made sporadic detentions throughout the day, bundling people into prisoner vans. At least 140 people were detained, the interior ministry said, according to RIA. Some protesters resisted arrest by what appeared to be plain-clothes officers, an eyewitness said.

Earlier on Sunday, video footage shared by local media showed women dressed in traditional dress laying several pumpkins in front of the main government building, a folk custom intended to signal the rejection of a suitor.

In a holiday atmosphere, the protesters occasionally sang songs. At one point, a man draped in a flag got down on one knee and made a marriage proposal to a woman who accepted with a hug and a kiss as bystanders cheered.

An aide to the president, Nikolai Latyshenok, ruled out holding talks with the opposition and said that, in his personal opinion, only around 20-30% of Belarusian society was against the president, Russian news agencies reported.

"It has been said many times, let 's decide everything peacefully," TASS cited him as saying.
One of the country 's largest mobile operators, A1, said it had reduced the capacity of mobile internet bandwidth at the government 's request.

Belarus, meanwhile, is Russia 's closest ex-Soviet ally and its territory is an integral part of Moscow 's European defence strategy. Nevertheless, Lukashenko is seen in Moscow as a prickly partner.

In the biggest sign yet of Russia 's willingness to intervene to prop up Lukashenko, Putin said on Thursday the Kremlin had set up a "reserve police force" at Lukashenko 's request, although it would be deployed only if necessary.

"It was agreed to hold a meeting in Moscow in the coming weeks," the Kremlin said in a statement after the leaders ' call on Sunday.

The European Union is gearing up to impose new sanctions on Belarus. Lukashenko threatened on Friday to cut off European transit routes across his country in retaliation.

A onetime manager of a Soviet collective farm, Lukashenko has faced a wave of unrest including from sections of society normally seen as loyal, such as journalists from the tightly-controlled state media who quit and a sitting ambassador, who also resigned.

Hundreds of athletes, including Olympic medallists, published a demand for new elections in a sports website.