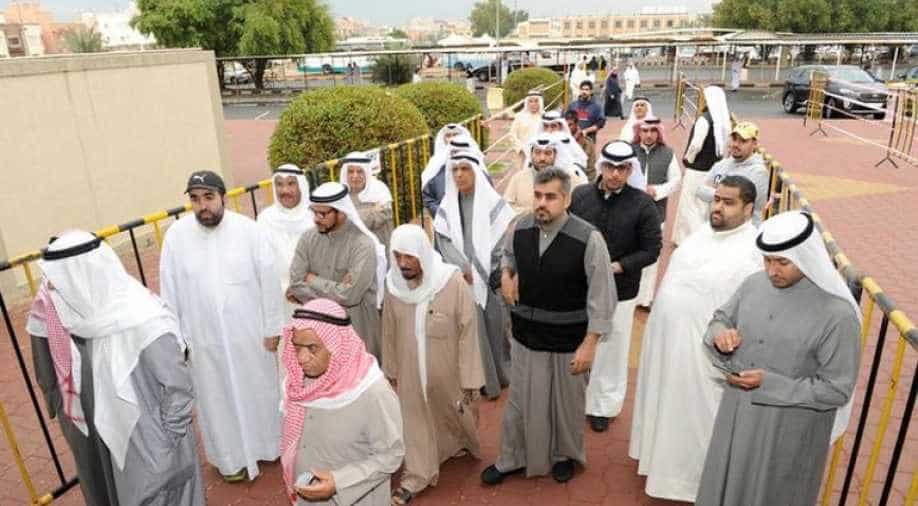 The opposition and its allies won 24 of the assembly's 50 seats. In pic, Kuwaiti men cast their votes in Kuwait City on November 26. Photograph:( Reuters )

The opposition and its allies won 24 of the assembly's 50 seats, the electoral authority announced following Saturday's snap election called after a dispute over the hiking of petrol prices. The Islamist, nationalist and liberal opposition contested the election after a four-year boycott in protest over the government's amendment of the key voting system.

Around half of the opposition candidates who won seats are Islamists from a Muslim Brotherhood-linked group and Salafists. Voters dealt a heavy blow to candidates from the outgoing parliament, with more than half of them failing to make it into the new assembly.

Two of three cabinet ministers also failed in their bid for re-election. "Surprise," read the main headline on the website of Al-Qabas newspaper, adding that the election had resulted in a "62-percent change" in the parliament.

One third of the members of the new parliament are relatively young and fresh on the political scene.

Only one woman was elected and the Muslim Shiite minority was reduced to six seats from nine in the previous house.

But despite the outcome, Emir Sheikh Sabah al-Ahmad Al-Sabah is set to ask the incumbent prime minister or another leading figure from the ruling family to form a new cabinet. "I think this composition will lead to confrontations between opposition MPs and the next government," political analyst Mohammad al-Ajmi told AFP.

"There are many issues that could spark disputes: economic measures, revoking of citizenships and others," said Ajmi.

In the past two years, the government revoked the citizenship of several leading opposition figures and their family members, citing various motives. The emir called the election after dissolving the previous parliament due to a dispute over increasing petrol prices. Hours after the results were issued, he congratulated the winners for the "trust" given to them by voters, wishing them success in "serving the homeland".

Saturday's election saw a turnout of about 70 percent amid divisions over cuts in subsidies due to falling oil revenues.

'Confrontations from day one'?

Analyst Dahem al-Qahtani said the opposition had made an "impressive showing". "Kuwaiti voters have punished those who let them down... and rejected the austerity measures," he told AFP.

Qahtani said for the government to prevent a standoff, it should make initiatives for cooperation with the opposition. "If the government makes such initiatives, it may succeed in striking a needed political balance and avoid disputes," he said.

"If not, confrontations could start from day one," Qahtani said.

Kuwait was rocked with a series of political crises between 2006 and 2013 when an entirely pro-government parliament was elected.

A majority of the elected MPs have openly said they would oppose any austerity measures by the government to boost non-oil income. The government's overwhelming control in the previous assembly has been reduced to a fragile majority.

The majority is because unelected cabinet ministers also become members of parliament, helping to consolidate the grip of the Al-Sabah ruling family. Unlike other oil-rich Gulf Arab states, Kuwait has an elected parliament with powers to hold ministers to account, even though senior members of the ruling family hold all top cabinet posts.

The set-up has led to repeated standoffs between lawmakers and the ruling family and Saturday's vote was the seventh general election in a decade. But the strength of the opposition allows them to grill ministers and possibly even vote them out of office.

The election came with Kuwait facing its most acute budget crisis in years. Oil income, which accounts for 95 percent of government revenues, has nosedived by 60 percent in the past two years.

Kuwait's native citizens make up about 30 percent of its 4.4 million population. The emirate pumps 3.0 million barrels of oil daily.