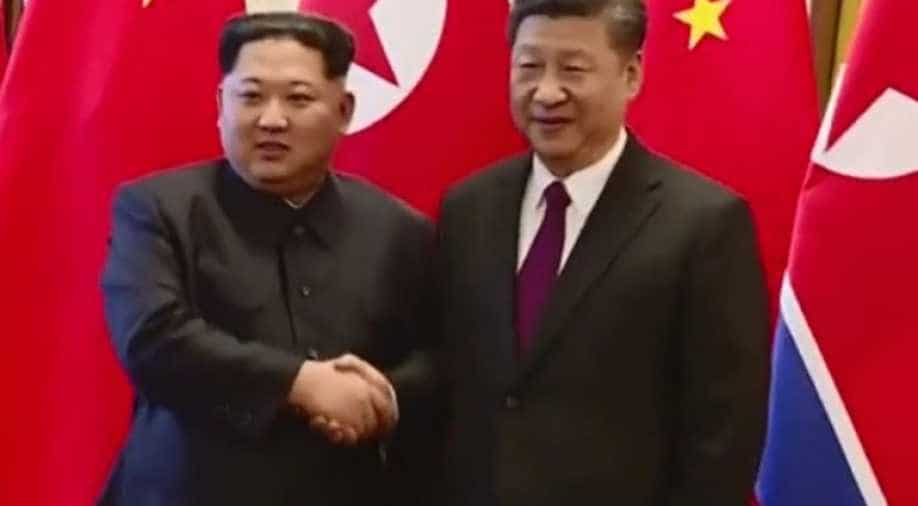 Discussions between Pyongyang and Washington over the North's nuclear arsenal have stalled since Kim and Trump's high-profile summit in Singapore, with the US insisting that sanctions must remain in place until it gives up its weapons, and the North demanding an immediate easing.

North Korean leader Kim Jong Un's surprise trip to China could herald a new round of summitry on and about the peninsula, analysts say, but may also be an attempt to pressure US President Donald Trump as negotiations between them falter.

Discussions between Pyongyang and Washington over the North's nuclear arsenal have stalled since Kim and Trump's high-profile summit in Singapore, with the US insisting that sanctions must remain in place until it gives up its weapons, and the North demanding an immediate easing.

In his New Year's address -- always a key moment in the North Korean political calendar -- Kim said that if Washington persisted with its approach, "we may be compelled to find a new way for defending the sovereignty of the country and the supreme interests of the state".

With his visit to China, "Kim is eager to remind the Trump administration that he does have diplomatic and economic options besides what Washington and Seoul can offer," said Harry Kazianis of the Center for the National Interest in Washington.

The US should be "quite concerned" by any effort by Pyongyang to strengthen ties with Beijing, he added, as almost all North Korean trade flows through China and any improvement in relations would weaken the Trump administration's "maximum pressure" strategy.

With US and Chinese officials meeting in Beijing to address a trade row that has roiled global markets, he said, "the timing could not be any better" for the Chinese side. "It shows Beijing clearly has a North Korea card to play if it sees fit."

It has always feared the collapse of its neighbour, which would threaten floods of refugees streaming onto its territory and the prospect of US troops stationed on its border in a unified Korea, but in recent years became increasingly frustrated with its nuclear antics.

That changed last spring, when Kim ended six years as a diplomatic recluse to go to Beijing and pay his respects to Xi in his first overseas trip as leader.

A series of visits have followed in both directions -- although Xi has yet to reciprocate with a trip to Pyongyang -- along with three summits between Kim and the South's President Moon Jae-in, and Beijing lent Kim a plane to travel to Singapore.

At their meeting, Kim and Trump signed a vague pledge to work towards denuclearisation of the Korean peninsula in a blaze of publicity, but the two sides have since disagreed over what that means.

Kim did not visit Seoul by the end of last year, despite South Korea's Moon suggesting he would do so, but speculation of a second Kim-Trump summit to try and break the deadlock has mounted.

A location for the meeting was being negotiated, the US president said at the weekend, leading sceptics to express hopes that its substance and outcomes were also being discussed.

Kim's Beijing trip was an indication he could soon travel to Seoul or hold a second summit with Trump, said Cheong Seong-chang, a senior researcher at the Sejong Institute in Seoul.

Last year Kim visited China ahead of his summits with both Trump and Moon, he pointed out.

The accompanying delegation, he noted, included Kim Yong Chol, North Korea's counterpart to US Secretary of State Mike Pompeo in talks, suggesting that "sanctions relief for Pyongyang" would be on the agenda.

Under Moon, the South has pursued engagement with the North, and analysts in Seoul argued that Chinese concessions could improve the prospects of a deal.

"North Korea could feel insecure or threatened if it gives up its nuclear programmes entirely," said Koh Yu-hwan, professor of North Korean studies at Dongguk University.

"But if Beijing promises Pyongyang that it will provide economic assistance and guarantee its regime security if Pyongyang abandons atomic weapons, it could make the North feel more secure," he told AFP.

Beijing shared Washington's aim of denuclearising Pyongyang, he added, and was "not trying to interfere in the ongoing process between the North and US".

Despite pledges by the Koreas last year to pursue a declaration that the Korean War -- which ended only in an armistice -- is over, little progress has been made, let alone on a full peace treaty.

Beijing sides with Pyongyang on formally ending the three-year conflict, but some suspect North Korea wants to use that to demand US troops in South Korea are withdrawn from the peninsula.