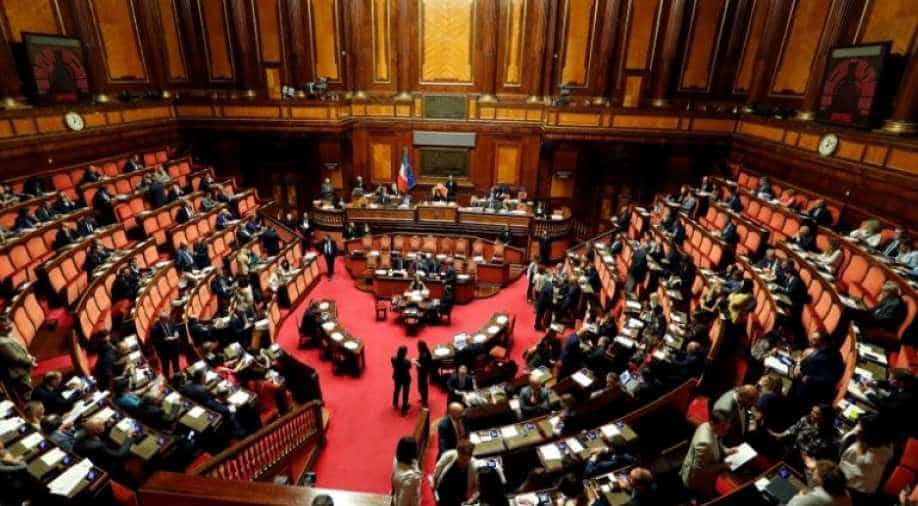 A general view of the Senate hall as the Italy's government is set to face Senate confidence vote on security and immigration decree in Rome, Italy. Photograph:( Reuters )

The Italian government on Monday won a confidence vote in the Senate on a decree targeting charities operating migrant rescue ships, in a victory for Interior Minister Matteo Salvini and his far-right League party.

The Italian government on Monday won a confidence vote in the Senate on a decree targeting charities operating migrant rescue ships, in a victory for Interior Minister Matteo Salvini and his far-right League party.

The government of the League and the anti-establishment 5-Star Movement has been riven by internal strife in recent weeks but won the vote by 160 to 57.

It would have had to resign had it lost the motion.

The decree drawn up by Salvini, who also serves as deputy prime minister, toughens sanctions on charity ships that seek to bring migrants rescued in the Mediterranean to Italy.

The decree had already been passed by the lower house and so now becomes law just a couple of days before parliament closes on Wednesday for the summer recess.

Some 5-Star politicians have expressed reservations about the decree, and some of its senators did not back it in Monday's vote.

Their defection was compensated by the fact the centre-right opposition party Forza Italia did not take part in the vote, saying they agreed with the aims of the decree.

Confidence votes are often used by Italian governments as a way of speeding legislation through parliament, truncating debate and sweeping away opposition amendments.

The decree hikes maximum fines for ships that enter Italian waters without authorization to 1 million euros ($1.12 million) from a previous 50,000.

It also provides for the arrest of captains who ignore orders to stay away and calls on naval authorities to seize their boats automatically.

Salvini has clashed repeatedly with humanitarian groups that pick up migrants off the coast of Libya to bring them to Italy, preventing them from docking until other EU countries agree to take in most of them.

In June, the German vessel Sea-Watch, captained by Carola Rackete, was seized when it entered the port of Lampedusa without permission.

Rackete was later freed from house arrest, prompting Salvini to denounce the judge who issued the ruling.

Salvini`s popularity has soared on the back of his uncompromising, anti-migrant position.

A poll by the Winpoll agency published on Friday in business daily Il Sole 24 ore put support for the League at 39 per cent, making it easily the country`s most popular party with more than double its share of the vote at last year's parliamentary election.