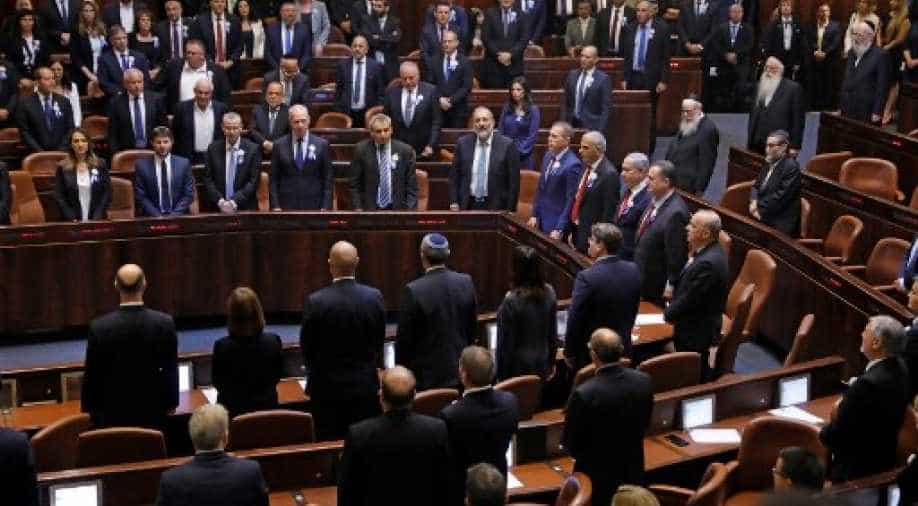 Israeli members of parliament stand during the swearing-in ceremony at the Knesset in Jerusalem on October 3, 2019. Photograph:( AFP )

Members of parliament elected in September 17 polls took their oaths of office in a ceremony that was to a large degree hollow due to deadlocked coalition talks.

Israel's parliament was sworn in Thursday without a new government formed as a deadlocked general election left Prime Minister Benjamin Netanyahu scrambling to find a path to extend his long tenure in power.

Members of parliament elected in September 17 polls took their oaths of office in a ceremony that was to a large degree hollow due to deadlocked coalition talks.

The stalemate has even raised the risk that the new parliament's term will be extremely short since it could cause yet another election.

It would be the third in the space of a year after April polls too ended inconclusively, with Netanyahu unable to form a coalition afterwards.

The prime minister faces even longer odds this time, and as a result, has been seeking to form a unity government that would include his main opponent Benny Gantz and his centrist Blue and White alliance.

At the same time, Netanyahu's lawyers are seeking to fend off corruption charges against him at a four-day, closed-door hearing that began at the attorney general's office on Wednesday.

His unity government efforts have failed so far, with the two sides at odds on a range of issues, including who would be prime minister first in a rotation arrangement.

Israeli President Reuven Rivlin, in his speech to the new parliament, again called on the rival leaders to come together.

"You, elected officials and leaders of the people, face an opportunity and a chance to form a broad government," he said.

"One that will allow us to put the disagreements between us to one side and to work on finding areas of agreement."

Blue and White finished with the most seats in the election -- 33 compared to right-wing Likud's 32.

Neither has a clear path to a majority coalition, but Netanyahu received one more endorsement for prime minister than Gantz from MPs, resulting in Rivlin tasking him with forming a government last week.

He has 28 days to do so, but has signalled he may inform Rivlin before that he is unable to form a government -- a political tactic, not a sign he is throwing in the towel.

Rivlin would then decide whether to ask Gantz to try to form a government or demand that parliament agree on a candidate with a vote of at least 61 out of 120 members.

The president has set out a unity government compromise that could see Netanyahu remain prime minister, but step aside if indicted while retaining the title.

Gantz would then take over on an interim basis.

Netanyahu says he wants to negotiate based on that proposal, but Gantz has rejected it, saying his Blue and White cannot serve in a government with a prime minister facing a severe indictment.

He also says he should be prime minister first under any rotation arrangement since his party has the most seats.

Netanyahu has shown no sign he would yield the post he has held for a total of more than 13 years, the longest in Israeli history, to allow Gantz to be premier first.

"There is no other choice than to comply with the will of the people and put in place a broad national unity government," Netanyahu told Likud members before the swearing-in.

Gantz told his party: "I call upon Netanyahu: Do not barricade yourself in your position."

"We will take the reins from here and lead the country for the good of the citizens."

Yair Lapid, Blue and White's number two and who was to rotate as prime minister with Gantz if their party won, announced he was abandoning that plan if a unity government was formed to give it the best chance to succeed.

While parliament was being sworn in, Netanyahu's pre-indictment hearing continued across town.

Only Netanyahu's lawyers and not the prime minister himself attended the hearing, which gives them a last chance to convince Attorney General Avichai Mandelblit not to file corruption charges.

Mandelblit has said he intends to indict Netanyahu for bribery, fraud and breach of trust in three separate cases.

Netanyahu, who denies all the allegations, is accused of acting on behalf of wealthy supporters and businessmen in exchange for gifts or favourable news coverage.

The first day of the hearing on Wednesday stretched some 11 hours.

Following the hearing's conclusion on Monday, the attorney general's deliberations on whether to issue the indictments are expected to last weeks.

Separately on Thursday, Arab Israeli MPs did not attend the swearing in as they took part in a general strike over violence in Arab communities and what they call the lack of a police response.

The mainly Arab Joint List won 13 seats in the election, making it the third-largest bloc in parliament.