IS suspects held at Istanbul airport days after attack 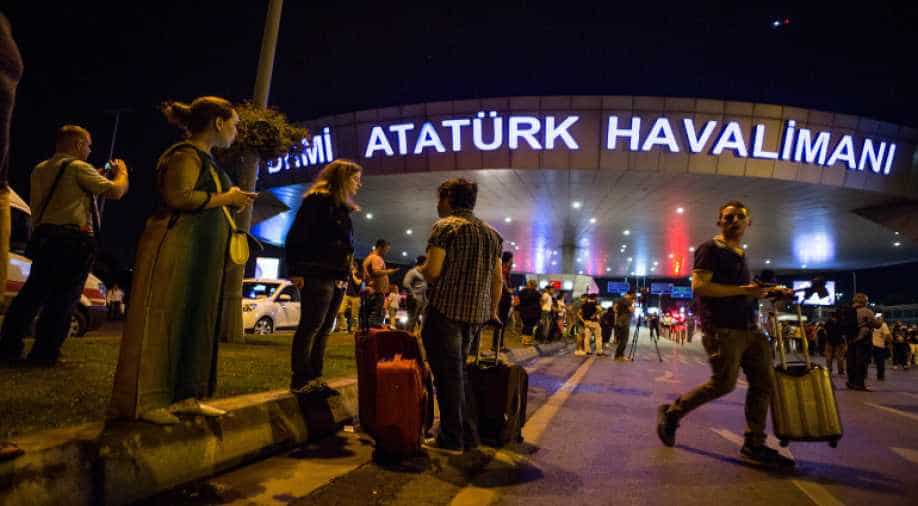 A team of 80 special forces troops have been patrolling Ataturk airport, one of Europe's busiest hubs, since Sunday Photograph:( Getty )

Follow Us
Two suspected Islamic State jihadists have been detained at Istanbul's Ataturk airport days after it was hit by suicide bombers, as Turkish authorities move to boost security at sensitive sites.

Dogan news agency said the two suspects held late Sunday were Kyrgyz nationals, identifying them only by their initials, KV and FMI, aged 25 and 35 respectively.

Police found night-vision binoculars and military-style clothes in their suitcases, the agency said, along with two passports in different names.

The pair were questioned by anti-terror police in Istanbul. It was not clear whether they had been leaving or arriving at the airport.

Their detention came as 13 suspects, including three foreigners, were charged Sunday over the June 28 gun and suicide bomb assault at the airport that killed 45 people including 19 foreigners.

Officials believe the Islamic State group was behind the attack, the worst in a series to hit Turkey's biggest city this year.

In total police have detained 29 people "including foreigners" in connection with the airport assault, Prime Minister Binali Yildirim said.

Yildirim said Monday that police were on high alert and had boosted their presence at the airport and other sensitive Istanbul sites including metro stations and the Marmaray rail tunnel.

A team of 80 special forces troops have been patrolling Ataturk airport, one of Europe's busiest hubs, since Sunday.

Last week's carnage "followed a new model" of attack in Turkey, Yildirim said, noting that the bombers had first sprayed passengers with bullets, allowing them to get inside the terminal before blowing themselves up.

Of more than 200 people injured, 47 are still in hospital.

Authorities believe the attackers were a Russian, an Uzbek and a Kyrgyz national.

State news agency Anadolu has named two of them as Rakim Bulgarov and Vadim Osmanov, without giving their nationalities.

Central Asia's former Soviet republics have been a major source of foreign jihadists travelling to fight with IS and other extremist groups in Iraq and Syria.

Turkish media have identified the strike's organiser as Akhmed Chatayev, the Chechen leader of an IS cell in Istanbul who allegedly masterminded two other deadly attacks that killed tourists in the city.

Turkey has been rocked by a series of attacks over the past year, blamed on both IS jihadists and Kurdish rebels.