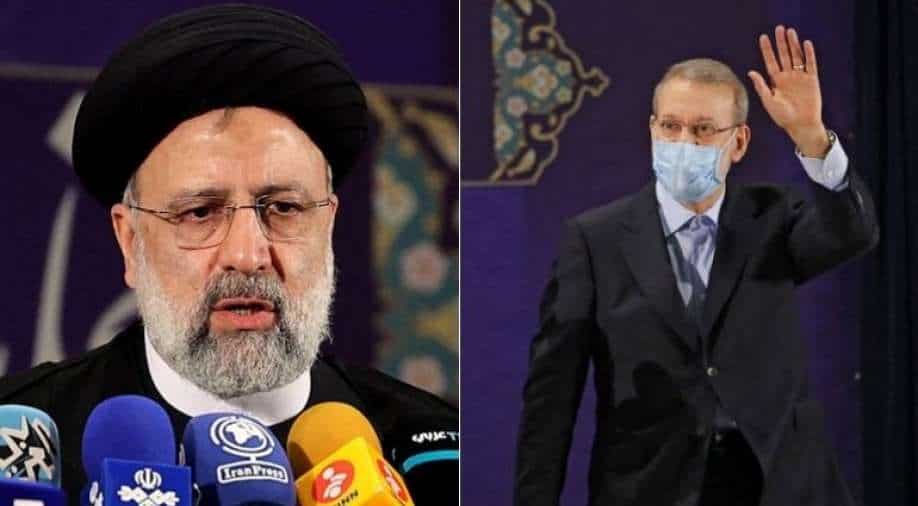 Two Iranian political heavyweights, ultra-conservative Ebrahim Raisi and moderate conservative Ali Larijani, on Saturday, launched what may be the main battle in next month's presidential election.

Hopefuls have been registering ahead of June 18 polls to select a successor to moderate President Hassan Rouhani, who is constitutionally barred from running for a third consecutive term.

First to throw down the gauntlet on Saturday was Larijani, a long-time parliament speaker and now advisor to the supreme leader Ayatollah Ali Khamenei, submitting his name at the interior ministry early on the final day of registration.

Then it was the turn of judiciary chief and one-time presidential hopeful Raisi, who was Rouhani's leading rival in 2017 elections, to announce his own candidacy.

While several other hopefuls have thrown their hats into the ring, "the main clash will be between Mr. Raisi and Mr. Larijani," Masoud Bastani, a Tehran-based journalist told AFP.

Since registration to run in the election began Tuesday, more than 300 hopefuls have submitted bids to stand, according to the interior ministry.

All the hopefuls will be vetted by the conservative-dominated Guardian Council, who will publish a list of approved candidates by May 27, after which campaigning begins.

'A rival to corruption'

Larijani threw the first jab at Raisi and at several other candidates with military backgrounds, in a press conference after registering.

"The economy is neither a garrison nor a court that would be managed with shouts and orders," he told reporters.

He said he had put his name into the race because he felt that other presidential hopefuls were not capable of solving the country's "main problem" -- the sanctions-hit economy.

Larijani is a supporter of the 2015 nuclear deal with world powers, which had offered Iran relief from sanctions in return for limitations on its nuclear activities.

The deal has been on life-support since former US president Donald Trump unilaterally withdrew Washington from it in 2018, and reimposed punishing sanctions on Tehran.

Raisi, in comments seemingly aimed at Rouhani's camp and allies like Larijani, said those responsible for Iran's "current situation cannot be those who change the current situation".

He told journalists he was "a rival to corruption, inefficiency and aristocracy" and urged "even those who feel hopeless" to vote.

In a statement, Raisi also said he came forward because of "public demand," and aims to run "independently in order to bring about a change in the executive management of the country".

Raisi was deputy prosecutor at the Revolutionary Court of Tehran during the 1980-88 Iran-Iraq war that broke out shortly after the Islamic revolution.

Human rights organisations, exiled opposition members and dissidents have accused the tribunal of overseeing the execution of political prisoners without due legal process during his tenure.

Raisi was appointed by the supreme leader Ayatollah Ali Khamenei in 2019 to lead the judiciary, taking over from Sadegh Amoli Larijani, Ali's brother.

This is Larijani's second run for the presidency. He ran in 2005, which saw a surprise victory by the ultraconservative Mahmoud Ahmadinejad -- who has also put his name in to run this year.

Seen today as a prominent establishment figure, Larijani was at the time in charge of Iran's nuclear negotiations with the West, a post he quit two years later over serious disagreements with Ahmadinejad.

Larijani proved to be a key ally of Rouhani, elected in 2013 on a platform of ending Iran's international isolation by reaching a nuclear agreement -- something eventually signed two years later.

Larijani's candidacy comes as Iran and world powers hold in talks in Vienna, seeking to revive the deal.

The nuclear accord has been a constant target of criticism by Rouhani's opponents, and its fate is expected to one of the major issues in the June poll.