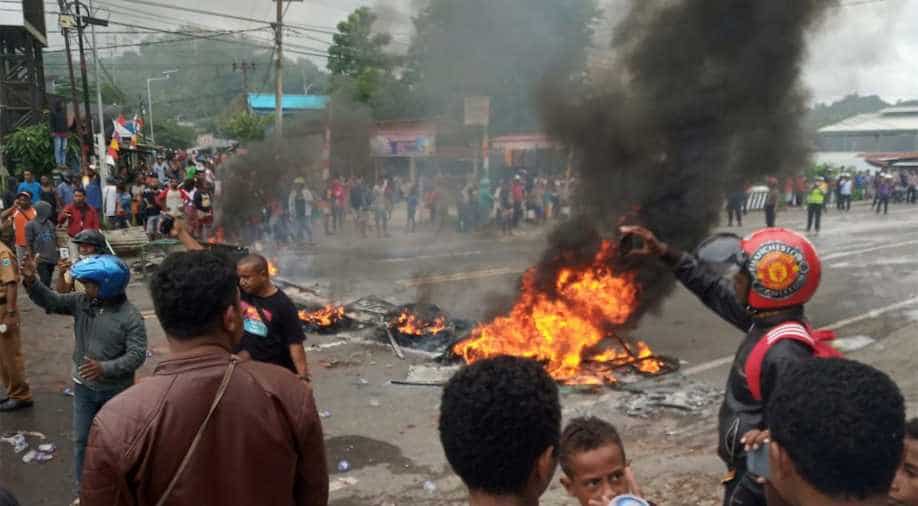 People burn tires during a protest at a road in Manokwari, West Papua, Indonesia. Photograph:( Reuters )

Thousands of Papuans took the streets of the cities of Sorong, Manokwari and Jayapura on Monday, blocking roads, damaging an airport and torching government buildings.

Indonesia sent 200 more police officers to Papua on Tuesday and reined in internet speeds to "prevent hoaxes from spreading" as civil unrest persisted in some parts of the country's easternmost area, officials said.

Thousands of Papuans took the streets of the cities of Sorong, Manokwari and Jayapura on Monday, blocking roads, damaging an airport and torching government buildings.

The protests were triggered by the detention of Papuan students in the East Java city of Surabaya over accusations that they had disrespected the Indonesian flag in front of a dormitory during celebrations of Independence Day on Saturday.

Police fired tear gas into the dormitory before arresting 43 students, according to an activist, who said the students had been called "monkeys" during the operation.

On Tuesday, the situation was calmer in some areas, but Papua's deputy governor, Mohamad Lakotani, said by telephone that about 200 more police officers had been sent to Sorong from the island of Sulawesi amid continued tension.

Lakotani said a "significant number" of Papuans took to the streets in Sorong again after Monday's protests had seen the airport damaged, offices torched and a jail set ablaze.

About 400 protesters were on the streets of Sorong on Tuesday, its police chief, Mario P. Siregar, told news portal Detik.com, while state news agency Antara said some streets were still being blocked by burning tyres.

Police was also hunting for more than 250 inmates who fled jail in Sorong that was set ablaze during Monday's unrest.

Protesters had attacked the jail among other buildings, said Ade Kusmanto, a spokesman for the director-general of correctional facilities at the Law and Human Rights ministry.

"After burning the regional government's office facilities, (protesters) headed to the prison and threw rocks, provoking inmates," said Kusmanto, adding that a prison warden had been injured in the unrest.

The official said 258 inmates had escaped, from among 547 held in the jail, but added that some had since been recaptured, without elaborating.

Internet bandwidth had also been intentionally slowed in some parts of Papua on Tuesday, mainly around Sorong, making it harder for people to send pictures and videos, a spokesman of the ministry of communication and information technology said.

Similar measures were taken on Monday "to prevent hoaxes from spreading widely", the ministry said in a statement.

Papuans were angry because of "the extremely racist words used by East Java people, the police and military," Papua Governor Lukas Enembe has said.

A separatist movement has simmered for decades in the resource-rich area of Papua, where there have been frequent complaints of rights abuses by Indonesian security forces.

Rights groups urged Indonesian police to act with restraint and investigate the accusations of racism and discrimination faced by Papuan students.

"Indonesian authorities must act promptly to de-escalate tensions in West Papua province and guarantee that people who wish to protest peacefully can continue to do so," Usman Hamid, the Indonesia executive director of rights group Amnesty International, said in a statement.