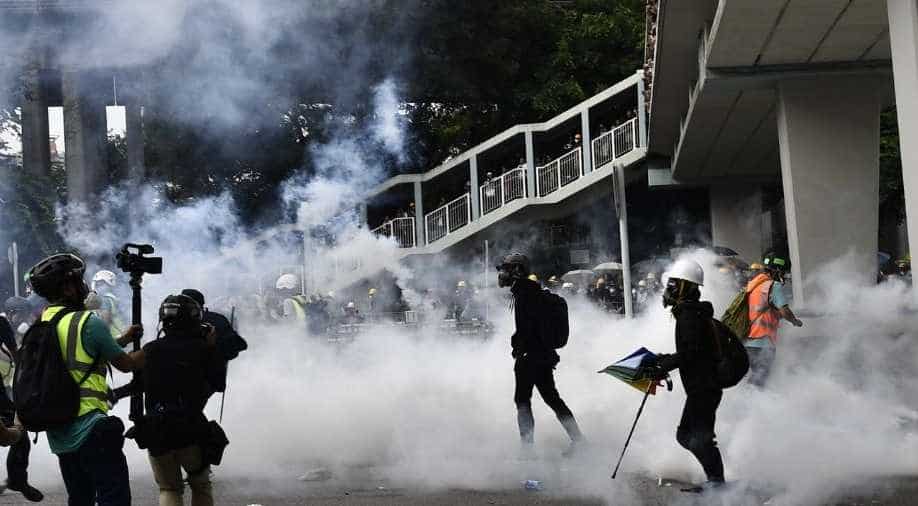 Defiant pro-democracy protesters in Hong Kong were readying for another big rally later Sunday, a day after police fired rubber bullets and tear gas in the latest violent confrontation that has plunged the financial hub deeper into crisis.

A town near the border with China descended into chaos on Saturday as police battled protesters holding a banned rally against suspected pro-government triad gangs who beat up democracy demonstrators there last weekend.

Rubber bullets were fired later in the clashes which ended when riot police baton-charged the last remaining demonstrators inside the town's metro station, leaving pools of blood in the same concourse where the suspected triads had attacked the previous weekend.

Police said 11 arrests were made. Hospital authorities said 24 people were injured, most of whom have been discharged but two remained in serious condition.

Saturday's violence compounds the political crisis engulfing the city's pro-Beijing leadership who are seemingly unable, or unwilling, to end the chaos.
A rally is planned on the main island on Sunday afternoon.

Police have given permission for a static protest in a park but have banned a proposed march through the city, ratcheting up the likelihood of renewed clashes.

Semi-autonomous Hong Kong has been plunged into its worst crisis in recent history after millions of demonstrators took to the streets and sporadic violent confrontations erupted between police and pockets of hardcore protesters.

The demonstrations over the last seven weeks were triggered by a controversial bill which would have allowed extraditions to mainland China, but have evolved into a call for wider democratic reforms and a halt to sliding freedoms.

Yet the weeks of unprecedented protests with huge turnouts -- as well as frequent clashes and the sacking of parliament -- have had little luck persuading Beijing or Hong Kong's leaders.

Beijing has issued increasingly shrill condemnations in the last two weeks, but has left it to the city's semi-autonomous government to deal with the situation.

Her administration has faced down weeks of public anger.

But the tensions ratcheted up after last week's attack by a pro-government mob in Yuen Long.

The town is in Hong Kong's rural New Territories where many of the surrounding villages are known for triad connections and their staunch support for the pro-Beijing establishment.