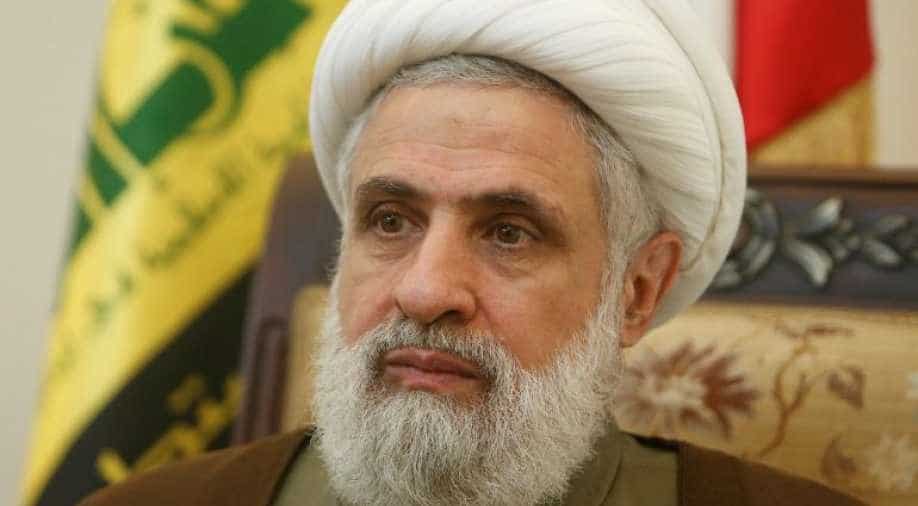 Lebanon's Hezbollah deputy leader Sheikh Naim Qassem is pictured during an interview with Reuters at his office in Beirut's suburbs, Lebanon. Photograph:( Reuters )

Sheikh Naim Qassem, in an interview with Lebanon's al-Joumhouria newspaper, said such a war would be fought on many fronts, not just one, meaning losses would be countless.

The Iran-backed Lebanese Shi'ite group Hezbollah believes a US war on Iran is unlikely and US President Donald Trump would not be able to control the results of a conflict that could engulf the region.

Sheikh Naim Qassem, in an interview with Lebanon's al-Joumhouria newspaper, said such a war would be fought on many fronts, not just one, meaning losses would be countless.

"At the regional level, we see as unlikely an American war against Iran for many reasons, the most important of them being first that Iran is a strong state with important defensive capabilities," Qassem said.

Trump "does not benefit from a war that he can start but whose results he cannot control and which might begin with Iran but may be accompanied by the region being set on fire", he said.

Hezbollah is a heavily armed group founded by Iran's Revolutionary Guards in 1982 that has fought more recently in regional conflicts including Syria and Iraq as part of a Tehran-backed alliance.

Qassem noted what he described as "the great accomplishments" of the alliance led by Iran over the last two decades in "Palestine, Syria, Iraq, Lebanon, Yemen and elsewhere".

The United States views Hezbollah as a terrorist group.

On Wednesday, Trump said any war between Iran and the United States would be swift, but reiterated his desire to avoid a military confrontation even while blasting Tehran’s leaders.

The United States has imposed crippling financial sanctions against Iran since last year when Trump withdrew from a 2015 deal between Tehran and world powers under which Iran curbed its nuclear programme.

Tension has escalated sharply since last month when the Trump administration tightened its sanctions noose, ordering all countries to halt purchases of Iranian oil.