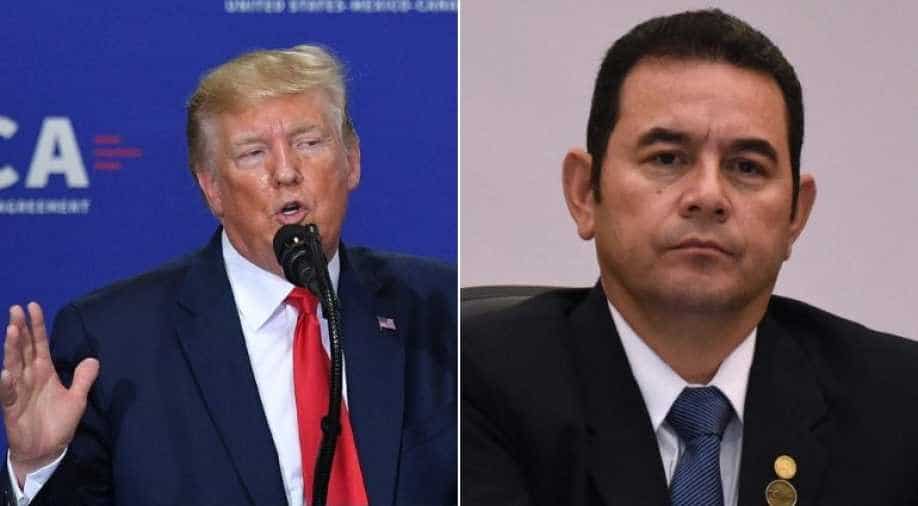 The meeting scheduled for Monday in Washington has been pushed back over 'speculation' about the signing of a possible deal, the Guatemalan government said in a statement.

Guatemalan President Jimmy Morales, who is under pressure at home not to seal a migration deal with the United States, on Sunday called off White House talks with Donald Trump with just a day to spare, his office announced.

The meeting scheduled for Monday in Washington has been pushed back over "speculation" about the signing of a possible deal, the Guatemalan government said in a statement.

Such a deal would make Guatemala a "safe third country" -- and mean that it would be obliged to offer asylum to any migrants entering its territory on the way to the United States.

Many migrants from Honduras and El Salvador cross Guatemala to reach Mexico on their route to the US border.

The Guatemalan government had announced Morales' visit last week, saying it would touch on immigration and security issues, but never offered details about what Trump and Morales would discuss.

Guatemalan officials did acknowledge that talks on a "safe third country" agreement were underway, leading to swirling speculation.

Those opposed to such a deal say they don't want Guatemala to become a dumping ground for migrants heading to the United States, especially given that Guatemalans are often part of the group making the journey.

The country's constitutional court was expected on Sunday to consider three legal challenges over the deal, which has been rejected by the two candidates vying for Guatemala's presidency next month.

Centre-left former first lady Sandra Torres will face off against conservative candidate Alejandro Giammattei on August 11 for the right to succeed Morales in January.

In March, Trump's administration suspended aid to the "Northern Triangle" countries of Guatemala, El Salvador and Honduras after the Republican leader said they were doing nothing to stem the flow of migrants to the US.