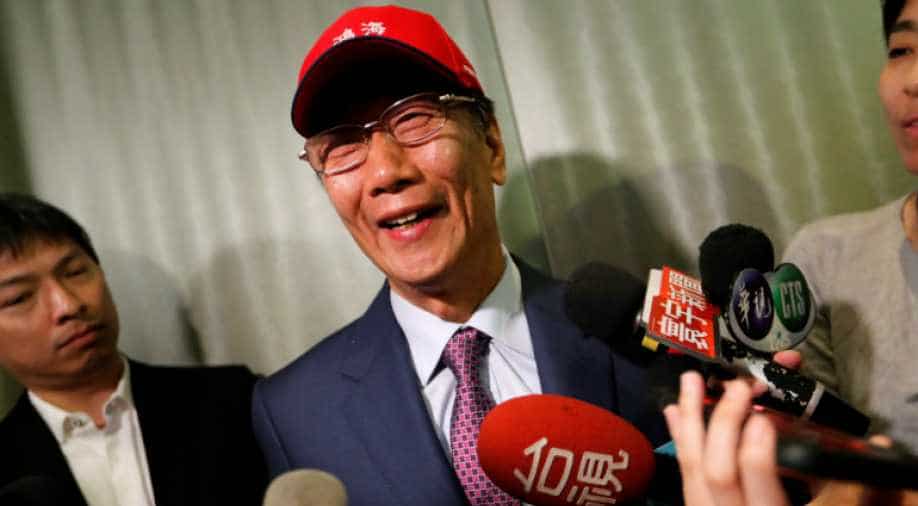 Terry Gou, founder and chairman of Foxconn, attends an event that marks the 40th anniversary of the Taiwan Relations Act, in Taipei. Photograph:( Reuters )

Terry Gou, chairman of Apple supplier Foxconn, said on Wednesday he will contest Taiwan's 2020 presidential election, shaking up the political landscape at a time of heightened tension between the self-ruled island and Beijing.

Gou, Taiwan's richest person with a net worth of $7.6 billion according to Forbes, said he would join the already competitive race, and take part in the opposition, China-friendly Kuomintang (KMT) primaries.

His decision capped a flurry of news this week that began when Gou said on Monday he planned to step down from the world's largest contract manufacturer to pave the way for younger talent to move up the company's ranks.

He later announced he was considering a presidential bid and hinted he was close to a decision, and then told more than 100 people packed into a temple he would follow the instruction of a sea goddess who had told him to run for president.

The sea goddess Mazu is a popular deity in Taiwan and is believed to hold sway over one's safety and fortune.

He urged the party to rediscover its spirit, the honour of its members and the lost support of the youth, and to establish a fair and transparent system for the primary race.

The KMT's primary was already highly competitive, with contenders including a former KMT chairman, Eric Chu, and a former head of the island's parliament, Wang Jin-pyng.

The KMT has not agreed how the race should be run or how candidates will be decided.

Gou's bid, which requires KMT approval, comes at a delicate time for cross-strait relations and delivers a blow to the ruling pro-independence Democratic Progressive Party, which is struggling in opinion polls.

China-Taiwan relations have deteriorated since the island's president, Tsai Ing-wen, of the independence-leaning DPP, swept to power in 2016.

China suspects Tsai is pushing for the island's formal independence. That is a red line for China, which has never renounced the use of force to bring Taiwan under its control.

Tsai says she wants to maintain the status quo with China but will defend Taiwan's security and democracy.

A senior adviser to Tsai said Gou's bid could create problems, given his extensive business ties with China.

"This is problematic to Taiwan's national security," the adviser, Yao Chia-wen, said.

"He's very pro-China and he represents the class of the wealthy people. Will that gain support from Taiwanese?" Yao said, adding he believed Gou would face a tough battle in the KMT primary.

Tension between Taipei and Beijing escalated again on Monday, as Chinese bombers and warships conducted drills around the island, prompting Taiwan to scramble jets and ships to monitor the Chinese forces.

A senior US official denounced Beijing's military manoeuvres as "coercion" and a threat to stability in the region.

Gou has questioned Taiwan's ties with the United States and said this week the island should stop buying US weapons. He said peace was the best the defence.

William Stanton, professor at National Taiwan University and former head of the de facto US embassy in Taipei, said he would have concerns if Gou were to become president.

"I’d be concerned about how he would behave. He did not have a positive attitude towards the US," Stanton said.

The KMT, which once ruled China before fleeing to Taiwan at the end of a civil war with the Communists in 1949, said in February it could sign a peace treaty with Beijing if it won the presidential election.

Zhang Baohui, a regional security analyst at Hong Kong's Lingnan University, said Gou's run could mark the start of the most unusual election in Taiwan history.

"This is something entirely fresh for Taiwan politics - here is a candidate who sees everything through the pragmatic angle of a businessman rather than raw politics or ideology," Zhang said.

"He has no baggage and that will be a fascinating scenario."

Gou's news comes as Tsai is grappling with a series of unpopular domestic reform initiatives, from a pension scheme to labour law, which have come under intense voter scrutiny.

The KMT said this week Gou had been a party member for more than 50 years and had given it an interest-free loan of T$45 million ($1.5 million) in 2016 under the name of his mother, which had signalled his loyalty to the party.

Foxconn said on Tuesday Gou would remain chairman, though he planned to withdraw from daily operations.

It was not immediately clear when he planned to pull back or if his presidential bid would require him to step down from Foxconn. There were no regulations related to a company executive running for the presidency, the island's stock exchange said.

Foxconn's shares closed up 2.1 percent at T$91.80 ahead of Gou's formal declaration, the highest in six months. His Hong Kong-listed FIH Mobile closed up 28 percent, tracking the strength in parent Foxconn.