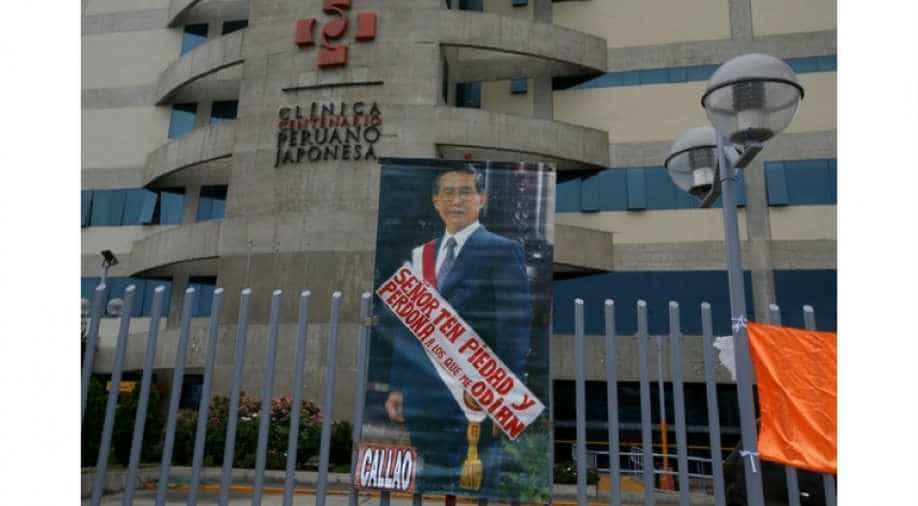 He was transferred from prison to a hospital on Saturday after suffering from low blood pressure and an irregular heartbeat, the latest in a string of hospitalizations. Photograph:( Reuters )

"I am aware that the results of my government were well received on one side, but I admit that I have let down other compatriots, and I ask them to forgive me with all my heart," Fujimori said in a Facebook video filmed from his hospital bed.

The 79-year-old had been serving a 25-year sentence for corruption and human rights abuses committed during his time in office from 1990 to 2000.

He was transferred from prison to a hospital on Saturday after suffering from low blood pressure and an irregular heartbeat, the latest in a string of hospitalizations.

President Pedro Pablo Kuczynski ordered the pardon of Fujimori and seven other prisoners Sunday on humanitarian grounds, placing himself in the middle of a political crisis just days after he avoided impeachment.

On Monday Peruvian police fired tear gas and clashed with protesters marching against the pardon.

They called for the departure from office of Kuczynski, who later defended his decision in a televised message to the nation.

"I am convinced that those of us who feel democratic should not allow Alberto Fujimori to die in prison, because justice is not revenge," Kuczynski said in his address Monday night.

"It is about the health and chances of life of a former president of Peru who, having committed excesses and grave errors, was sentenced and has already completed 12 years" in prison, he said.

Anti-riot police moved through the streets of Lima on Monday to prevent demonstrators from heading to the clinic where Fujimori is hospitalized, firing tear gas canisters and erecting barricades to disperse them.

"Out, out PPK! Out, out PPK!" demonstrators chanted in reference to the current president, who had promised during his electoral campaign the previous year that he would not free Fujimori.

"Fujimori, murderer and thief. No to the pardon!" read one of the signs held by the protesters, some of whom also carried a giant Peruvian flag.
Relatives of victims of Fujimori`s brutal rule took part in the march.

"We are here as relatives to reject this illegal pardon because it does not correspond to the gravity of the crimes," Gisella Ortiz, representative of a group of families of victims, told reporters.

Kuczynski had earlier said his decision to grant the pardon relied on a medical evaluation that Fujimori suffered a progressive and incurable illness and that conditions in prison "represent a grave risk to his life."

But the move came after Fujimori's son Kenji drained votes away from a parliamentary bid Thursday to impeach Kuczynski on suspicion of corruption, sparking speculation the pardon was political.