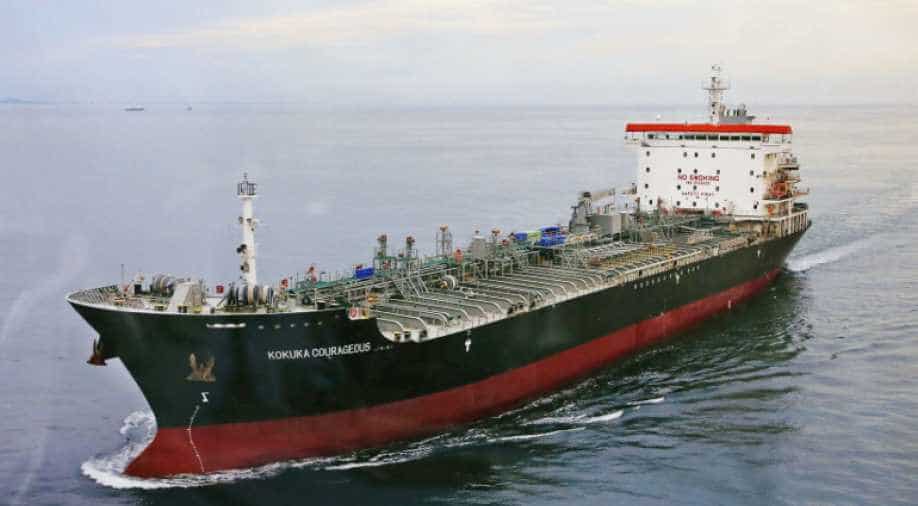 A picture of the Kokuka Courageous, one of two tankers that were hit in suspected attacks in the Gulf of Oman. Photograph:( Reuters )

'The crew told us something came flying at the ship, and they found a hole,' Kokuka President Yutaka Katada said. 'Then some crew witnessed the second shot.'

Two "flying objects" damaged a Japanese tanker owned by Kokuka Sangyo Co in an attack on Thursday in the Gulf of Oman, but there was no damage to the cargo of methanol, the company president said on Friday.

The Kokuka Courageous is now sailing toward the port of Khor Fakkan in the United Arab Emirates, with the crew having returned to the ship after evacuating because of the incident, Kokuka President Yutaka Katada told a press conference. It was being escorted by the US Navy, he said.

"The crew told us something came flying at the ship, and they found a hole," Katada said. "Then some crew witnessed the second shot."

Katada said there was no possibility that the ship, carrying 25,000 tons of methanol, was hit by a torpedo.

The United States has blamed Iran for attacking the Kokuka Courageous and another tanker, the Norwegian-owned Front Altair, on Thursday, but Tehran has denied the allegations.

Katada said he did not believe Kokuka Courageous was targeted because it was owned by a Japanese firm. The tanker is registered in Panama and was flying a Panamanian flag, he said.

"Unless very carefully examined, it would be hard to tell the tanker was operated or owned by Japanese," he said.

The tanker was attacked near the Strait of Hormuz, a major strategic waterway through which about one-fifth of global oil consumption passes on its way from Middle Eastern producers including Saudi Arabia, Iraq, the UAE and Kuwait as well as Iran.

"This strait is very crucial. Without this route we can not transport gasoline and heavy oil to Japan," Katada said.

"Unless another major incident occurs, as long as we get approval from our crew, we will continue operating our tankers via this route to Saudi Arabia."

Japanese Industry Minister Hiroshige Seko said on Friday that the incidents will be discussed at a meeting of G20 energy and environment ministers this weekend.

Seko declined to comment on American officials blaming Iran, saying Japan is still investigating the incident, which occurred while Japanese Prime Minister Shinzo Abe was in Tehran trying to help ease rising tensions between the United States and Iran.