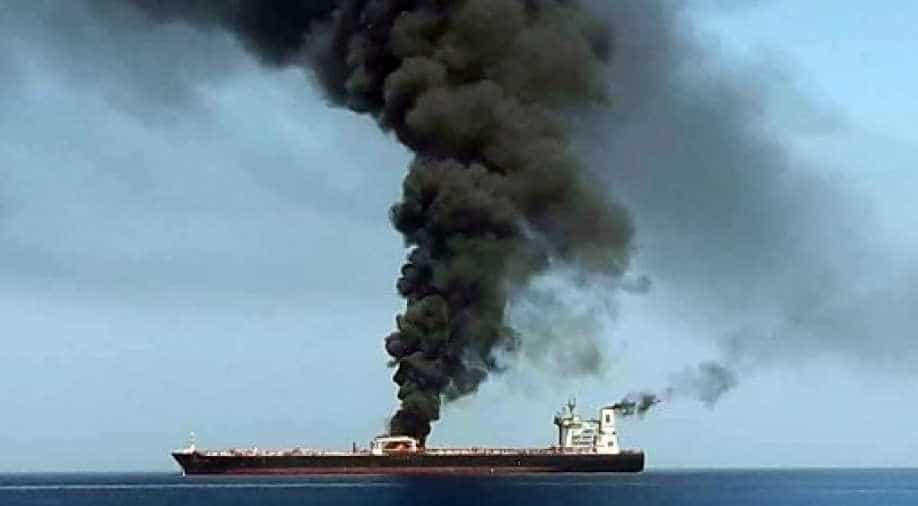 Smoke billowing from a tanker said to have been attacked off the coast of Oman, at undisclosed location. Photograph:( AFP )

US naval forces in the region received two separate distress calls at 6:12 am. local time and a second one at 7:00 am, the Fifth Fleet said.

The US Fifth Fleet said on Thursday that its vessels in the Middle East have received distress calls from two tankers in the Gulf of Oman.

"We are aware of the reported attack on tankers in the Gulf of Oman," said a statement from the Fifth Fleet, based in Bahrain.

"US naval forces in the region received two separate distress calls at 6:12 am. local time and a second one at 7:00 am," the statement said.

"US Navy ships are in the area and are rendering assistance," it added.

"Forty-four sailors from the two foreign oil tankers which had an accident this morning in the Sea of Oman were saved from the water by the (navy) rescue unit of Hormozgan province and transferred to the port of Bandar-e-Jask," IRNA quoted an "informed source" as saying.

"UK and its partners are currently investigating," the United Kingdom Marine Trade Operations (UKMTO) said on its website, without giving further details.

Oil prices spiked by about three per cent on Thursday after reports of an "attack" on two oil tankers in the Gulf of Oman.