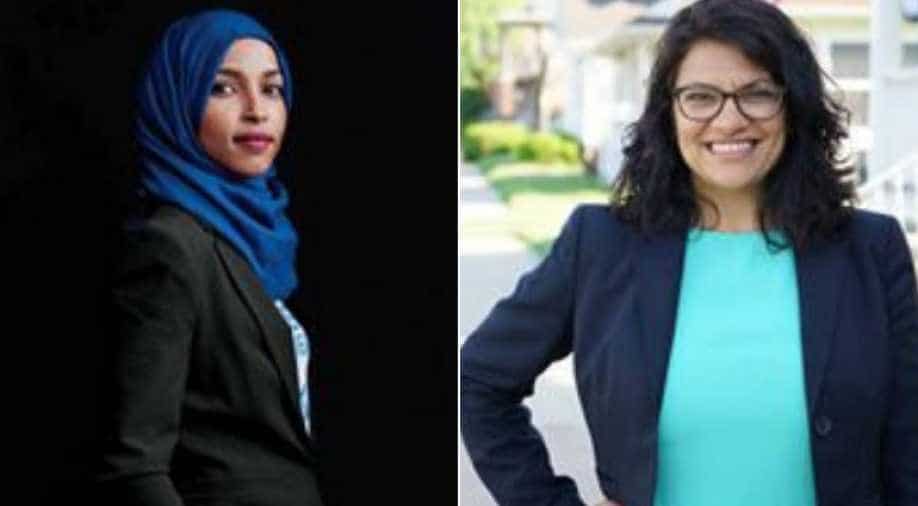 Ilhan Omar is a one-time Somali refugee, Rashida Tlaib's parents migrated to the US from Palestine.

A one-time Somali refugee and the daughter of Palestinian immigrants shared the historic distinction Tuesday of becoming the first two Muslim women elected to the US Congress.

Both women - Ilhan Omar, 37, and Rashida Tlaib, 42 - are Democrats from the Midwest and outspoken advocates of minority communities that have found themselves in the sights of US President Donald Trump's anti-immigrant policies.

Omar won a House seat in a strongly Democratic district in Minneapolis, Minnesota, succeeding Keith Ellison who was himself the first Muslim ever elected to Congress.

Tlaib's victory was no suprise. She ran unopposed in a congressional district that stretches from Detroit to Dearborn, Michigan.

Their stories trace a similar trail-blazing rise through local politics.

"I'm Muslim and black," the hijab-wearing Omar said in a recent magazine interview.

"I decided to run because I was one of many people I knew who really wanted to demonstrate what representative democracies are supposed to be," she said.

Omar fled Somalia's civil war with her parents at the age of eight and spent four years at a refugee camp in Kenya.

Her family settled in Minnesota in 1997, where there is a sizable Somali population.

She won a seat in the state's legislature in 2016, becoming the first Somali-American lawmaker in the country.

Before that, she had worked as a community organizer, a policy wonk for city leaders in Minneapolis, and as a leader in her local chapter of the NAACP - the African-American civil rights group.

She decided to run for Congress after Ellison, who is also black, decided to give up his seat after 12 years in Congress to run for attorney general of Minnesota.

Omar has forged a progressive political identity. She supports free college education, housing for all, and criminal justice reform.

Rashida Tlaib is the Detroit-born daughter of Palestinian immigrants - the eldest of 14 children.

A fighter who once heckled US President Donald Trump during a 2016 campaign stop in Detroit, she says she didn't run to make history as Muslim.

"I ran because of injustices and because of my boys, who are questioning their (Muslim) identity and whether they belong," Tlaib said in an US television interview in August.

"I've never been one to stand on the sidelines."

Like Omar, she blazed a trail through Michigan politics, becoming the first Muslim woman to serve in the Michigan state legislature in 2008.

In August, she emerged as the winner of a Democratic primary for a seat vacated by John Conyers, a longtime liberal lion who stepped down in December amid sexual harassment allegations and failing health.

With no Republican challenger in the race, Tlaib's election on Tuesday became a formality.

The seat she won is in a predominantly African American congressional district with few Muslim voters.

She says her constituents were attracted to her progressive politics, which are the polar opposite of Republicans.

She also has been mindful of the historic nature of her candidacy.

During her tearful primary election victory speech in August, with her immigrant mother by her side, she said relatives in the West Bank were watching her success.

"It just shows how incredibly wonderful our country can be," she said.