Fidel's greatest contribution was surviving as symbol of anti-imperialism 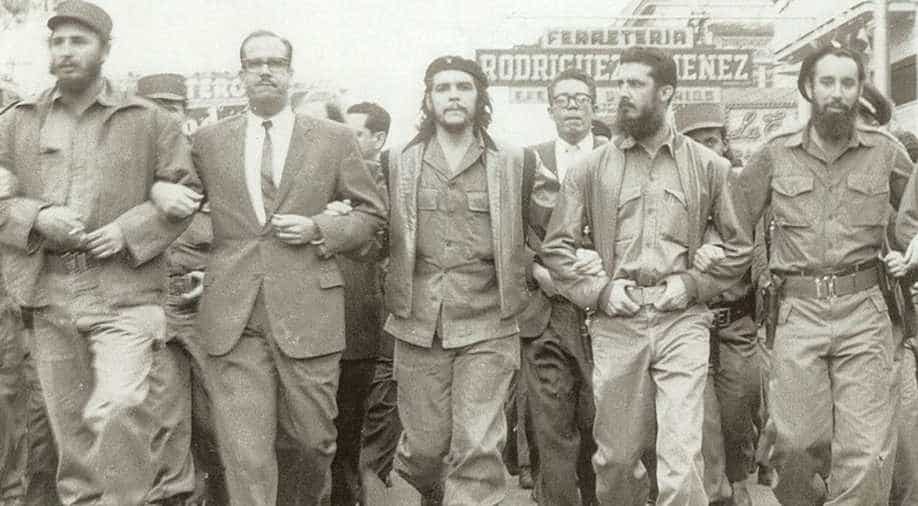 Challenging the Imperium: March 5, 1960, Fidel Castro hand-in-hand with other Cuban revolutionaries, including Che Guevara Photograph:( Others )

Beginning with the first voyage of Christopher Columbus in 1492, Spain laid claim to most of the New World, eventually consolidating its rule over much of South, Central, and North America. In the early 19th century, Mexico, Central America and South America acquired independence, leaving Cuba and Puerto Rico as the last of the Spanish colonies in the Americas. They remained Spanish colonies until the United States declared war in 1898. The U.S. victory over Spain made Puerto Rico a U.S. colony to date.

The U.S. military occupied Cuba until 1902, only leaving after the Platt Amendment allowed the U.S. to intervene when its interests were threatened. The U.S. reoccupied Cuba 1906-1909 and in 1912 to suppress Afro-Cuban protests against racial discrimination. America owned most of the production of Cuba’s chief export, sugar, most of which was exported to the United States. Supported by the U.S., General Fulgencio Batista came to power in 1940 as president, then in 1952 through a military coup d’etat in which he established himself as a U.S. supported dictator with close ties to the mafia.

Castro supported the Salvador Allende government in Chile which the CIA, under Richard Nixon and Henry Kissinger, set out to destroy

Fidel Castro Ruz was born in 1926, son of a somewhat wealthy Spanish (Galicia) immigrant and owner of a prosperous sugar plantation. As a young man, he studied at a Jesuit-run school, after which his father sent him to the University of Havana to study law, where he became radicalised. In 1948 he travelled to Bogota, Colombia, where he got caught up in the riots protesting the assassination of popular leftist, Jorge Gaitán.

Fidel began considering himself a revolutionary socialist, and after recruiting a rebel band among the poor in Santiago, on July 26, 1953, he led an attack on the Moncada army barracks, in an attempt to begin to topple the Batista dictatorship. The revolt failed and he was released from prison in 1955, and he and his brother Raul fled to Mexico, where they met the Argentine doctor and Marxist revolutionary Ernesto Che Guevara. Together the three planned a trip to Cuba to establish a guerrilla resistance to the Batista dictatorship.

With 81 revolutionaries, they left Mexico on the old yacht, Granma, on November 25, 1956, for the 1,200 mile trip to Cuba. The journey was difficult and they encountered resistance when they landed. Only 19 of them made it alive to the Sierra Maestra, where they began the guerrilla warfare that would lead to the defeat of the Batista regime, which fell on December 1, 1959. Consequently, Batista fled the country with $300,000,000 from the national treasury.

In early 1960, U.S. President Eisenhower, an antagonist to leftist governments in Latin America, authorised the Central Intelligence Agency to carry out operations to overthrow Castro. This led to the U.S. supported Bay of Pigs invasion in April 1961, which the Cubans defeated. What followed was the U.S. embargo of Cuba and persistent attempts by the United States to overthrow and/or assassinate Castro.

The tacit war with the U.S. forced Castro to ally with the Soviet Union, which at that time had no interest in pursuing popular revolutions around the world. Nonetheless, Castro was dependent on the Soviet Union for support. In 1962, Castro allowed the Soviets to install nuclear missiles in Cuba, in retaliation for the ring of missiles that the U.S. maintained surrounding the Soviet Union. This led to the Cuban missile crisis and a further hardening of relations between Cuba and the United States, and an increased dependency of Cuba on the Soviet Union.

The author is a proud co-author of the Cuban President, Fidel Castro (Others)

Abroad, however, Castro supported anti-imperialist revolutions whenever he could, in Chile, Nicaragua, and Grenada in Latin America, and in Africa, particularly in Angola and Mozambique.

Eventually, age forced him to step down from the government, leaving the Cuban Communist Party in power.

Fidel Castro was a major figure of the 20th century who uniquely challenged American hegemony in Latin America, and later, in the world. Any evaluation of him must contain some personal views of that hegemony. As I mentioned, Castro supported the Salvador Allende government in Chile, which the CIA, under Richard Nixon and Henry Kissinger, set out to destroy, plotting with General Augusto Pinochet to carry out a military coup to overthrow the government. I was in Santiago, Chile when the coup took place, and along with thousands of others, was picked up by the army and tortured. As an American, though, I was released and could escape to the United States, but not without realising the brutality of U.S. imperial designs in Latin America, that same brutality that led Castro to depose Fulgencio Batistas.

Some time later, Belgian scholar put together a volume, Schuldenkrisse, on the then Latin American debt crisis, with chapters by Ernest Mandel, Winfred Wolf, me, and Fidel Castro, so I belatedly became co-author of the Cuban president.

Castro, in my opinion, could have led a life of ease based on family wealth, but instead courageously chose to challenge U.S. imperialism. Once successful, he found himself trapped between the constant attacks, assassination attempts, embargoes, invasions, on the one hand, and his necessary ties to the Stalinist Soviet Union, his only means of survival but with a cost in terms of foreign and domestic policy. Cuba’s position as a tiny island dependent on sugar exports, trying to survive in a hostile and difficult world market, limited what his “socialist” revolution could accomplish. Unlike Allende and other leftists, he survived as a symbol that imperialism was not invincible, perhaps his greatest contribution.