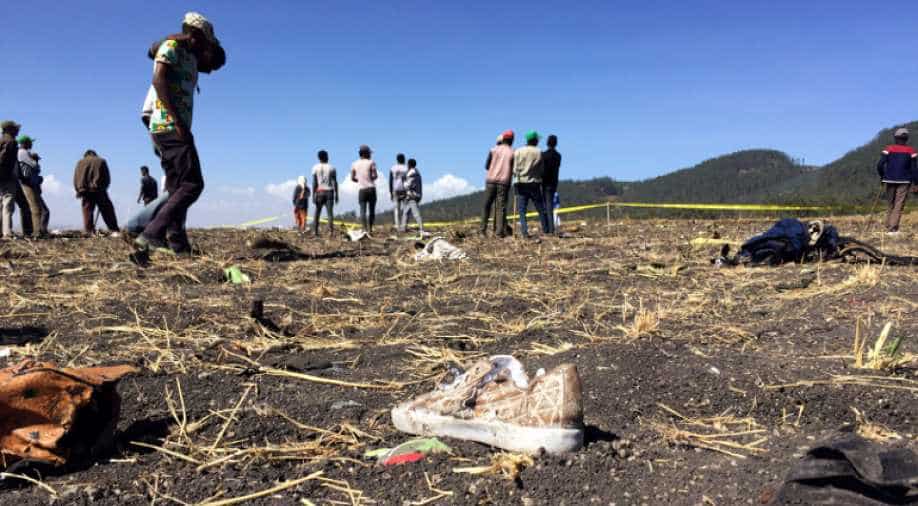 The Nairobi-bound plane -- the same type as the Indonesian Lion Air jet that crashed in October, killing 189 passengers and crew -- smashed into a field just six minutes after takeoff as the pilot alerted controllers of 'difficulties'.

Airlines in Ethiopia, China and Indonesia grounded Boeing 737 MAX 8 jets Monday as investigators recovered the black boxes from a brand-new passenger jet that crashed outside Addis Ababa a day earlier, killing all 157 people on board.

The Nairobi-bound plane -- the same type as the Indonesian Lion Air jet that crashed in October, killing 189 passengers and crew -- smashed into a field just six minutes after takeoff as the pilot alerted controllers of "difficulties".

Hopes were raised Monday of finding answers for the deaths of people from 35 countries, including two dozen UN staff, that prompted Ethiopia to declare a day of mourning.

"After tedious search by the rescue and investigation team... Ethiopian Airlines announces that the Digital Flight Data Recorder (DFDR) and Cockpit Voice Recorder (CVR) of ET302 have been recovered," the state-owned carrier said in a statement, using the flight number.

The airline, Africa's largest, added it had grounded its fleet of six remaining Boeing 737 MAX 8 planes pending information "assumed to be found from the black box data."

This followed on the heels of China, which ordered domestic airlines to suspend the commercial operation of the Boeing 737 MAX 8. There were eight Chinese nationals among the 149 passengers and eight crew on board the ill-fated flight.

Indonesia, which has 11 of the planes, said it would "carry out inspections and temporarily prohibit Boeing 737 Max 8 from flying."

Boeing has described the MAX series as its fastest-selling airplane ever, with more than 5,000 orders placed to date from about 100 customers.

State-owned Ethiopian Airlines had ordered 30 MAX 8 jets in total, and China has received 76 from an order of 180.

The plane that crashed Sunday was less than four months old. It had been delivered on November 15, Ethiopian Airlines said.

The jet fell near the village of Tulu Fara, some 60 kilometres (40 miles) east of Addis Ababa.

Witness Tegegn Dechasa told AFP "the plane was already on fire when it crashed to the ground. The crash caused a big explosion."

Another, farmer Sisay Gemechu, said: "The plane seemed to be aiming to land at a nearby level open field, but crashed before reaching there."

As inhabitants of the remote part of Ethiopia looked on from behind a security cordon, inspectors pursued their search for plane debris, passenger belongings and human remains Monday.

The single-aisle Boeing left a deep, black crater at the impact site, which was being dug up with a mechanical excavator.

As Ethiopia prepared to receive loved ones seeking victims' remains and belongings, a UN gathering in Nairobi opened under a shadow.

At least 22 staff from different UN agencies were on the flight, many headed for an annual assembly of the UN Environment Programme.

Delegates arrived with the UN flag flying at half-mast, hugging and comforting one another as they wondered who among the staff may have been on the plane.

Nairobi hosts the global headquarters of UNEP and UN-Habitat, and is the regional seat of other UN agencies.

"Let us reflect that our colleagues were willing to travel and to work far from their homes and loved ones to make the world a better place to live," UN-Habitat head Maimunah Sharif told some of those gathered.

Pope Francis added his voice Monday to the global outpouring of condolences from the UN, Western and African leaders, offering "prayers".

Ethiopian Airlines said the pilot was given clearance to turn around after flagging difficulties to airport authorities before the plane disappeared from radar.

Carrier flydubai said Monday it would not ground its MAX 8 Boeings, with a spokesperson saying: "We remain confident in the airworthiness of our fleet."

South Korea said it had sent a team of four inspectors to a low-budget airliner, Eastar Jet, that runs two B737 MAX 8 planes, and Royal Air Maroc said its sole MAX 8 was undergoing maintenance.

A committee comprising Ethiopian Airlines, Ethiopian Civil Aviation Authority and Ethiopian Transport Authority was set up to led the investigation, in which American experts will also take part.

Details of the passengers, including tourists, business travellers and humanitarians, have started to emerge.

Among them was Cedric Asiavugwa, a Kenyan third-year student at Georgetown University Law School in Washington, visiting home ahead of his graduation in the spring, he university said.

Kenya had the highest death toll with 32, according to the airline.

Canada followed with 18 victims, including Nigerian-born author Pius Adesanmi, who directed the Institute of African Studies at Carleton University.

Nine Ethiopians were among the victims, with eight each from Italy and the United States. The airline said Britain and France each had seven people on board, Egypt six, and Germany five.

France, however, put its death toll at nine.

Ethiopian Airlines CEO Tewolde GebreMariam said the plane had flown in from Johannesburg early Sunday, spent three hours in Addis and was "despatched with no remark", meaning no problems were flagged, before taking off again.