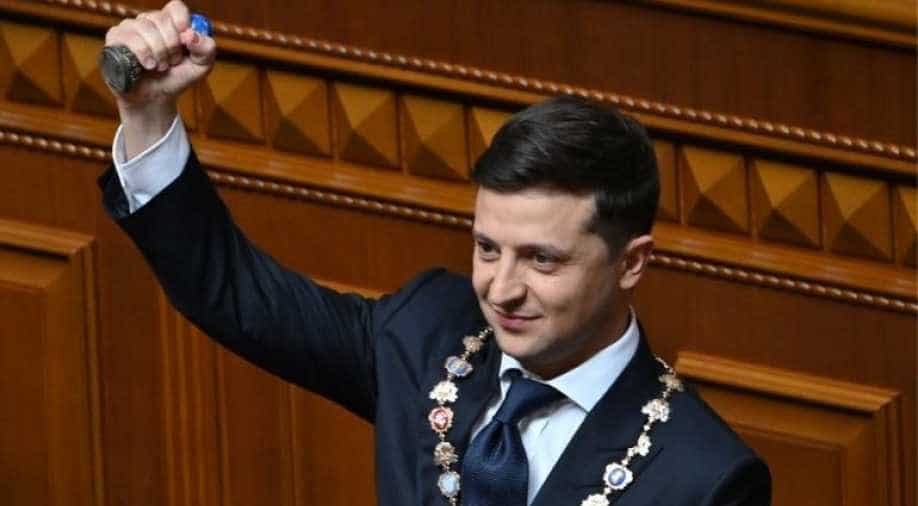 Macron praised the ambition of Zelensky, a former comic actor who stunned the world to win the presidency earlier this year, to end the five-year conflict.

French President Emmanuel Macron on Monday said it may be possible to hold new peace talks over the conflict in the east of Ukraine as he hosted new Ukrainian President Volodymyr Zelensky on his first official visit to France.

Macron praised the ambition of Zelensky, a former comic actor who stunned the world to win the presidency earlier this year, to end the five-year conflict.

"There could be a summit under the Normandy format in Paris to take account of the progress that has been achieved," said Macron.

"There are new elements" after Zelensky came to power, said Macron, adding that any kind of meeting would have to be useful.

Zelensky said that his priority was the "end of the war and the return of the annexed Ukrainian territories" but this could not be achieved by military means.

"The only key to peace is diplomatic and sanctions pressure, so I ask you to keep it," he told Macron.

The Paris talks came after Zelensky met EU leaders in Brussels this month on his first foreign trip as Ukraine's leader, pressing Europe to step up pressure on Russia to end the war in his country's east.

Macron had hosted both Zelensky and former president Petro Poroshenko, whom he beat in the elections, for unusual separate talks on April 12 just ahead of their electoral run-off.

EU leaders have applauded the conduct of the election and peaceful transfer of power from Poroshenko.

But European capitals are also keeping a close eye on the first steps of Zelensky, a man with no previous political experience, whose fame comes from starring in a hugely popular TV series as a Ukrainian teacher who suddenly becomes president.

His Servant of the People party has the same name as the television series.

Since 2014, some 13,000 people have been killed in the war in the east between Ukrainian forces and Russian-backed separatists, which erupted after a popular uprising ousted Ukraine's pro-Kremlin president and Russia annexed Crimea.

Kiev and its Western backers accuse Russia of funnelling troops and arms across the border to fan the flames of the conflict. Moscow has denied the claims despite evidence to the contrary.