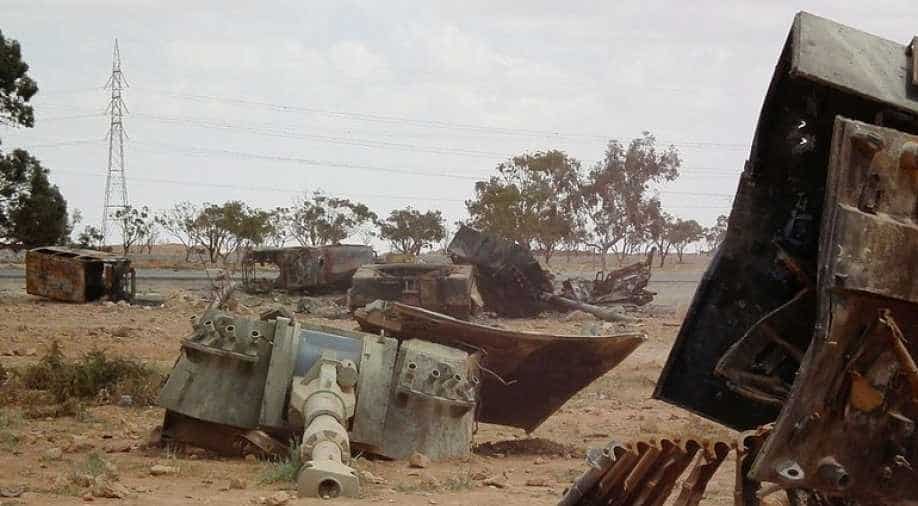 The two sides represent the main factions in a sporadic conflict between shifting alliances that have fought for power in Libya since 2014. (Representative image) (Image source: Wikimedia Commons) Photograph:( Others )

East Libyan forces have targeted rival brigades with a series of air strikes in the southern region of Jufra, officials and witnesses said on Sunday, three days after dozens of their men were killed in a surprise attack on an air base.

The escalation risks reigniting warfare in Libya's central desert regions, where forces aligned with the eastern-based Libyan National Army (LNA) have skirmished since late last year with opponents aligned with a UN-backed Government of National Accord (GNA) in Tripoli.

The two sides represent the main factions in a sporadic conflict between shifting alliances that have fought for power in Libya since 2014.

A resident in Jufra said LNA air strikes had caused casualties, though the number of dead and injured was unclear.

Details of Thursday's attack on Brak Al-Shati air base, about 150 miles (240 km) south of Jufra, are still emerging. It was led by the 13th Brigade, which operates under the GNA's defence minister. He was suspended on Friday pending an investigation.

The LNA says as many as 141 were killed, some of them summarily, and has pledged a forceful response. Medical and local officials said on Friday that at least 89 had died, but that the toll was incomplete.

Human Rights Watch cited a local hospital official as saying that five corpses had arrived at a local hospital with bound arms, and that six more were disfigured in a way that suggested their heads had been run over by a vehicle.

The HRW statement on Sunday also quoted an LNA soldier as saying some civilian workers were killed, and that he witnessed nine of his comrades being executed.

"As they were shooting they were shouting, 'You apostates, you enemies of God,'" the soldier was quoted as saying.

A spokesman for the 13th Brigade, also known as the Third Force, has said the raid on Brak Al-Shati base was a response to attacks against another air base that it controls to the south, and that those they attacked were armed.

"We carried out a rapid, surprise attack," the spokesman, Mohamed Gliwan, told Reuters by telephone. "The number of their dead was high because they were like sheep in a pen."

"We do not have casualties among our fighters because there was not a military confrontation ... They did not have time to fight back."

"He is particularly disturbed by the high number of fatalities as well as reports of summary executions of civilians, which, if confirmed, may constitute war crimes," spokesman Stephane Dujarric said in a statement.