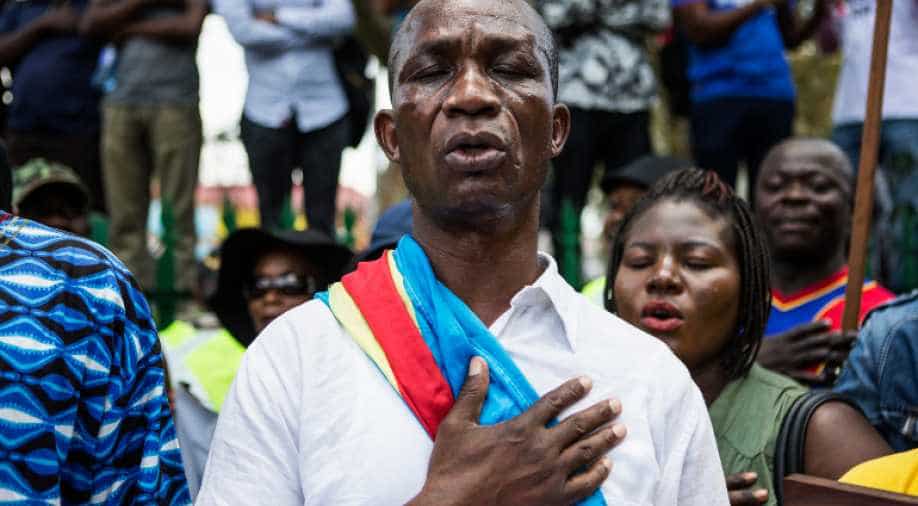 Demonstrators sing the national anthem of the Democratic Republic of Congo (DRC) during a march of Congolese nationals asking Congolese president to leave office in Yeoville district of Johannesburg on 18 January 2018. Photograph:( AFP )

Authorities in the Democratic Republic of Congo blocked the internet in Kinshasa and set up roadblocks throughout the city ahead of planned protests Sunday demanding that President Joseph Kabila leave power.

Catholic church leaders have called for a mass peaceful demonstration against Kabila's 17-year rule, three weeks after a similar protest on New Year's Eve that ended in deadly violence.

The authorities have banned all demonstrations, and at around midnight (2300 GMT Saturday), the internet, email and social media messaging networks were cut in the capital, AFP correspondents said.

The church has also called for rallies in several other cities including Lubumbashi and Goma, but the government has banned all demonstrations since September 2016, when anti-Kabila protests turned violent.

The head of the Muslim community in DR Congo has backed the church, urging the authorities to allow the march to take place despite no official permission being granted.

"I ask the authorities to avoid repressing the march," Cheikh Ali Mwinyi M'Kuu, legal representative of the Muslim community, told AFP on Saturday.

"If they decide to repress, there will be no peace. But if they let the march take place, they will respect the constitution and peace will prevail."

The previous anti-Kabila march, on December 31, descended into a bloody crackdown after police and security forces opened fire on demonstrators.

Protest organisers said 12 people were killed, while the United Nations reported at least five dead. The authorities said no deaths that day were linked to the demonstration.

The country's powerful Catholic Church, one of the few institutions to nationally enjoy broad credibility, condemned what it called "barbarism" and the UN and France sounded their concern over the death toll.

'Terrified for my children'

The church has been joined by a group of eight intellectuals in calling for the march to be peaceful.

The so-called "secular committee of coordination" has called on people to march after mass "with our peace branches, our bibles, our rosaries, our crucifixes, to save the Congo".

Arrest warrants have been issued against at least five members of the committee, a magistrate told AFP, prompting them to go into hiding.

"We're scared. I'm just like everyone else, I'm scared. I'm terrified for my children, who have been alone since December 28," said Kandolo, a member of the group in Kinshasa.

The committee has called for the release of political prisoners, to allow the return of exiled political opponents and, above all, a guarantee that Kabila will stand down and not seek a third term.

Kabila, 46, has been in power since 2001, at the helm of a regime widely criticised for corruption, repression and incompetence.

His constitutional term in office expired in December 2016, but he stayed on -- a move that stoked a bloody spiral of violence.

Under an agreement brokered by the Catholic Church, he was allowed to stay in office provided new elections were held in 2017.