US: Derailed Amtrak train was doing 80 mph in 30 mph zone 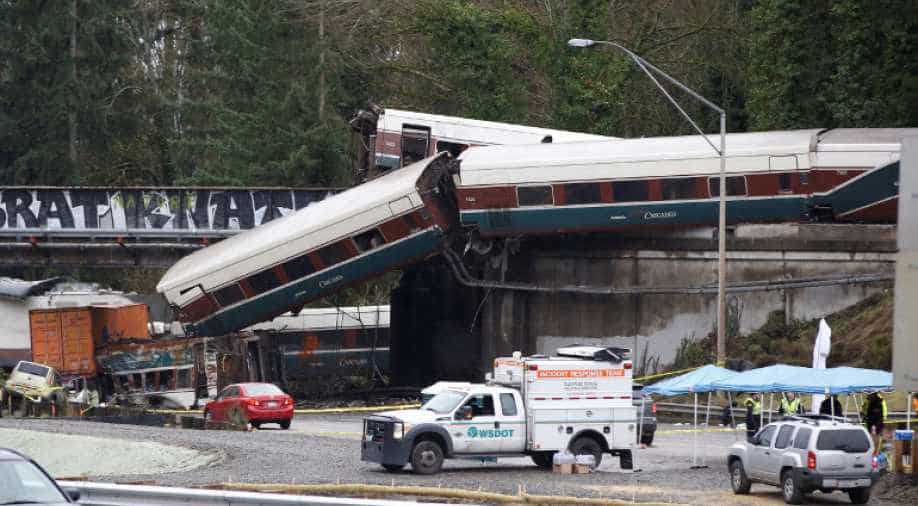 Pictures captured following Monday morning's derailment showed one Amtrak train car overturned and crushed on the interstate highway and others dangling from the overpass. Photograph:( Reuters )

The passenger train that derailed in Washington state was traveling 80 miles per hour in a 30 mph zone, transport investigators said late Monday.

Bella Dinh-Zarr, vice chairwoman of the National Transportation Safety Board, told journalists "it's too early to tell" why the train was travelling at such a fast speed, an estimate that came from preliminary information obtained from an event data recorder in the rear locomotive.

The Amtrak train -- which Dinh-Zarr said was likely carrying some 80 passengers, three crew and two service personnel -- was travelling on a new route for the first time before plunging off a bridge onto a busy highway, leaving at least three people dead.

Federal investigators would be on the scene for a full day Tuesday, she said, kicking off a probe into the incident that would likely last seven to 10 days.

Information obtained from the front locomotive's data recorder, which has been more difficult to access, would potentially lend more insight into the train's exact speed, according to Dinh-Zarr.

Pictures captured following Monday morning's derailment showed one Amtrak train car overturned and crushed on the interstate highway and others dangling from the overpass.

Several other carriages of the 14-car train also ended up on the highway, shutting down a key section of the busy artery that connects the greater Seattle metropolitan area to Olympia. All but one car jumped the tracks.

Officials gave no reason for the derailment of southbound Amtrak train 501, the inaugural run of a new service that promised faster connections between Seattle and Portland, Oregon.

Local officials had warned only weeks ago that the track still might not be safe enough to handle trains at higher speeds.