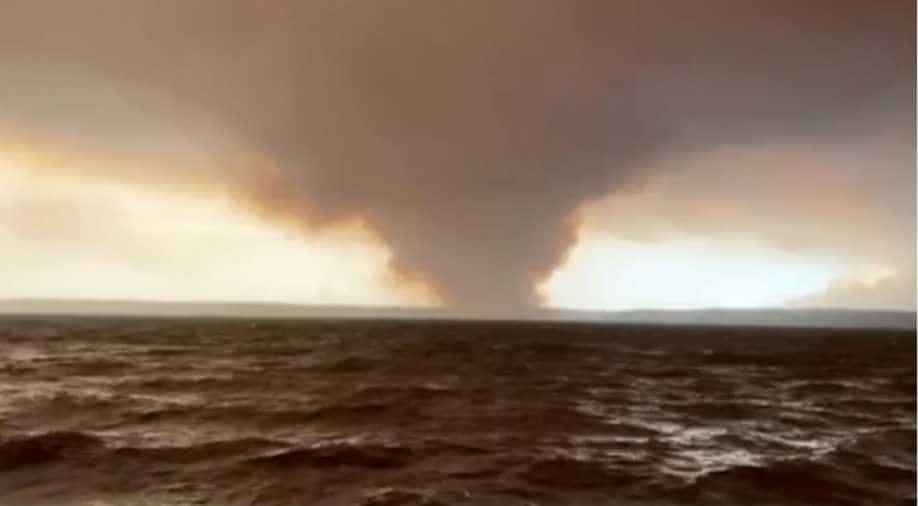 At least 15 people are now believed to have died, while scores of people remain missing

A third person was confirmed dead on Wednesday in devastating bushfires that engulfed Australia's southeast coast this week and a fourth was missing and feared dead, as navy ships rushed to provide supplies and assist with evacuations.

At least 15 people are now believed to have died, while scores of people remain missing after weeks of fires that have ripped through Australia's east coast, much of which is tinder-dry after three years of drought.

Bushfires have destroyed more than 4 million hectares (10 million acres) and new blazes are sparked almost daily by extremely hot and windy conditions and, most recently, dry lightning strikes created by the fires themselves.

Watch: What is causing bushfires in Australia?

Cooler conditions on Wednesday gave the country a moment to count the cost of the fires, although there were still more than 100 blazes in New South Wales (NSW) state alone and thousands of firefighters on the ground.

The body of a man was found in a burnt car early on Wednesday on the south coast of New South Wales after emergency workers began reaching the most damaged areas, and police said the death toll will rise.

"Sadly, we can report today that police have confirmed a further three deaths as a result of the fires on the South Coast," NSW Police Deputy Commissioner Gary Worboys told reporters in Sydney.

"Police are also at Lake Conjola now, where a house has been destroyed by fire and the occupant of that home is still unaccounted for."

NSW police did not identify the missing man but said he was 72 years old and authorities have been unable to reach his home.

Police said early assessments have found nearly 200 homes have been destroyed, though they cautioned it was an early estimate.

About 4,000 people in the town of Mallacoota in Victoria headed to the waterfront after the main road was cut off.

Mark Tregellas, a resident of Mallacoota who spent the night on a boat ramp, said only a late shift in the wind direction sparred lives.

"The fire just continued to grow and then the black started to descend. I couldn't see the hand in front in my face, and it then it started to glow red and we knew the fire was coming," Tregellas told Reuters.

"Ash started to fall from the air and then the embers started to come down. At that point, people started to bring their kids and families into the water. Thankfully, the wind changed and the fire moved away."

Thousands of Australians remain cut off as fires force the closure of major roads, leaving many struggling to secure supplies.

In Milton, a small town on the NSW south coast, locals queued for hours for the few remaining items left of shelves on supermarkets.

Emma Schirmer, who evacuated from her house in Batemans Bay with her three-month child on Tuesday, said the local shop was limiting sales to six items per customer, while a power outage meant shoppers could pay only with cash.

As shops run low and firefighters struggle with exhaustion, Australia's military, including Black Hawk helicopters, fixed-wing aircraft and naval vessels were being deployed.

Victoria's emergency management commissioner, Andrew Crisp, said the 176-metre-long HMAS Choules may be used to evacuate many of those stranded in Mallacoota, though with a capacity of 1,000 it will be insufficient alone.

HMAS Choules is due to arrive on Thursday.

NSW Premier Gladys Berejiklian said authorities were working to restore communications with areas cut off by the fires, though she warned conditions will deteriorate again over the weekend.

"Weather conditions on Saturday will be as bad as they were" on Tuesday, Berejiklian told reporters in Sydney.

The smoke has also drifted to New Zealand where it has turned the daytime sky orange across the South Island.