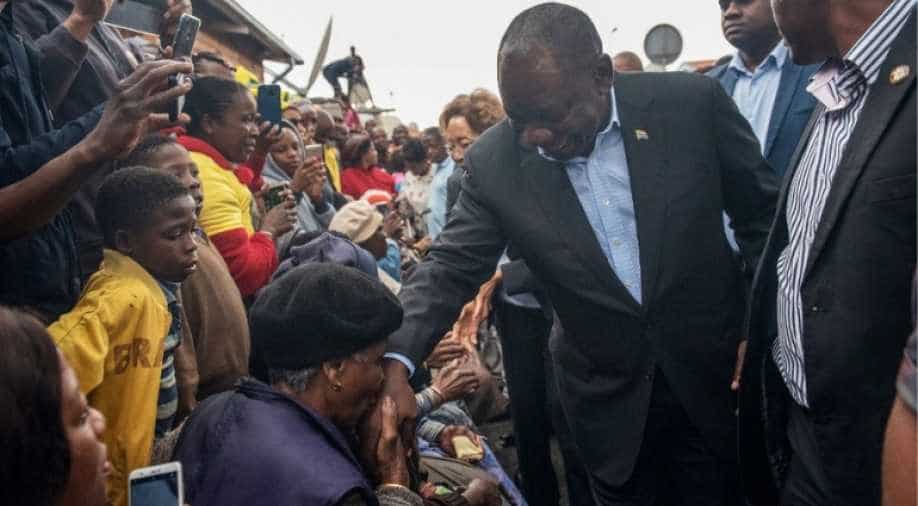 The results, published by the electoral commission, are the party's worst national showing since Nelson Mandela led it to victory in the first multi-racial polls after apartheid ended in 1994.

The results, published by the electoral commission, are the party's worst national showing since Nelson Mandela led it to victory in the first multi-racial polls after apartheid ended in 1994.

The African National Congress (ANC) held a comfortable lead with 57.73 per cent at 1615 GMT after 95 per cent of voting districts were officially tallied following Wednesday's vote.

That means they will be mathematically assured more than 50 per cent of votes cast in the final official tally, due to be announced Saturday.

Seats in parliament are allocated based on vote share and the party with the most representatives selects the president, who will be sworn in on May 25.

Results released by the Independent Electoral Commission (IEC) showed the ANC's closest rival, the main opposition Democratic Alliance (DA), trailing with a distant 20.65 per cent of the vote.

The Economic Freedom Fighters, founded six years ago by former ANC youth leader Julius Malema, was in third place with 10.51 per cent -- up to four percentage points on 2014.

"The ANC is being given a chance," said political analyst Lumkile Mondi. "This is an opportunity for them to reincarnate themselves."

"The ANC is never going to perform any better, it's a dying party, it continues shedding votes -- because it does not have economic management capability."

Ramaphosa has so far faced resistance to his reform agenda, especially from Zuma's allies who still occupy several high-ranking positions in the party and government.

After casting his ballot on Wednesday, Ramaphosa said the election was "heralding new dawn... a period of renewal, a period of hope".

The ANC's reputation was badly sullied under Zuma. Its support has fallen in every election since 2004 with the party taking 54 per cent in 2016 municipal elections, compared with 62 per cent in 2014's national vote.

Asked if Ramaphosa's favourable reputation had saved the ANC from defeat, party secretary-general Ace Magashule insisted "people have voted the ANC, they haven't voted for any person".

But Susan Booysen, a visiting professor at the Wits School of governance, said, "it is a lower percentage but it is way higher for the ANC than it would have been had Zuma been still in power".

The conservative and predominantly white Freedom Front Plus party, founded in 1994 during the negotiations to end apartheid, was performing unexpectedly well as the fifth-placed party in the vote. They were previously seventh.

The economy grew just 0.8 per cent in 2018 and unemployment hovers around 27 per cent -- soaring to over 50 per cent among young people.

"(We) liberated this country so we would have expected more," said ANC spokesman Dakota Legoete ahead of the latest results. "(But) in 2014 we did not have 48 parties... now we have 48 parties, 47 of them are competing for the jugular vein of the ANC."

About 26.8 million people were registered to vote but only around 65.6 per cent turned out.

Mandla Booi, 45, a voter in Port Elizabeth on the south coast, said, "the ANC has taken people for granted".

"There is some arrogance which has crept in."

The main opposition DA had sought to shed its image as a white, middle-class party with its first black leader, Mmusi Maimane, contesting his first general election since taking the helm in 2015.

"Even though we've lost some votes, we've held the centre -- and I will lead that project going forward," he told reporters at the results centre.

"It may not have happened this time, but come 2021, 2024 (elections) we can demonstrate... that we can hold South Africans together."

"In the next election there will not be any outright winner... so we are going to enter the era of coalitions before there's another big party that can emerge," said EFF chairman Dali Mpofu. "We are going into an era of political realignment."