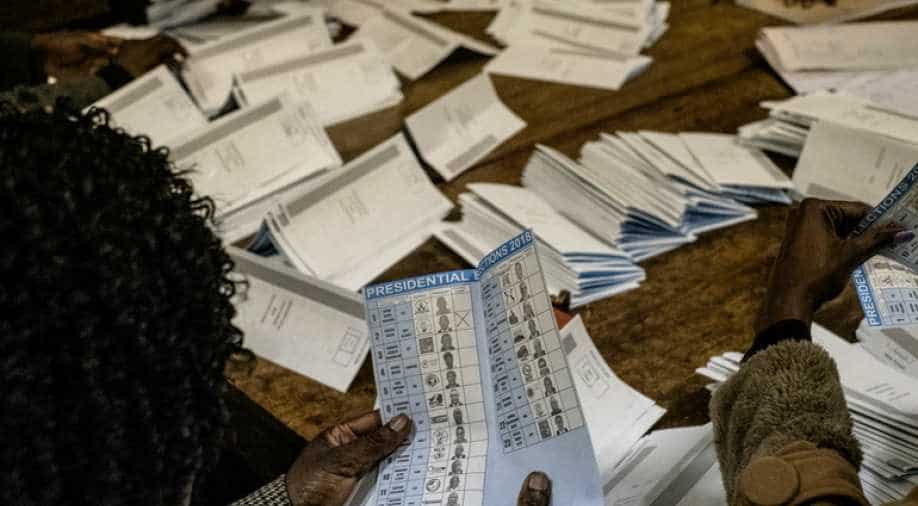 Counting was underway in Zimbabwe's first election since Robert Mugabe was ousted after 37 years in power as observers warned of possible shortcomings in Monday's landmark poll.

President Emmerson Mnangagwa, Mugabe's former right-hand man in the ruling ZANU-PF party, faced off against opposition leader Nelson Chamisa of the MDC (Movement for Democratic Change) in the historic vote.

"I am not shy to say I voted for Chamisa. He is young and can understand our plight as youth," said Ndumiso Nyoni, 20, a worker at a lodge in Lupane, southern Zimbabwe.

Officials overseeing the polls, in which a record number of candidates stood, said many polling stations had queues and estimated that average turnout was around 75 percent by 1600 GMT on Monday.

"It is our view that the high voter turnout is indicative of sound voter education and publicity," said Zimbabwe Electoral Commission (ZEC) chairwoman Priscilla Chigumba at a media briefing in Harare.

"There are shortcomings that we have to check. We don't know yet whether it was a pattern or whether it was a question of bad organisation in certain polling stations," the EU's chief observer Elmar Brok told AFP.

"Overall (there was) a huge amount of voting -- especially young people, mostly in a very good atmosphere, generally peaceful, which is positive."

With 5.6 million registered voters, the results of the presidential, parliamentary and local elections are due by August 4.

A run-off vote is scheduled for September 8 if no presidential candidate wins at least 50 per cent.

Former president Mugabe, 94, who was ousted by the military in November, voted at his customary polling station in Harare alongside his wife Grace. He had earlier staged a media conference on Sunday when he called for voters to reject ZANU-PF.

Mugabe, wearing a dark suit and red tie, was greeted with cheers after casting his ballot but did not answer journalists' questions about who he voted for.

Mnangagwa, who voted in his Kwekwe constituency in central Zimbabwe, said Mugabe had the right to express himself in the country's new "democratic space".

"Zimbabwe experienced a beautiful expression of freedom and democracy. In our millions, we voted in the spirit of tolerance, mutual respect and peace," Mnangagwa wrote on Twitter after the polls closed.

The party also has a majority in the lower house of parliament, which is up for election.

But Chamisa, a 40-year-old lawyer and pastor who has performed strongly on the campaign trail, hopes to tap into the youth vote.

"By the end of the day today we should be very clear as to an emphatic voice for change, the new, and the young -- I represent that," Chamisa said as he voted in Harare, surrounded by vocal supporters.

He again raised fraud allegations saying his victory would be assured if rigged ballots were excluded.

On Twitter, he alleged there was a "deliberate attempt to suppress" voting in urban areas -- MDC strongholds.

Zimbabwe's generals shocked the world last year when they seized control and ushered Mnangagwa into power after Mugabe allegedly groomed his wife to succeed him.

The election is Zimbabwe's first without Mugabe, who led ZANU-PF to power on independence from Britain in 1980 and clung to power for 37 years.

Elections under Mugabe were marred by systematic fraud and often deadly violence but campaigning ahead of Monday's vote was relatively unrestricted and peaceful.

A recent Afrobarometer survey of 2,400 people put Mnangagwa on 40 per cent and Chamisa on 37 per cent, with 20 per cent undecided.

'We cannot trust the inexperienced'

The UN High Commissioner for Human Rights warned of intimidation and threats of violence in the run-up to polling day, but said it was encouraged to see open rallies and peaceful demonstrations.

The new government will face mass unemployment and an economy shattered by the seizure of white-owned farms under Mugabe, the collapse of agriculture, hyperinflation and an investment exodus.

Previously solid health and education services are in ruins and millions have fled abroad.

Life expectancy has only recently recovered to its 1985 level of 61 years.

"While investors remain sceptical over whether Mugabe's former right-hand man has indeed turned over a new leaf, Mnangagwa's charm offensive with Western governments and businesses has at least given him a credible lifeline at the poll," said Verisk Maplecrodt analyst Charles Laurie in a note.

"We want these degrees we hold to be put to use and for our kids to appreciate the value of education... My main concern is the (electoral commission), it obviously has a preferred party," he said.

US to slap new sanctions on Russia for election interference, cyber attack: Sources