Colombia heads for divisive runoff with peace deal at stake 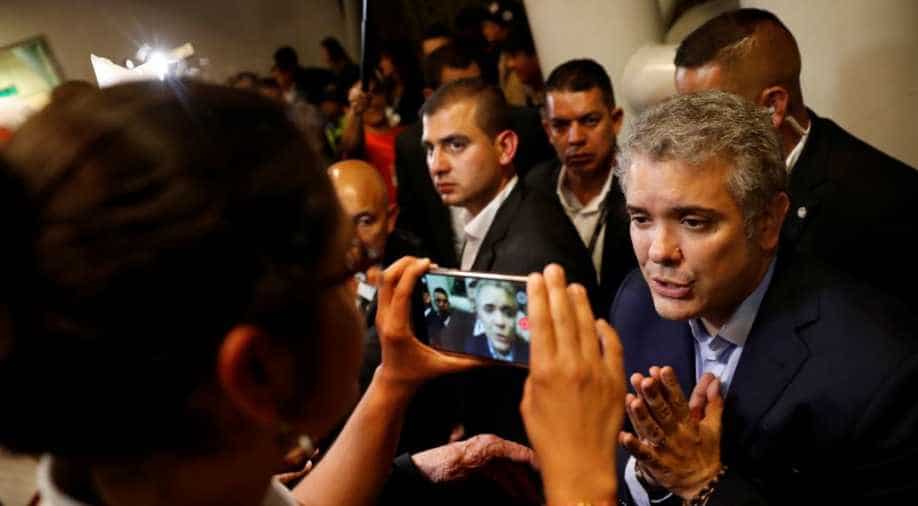 Colombia headed for its most divisive presidential race in decades after right-winger Ivan Duque won Sunday's first-round vote, triggering a runoff with leftist Gustavo Petro that could upset a historic peace deal or see a reversal in business-friendly policies.

It is the first time in Colombia's modern history that an openly leftist candidate has reached the second round of a presidential vote, a prospect that has unnerved some investors in Latin America's fourth-largest economy.

Duque, a 41-year-old former official of the Washington-based InterAmerican Development Bank, was the convincing winner of Sunday's ballot with 39 percent of votes, ahead of Petro, an outspoken ex-mayor of Bogota, with 25 percent, broadly in line with polls.

However, Duque's pledge to overhaul the 2016 peace deal with the Revolutionary Armed Forces of Colombia (FARC) by scrapping immunity for those convicted of crimes has alarmed many Colombians, weary after five decades of conflict that killed more than 200,000 people and left 7 million others displaced.

Though outgoing President Juan Manuel Santos won the Nobel Peace Prize for forging the accord, it has deeply divided the nation of around 50 million people. The deal was narrowly rejected in a referendum before Congress finally approved a modified version.

Petro, himself a former member of the now defunct M-19 rebel group, has backed the peace agreement, along with the three other losing candidates, meaning Duque may need to moderate his position to attract wavering voters in the June 17 second round.

"We don't want to shatter the agreement. We want to make it clear that a Colombia of peace is a Colombia where peace meets justice," Duque said in a victory speech on Sunday to cheering supporters, in which he complimented third-place finisher Sergio Fajardo and said their social agendas had much in common.

Fajardo, a center-left mathematician who won 24 percent of the vote, has declined to endorse either candidate for the second round, saying his supporters would make up their own minds.

"It would be disrespectful to say I am the owner of the votes," Fajardo told Blu Radio on Monday, adding that he would meet with his team to discuss options.

All recent polls have predicted that Duque would beat Petro in a second round and that Fajardo was the only candidate who could have posed a risk to the conservative frontrunner if he had made it through.

However, some political analysts in Colombia said that the votes of the centre-left could be enough for Petro to at least mount a serious challenge to Duque, provided he can dodge his rival's accusations of radicalism.

"Petro was quite clearly behind Duque in the vote so that will reassure the markets," said Camilo Perez, head of economic studies at Banco de Bogota. "But the fact that Fajardo was so close to Petro may generate nervousness, as his approach is probably closer to Petro's and that could send votes (Petro's) way."

Colombia's COLCAP stock index was down 0.65 percent, with many investors assuming the election was Duque's to lose. The yield on the local Treasury bond maturing July 2024 slipped to 6.044 from 6.071 on Friday, while trade in the peso currency was closed for the U.S. Memorial Day holiday.

The winner of the second round will face an intimidating array of challenges, from stubbornly low economic growth to threats to Colombia's prized investment-grade credit rating, as well as difficulties in implementing the peace accord.

Some areas abandoned by the FARC have suffered an increase in fighting between criminal gangs and a remaining guerrilla group, the National Liberation Army (ELN), over valuable illegal mining and drug trafficking territories.

Polls suggest the end of the FARC conflict has shifted voters' priorities to inequality and corruption from security issues, opening the door to the left for the first time.

However, a growing crisis in neighbouring socialist-run Venezuela, which has driven hundreds of thousands of desperate people across the border, is a thorn in Petro's side. Duque's camp alleges he would plunge Colombia into a similar crisis.

While Duque has pledged to cut taxes and support private enterprise, Petro has promised to take power away from the political and social elites he accuses of stymieing development.

At his election night party in the capital, Petro struck a moderate tone, though, as both he and Duque seek to attract centrist voters.

"When we talk about defeating poverty, we're not talking about impoverishing the rich, but about enriching the poor," said the bespectacled Petro, surrounded by family members.

In a country where oil and coal are the top export earners, Petro's pledges to end extractive industries have dismayed business leaders and centrists.

"Our country has never lived such a polarized moment as this and Petro represents a huge danger," Mariana Riaño, a 21-year-old student, said at Duque's celebration party at a conference centre in Bogota. "But we are going to beat him."